Opposite the European village of Besiktas stands Üsküdar, the first villaga, or rather town, on the Asiatic shore. Dr Mango dwells on the importance of Üsküdar:

"One of the effects of the Turkish conquest was the integration of Istanbul with its countryside, now safe from enemy incursion and available to serve the needs of the city in food, rest and recreation. In Üsküdar a whole new city arose which replaced Kadiköy as the starting point of caravans and expeditions to Asia. The Turks were also particularly attracted by the Bosphorus, where they sought and developed places of shade and refreshment, trying to recreate in their new home the near-eastern vision of Paradise. The shores of the Bosphorus were gradually filled with large wooden summer mansions (yali), set in walled gardens and often easier to reach by sea than by road."

However, it was again Miss Julia Pardoe who sang praises to the beauty of Üsküdar

"It's gleaming houses crowd the graceful point of land which forms the termination of the mountain-chain that shuts in the Asian side of the Bosphorus, and then falls back only to be bathed at its base by the wider and wilder waves of the Sea of Marmara. Nothing can be imagined more perfectly beautiful than the position of the town of Üsküdar, as it sweeps round this graceful point, and throws the long shadows of its arrowy minarets far across the ripple of the Bosphorus towards the European shore. Clusters of houses are framed in by luxuriant foliage; verdure descends in rich masses to the very tip of the two seas by which it is laved; and not an arrow's flight from its quay stands KIZ Kulesi (Maiden's Tower), a small and picturesque castle, built upon so diminutive a rock that its foundations cover the whole surface, and give to the edifice the appearance of floating upon the waves.

In 1807 Sultan Selim Ill had the Selimiye Barracks built on the slopes of Üsküdar where Florence Nightingale set up her hospital during the Crimean War. The office she used as matron, and the wards, can still be visited. Beyond the iron gates, on the verge of the Sea of Marmara, lies the British cemetery, where the combatants in the Crimean War as well as English surgeons and nurses are buried. Their names throng upon the main Crimean War Memorial at the entrance to the cemetery. The bronze obelisk in grey Aberdeen granite in memory of Florence Nightingale, erected under the sponsorship of Queen Victoria, now carries the bronze centenary plaque in tribute from Queen Elizabeth. Il.

In Üsküdar, Sinan, the Turkish Michelangelo, built the elegant Mihrimah Mosque (1547) for the only daughter of Süleyman, the Magnificent, as well as the Semsi Pasa Mosque on the waterfront of the Bosphorus. Also in Üsküdar are the mosques of ATIK VALIDE built by the wife of Sultan Selim Il, the Sot, and the VALDE-I CEDID built by Sultan Ahmet Ill for his mother in 1710. There are, too, the Ayazma, Selimiye and lhsaniye mosques adorning the slopes of Üsküdar.

The fountains of Üsküdar are all elegant both as to architecture and ornament and exhibit the excellence of the art and practice of calligraphy, engraved and gilded on their periphery.

From Üsküdar the road runs north. The first village after Üsküdar is Kuzguncuk, once inhabited by Jews; it is a quiet residential district. After Kuzguncuk, one passes through a long tunnel under the Palate and grounds of Beylerbeyi (see Bosphorus Palaces), and arrives at Cengelköy, which is famous for its vineyards and gardens, especially for its golden coloured quinces. Cengelköy's beauty is enhanced by the presence of Kuleli Barracks, where, so it is rumoured, Süleyman, the Magnificent, when he was still a prince, infuriated his father Selim I, the Grim, to such an extent that he ordered his Chief Executioner to behead him. However, the Chief Executioner who lived in these barracks kept the Prince hidden there. On his return from the Egyptian Campaign, after an absence of three years, Selim paid a visit to Kuleli Barracks, where the Chief executioner, on the Sultan's expressing his regret of having asked him to execute his only son and successor, produced Süleyman and asked his forgiveness for not having obeyed his command. Both he and the prince were forgiven. The Kuleli Barracks, occupied by allied forces during the Crimean War, burnt down and were rebuilt by Sultan Abdülaziz and converted into a military school in 1872. The road leads on to Vaniköy, where on the hill, 114 metres above sea level is situated the Istanbul Observatory. On the road leading to Kandilli, there stands a fountain, built in 1780, whose water is said to cure kidney and gall-bladder disorders. Kandilli, one of the most beautiful promontories on the Strait, commanding from its elevated position, a view of nearly its whole extent from sea to sea, is eight kilometres to the north of Üsküdar. This is where the Bosphorus currents are very violent and form dangerous eddies. The village has hosted well-known European families; Count Ostrorog, Pierre Loti, Egyptian Khedives and Claude Farröre have stayed in the wooden yalıs on its shore.

The Girls College of kandilli is housed in the palace which belonged to Princess Adile, the daughter of Sultan Mahmut II (1808-1839) on a higher slope. The road then leads to Küçüksu, the famous summer palace of that name; the beach is on the left and you drive through a great meadow which becames a playground in summer when, in boiling cauldrons, cor-on-the-cob is sold hot with a sprinkling of salt. After crossing a small bridge over the stream of Göksu, you come face to face with Anadoluhisarı fortress (see Castles on the Bosphorus).

Anadoluhisarı is a small fishing village housing some old historical yalıs belonging to the rich. The road goes on to the village of Kanlıca, famous for its milk and yogurt and to the Meşrutâ Yalı, one of the oldest Yalıs on the Bosphorus. Built in 1695 by the descendant of the world renowned Köprülü viziers, Amcazade Hüseyin Paşa, who like Mehmet Köprülü became a grand vizier, this wooden sea palace is a red pearl bewitching to human eyes. Here, Nevşehirli Damat ibrahim Paşa, the grand Vizier of the day, gave a memorable reception in honour of Count Vermond, the Austrian Ambassador who was sent to Turkey after the signing of the Passarowitz Treaty on July 21, 1718. The British Ambassador, Sir Edward Montagu, the husband of Lady Mary Wortley Montagu and the Dutch Ambassador were also present at this reception.

Mahmut II used to visit the Meşrutâ Yalı and enjoy its ornate marble fountain in the main lounge and the View from the comer of this room, built partiy on the Bosphorus, listening to the waves lapping and kissing the wooden beams underneath.

The road Winds round the Kanlıca bay, where, once, classical concerts were given on caiques and the sound of music echoed from the European shore; and then one reaches the village of Çubuklu, famous for its gardens and, on the slope, the villa built by the Khedive of Egypt, Abbas Hilmi Paşa. The garden and Che house were bought by the istanbul Municipality and dedicated to the enjoyment of the public. From Çubuklu the road leads to Paşapahçe which became an industruial town in early 1900s. It has an old-established glass factory producing exquisite Objects of traditional and new design for the home and tourist market as well as bottles for spring waters and for the nearby Government distillery. There is also a shoe factory on the road to Beykoz.The town of Beykoz is 18km from the Galata Bridge and is very lively especially on market days. The palace which stands among tall luscious green trees was built on the order of Mehmet, the Conqueror in 1458 when he heard the news of the capture of Tokat fortress in Asia Minor and was named the Tokat Palace. Mahmut I had the palace reconstructed in 1745. The first stone palace on the Bosphorus was built in 1845 by the Khedive of Egypt, Mehmet Ali Pasa. It was presented to Sultan Abdulmecit and renovated by Sultan Abdülaziz and is still seen half-buried by the overgrown trees on the shores of Beykoz and named Beykoz Palace. Selim had a paper factory built here since Beykoz was rich in forests. The town is divided into two districts: Incirköy and Yaliköy. In 1833 the Russian troops camped on the meadows in Yalikoy, the landing stage of which was called Hünkar Iskelesi - literally the Sultan's Pier - which became famous later for the treaty concluded there before their departure. The French author Pierre Loti, as commanding captain of S.S. Vantour, anchored in the Bay of Beykoz during the years 1905-1909 and is said to have written his controversial novel 'Désenchantees' on board his steamer.

Furter into the interior, there are walnut, chestnut, cherry and mulberry orchards. From Beykoz a road forks off over the hills towards Sile and to the Polish refugee settlement at Polonezköy, where the refugees produce excellent dairy products. Another road climbs up to the Giant's Mountain, Yusa Dag or Joshua's Hill, which is 197 metres above the sea level. However, it rises so abruptly from the Bosphorus that it gives one an impression similar to walking under the Lorelei on the Rhine. The traveller commands from there a scene of unparalleled beauty and variety as he looks towards the city - the undulating banks, the glorious strait of the Bosphorus, castled rocks, laughing valleys and bays in front; and far away the cluster of domes and minarets. Caiques come and go like aquatic birds over the ripple; golden and silver sails glide swiftly by and usually green woods change colour as the fresh breeze sweeps through their leafy depths.

Twenty five kilometres from the Galata Bridge is the picturesque village of Anadolu Kavagi, The inhabitants are mostly fishermen and boat-builders. There are fish restaurants and cafes where picnic-goers enjoy the solitude and the seafood. On the northern slope, there stands the noble Genoese Castle which towers above Anadolu Kavagi and is well visible from the European shore. 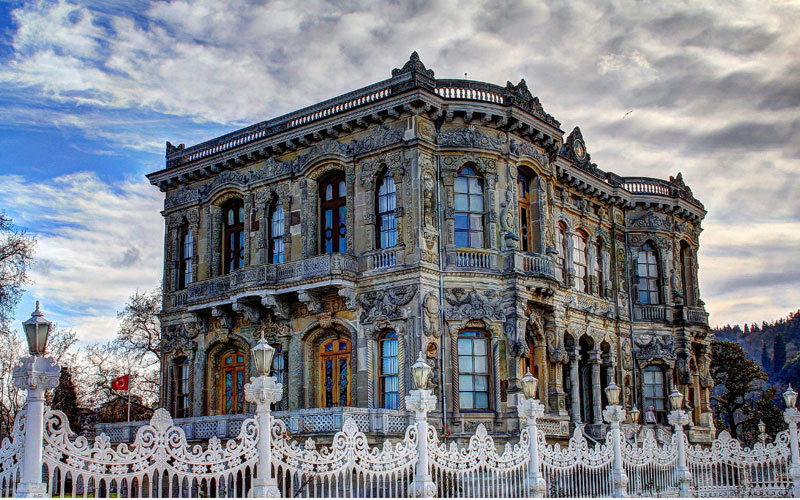 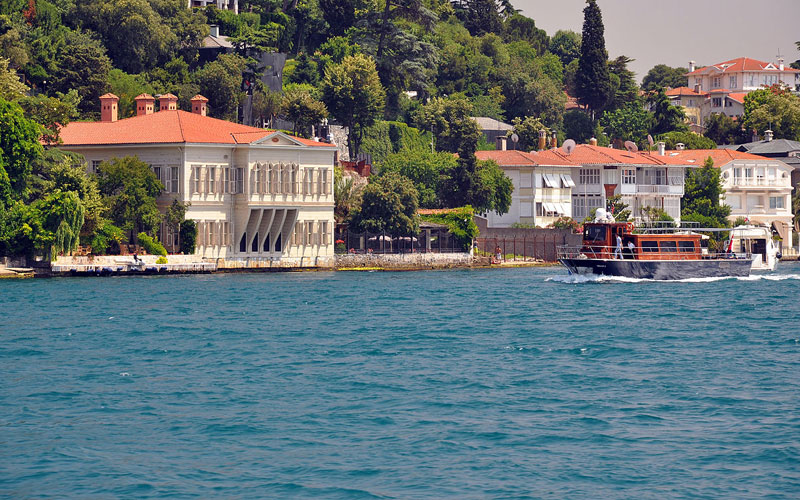 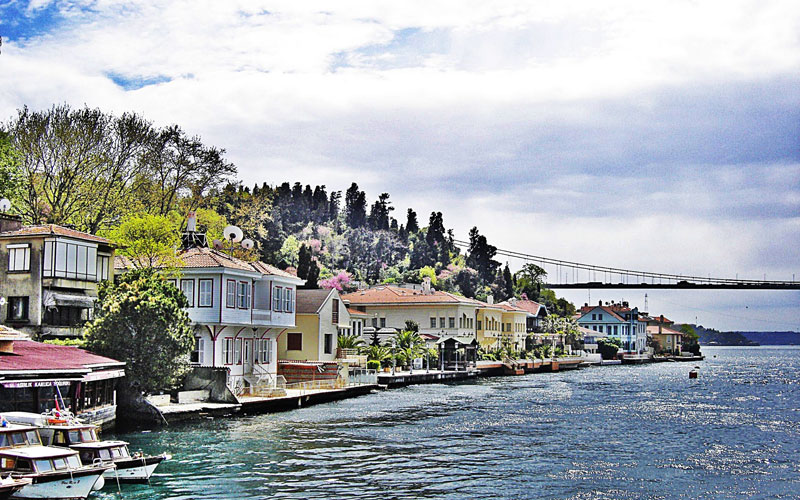