The ruins of the Byzantine-Genoese Castle on the hill, which was established at the junction of the Black Sea and Marmara, watch the passage from a magnificent view. Separated from Beykoz by a wooded area, the main square of this fishing town is full of fishermen's restaurants serving Bosphorus travelers. 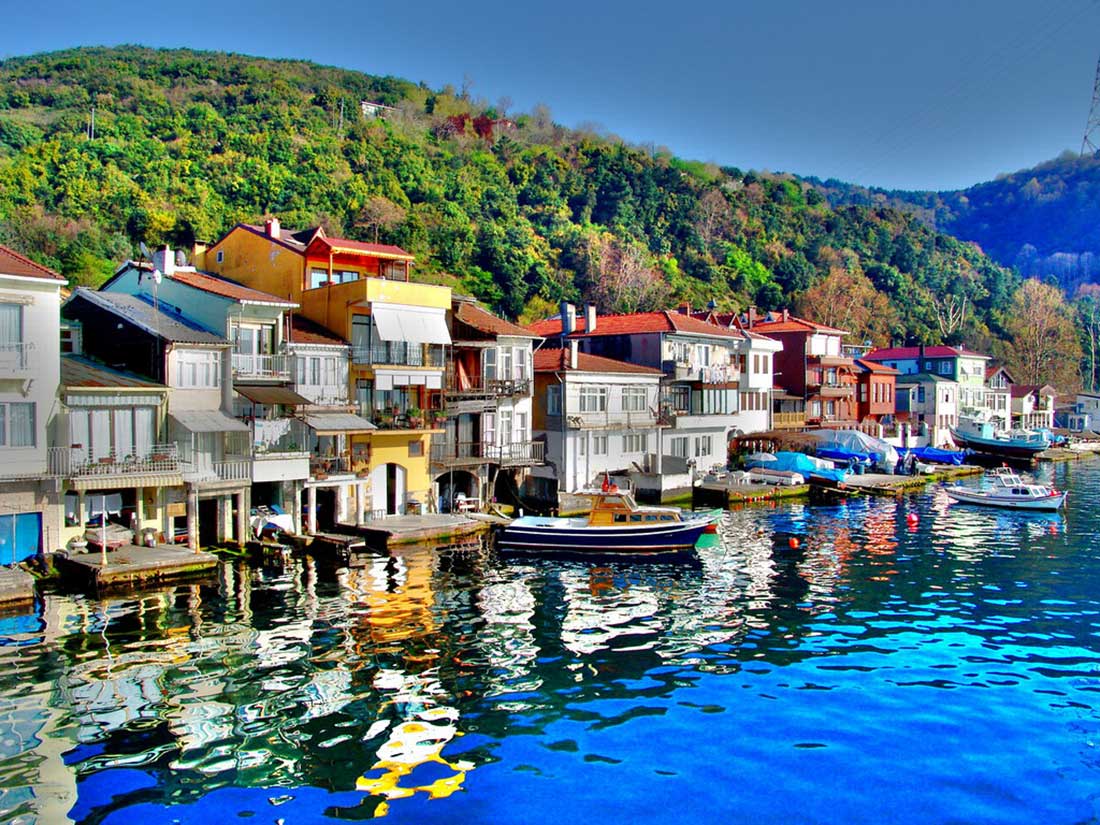 A wind blew from the Black Sea and waves hit the Colliding Rocks (Symplegades), leaving blue foams behind.

Rumeli Kavağı and Anadolu Kavağı coexist with each other, as in the Rumeli Fortress and Anadolu Fortress on both sides of the Bosphorus. Legend has it that Jason, one of the Argonauts, had altars built in both places to express his gratitude when he found the Golden Fleece and returned from Colchis (present-day Georgia) at the end of the Black Sea. In time, temples followed the altars. The temple on the Asian side was the sanctuary of twelve gods and goddesses in ancient Greece. Before sailing to the Black Sea, the sailors stopped here and made dedications to Zeus Ourious (Zeus of the Good Winds). You can get out of the pier to the castle in 20-30 minutes and watch the ships enter and exit the Bosphorus. The slopes and stairs are a bit steep, keep in mind. There are cafes with beautiful views around the castle.

It is thought that Anadolu Kavağı was named after the poplar trees that once grew here. Considering that the word "poplar" comes from the root of "kav" and its meaning is "to close, to hold", it is possible that the region was named after its role as the "border" point where the Black Sea meets the Bosphorus. The Byzantines strengthened these fortresses and used them as a tax point at the entrance to the Black Sea. Life behind the pier, where mostly boats dock, in Anadolu Kavağı is quite calm, and the surrounding is full of fish restaurants. XVIII in the square. There is the Cevriye Hatun Fountain, dating from the 19th century.

The construction of this small mosque in Anadolu Kavağı dates back to 1593. Hacı Ali Reis from Midill, who had it built, lies in his tomb right next to the mosque. XX. The building, which was rebuilt in the century, does not have much of an architectural feature. There are several old tombstones in its garden.

There is no definitive evidence as to when this castle was built on the Asian side of the Bosphorus, but it is believed to have been built during the rule of the Byzantine Palaeologian dynasty. It is possible to think that a cross on one of the inner walls and the four "b" around it (the "basileus" or the "b" of the emperor) was the symbol of the dynasty. It means "He who has ruled over kings, king of kings". In 1352, the Genoese captured the castle and started to receive customs tax. In 1452, Sultan Mehmed the Conqueror conquered both castles, but the unused castles gradually fell into ruin.

It is thought that the name of the castle was derived either from “oros” meaning “mountain” in Greek or “ourios” meaning “good winds”. Today, Rumeli Fortress may look much more impressive, but in its golden age, Yoros Castle was the largest castle on the Bosphorus, twice its size.

The road in the north of Anadolu Kavağı takes you to Anadolu Lighthouse. Located next to a small mosque inside the watchtower, the lighthouse was modernized in 1856 and dates back to 1769. Poyrazköy is located before Anadolu Lighthouse with its small beach. There is not much history, but Poyrazköy is one of the ideal places to sunbathe in the summer months.