St Irini was the first church built by the Byzantines.

While forming his new city, Constantine built a forum, a palace, and a hippodrome in his name, and in 330 he built the church of St, Irini Where a Roman tempel had previously existed. The name " Aya Irini " or "Hagia Eirene" mean "Holy Peace. " According to rumor, in those years there was a saintly person named Penelope who worked to spread Christianity. Idol worshipers lowered her into a snake-filled well--she didn't die. They stoned her, tied her behind horses--still she didn 't die. After these miracles the idol worshipers became Christians. Irini was another such saint. After this episode Constantine had a place of worship dedicated to one single God, and he named it "Aya Irini. 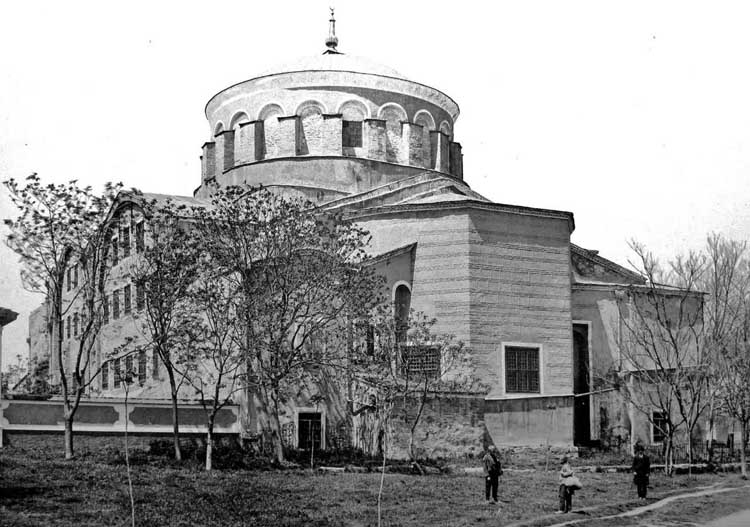 St. Irini is the only Byzantine church remaining today which has an atrium. The atrium was the courtyard surrounded by arches in the center of Roman temples. Features ofthe temple are evident St. Irini. However, today's St. Irini is not the same St. Irini because the first one was made of wood and burned down in 532. The people rose up against the Emperor Justinianos who had forbidden worship of more than one god. Turning to Zeus, they burned both St.Irene and St.Sophia. Both churches were rebuilt. However, St. Irini burned down again in 564. After the two fires, the building was shaken by several earthquakes. It was repaired for the third time and opened to public services.

From the outside the rectangular Church is 42.2 m. Long and 35.7 m. Wide; the eastern wall is polygon-shaped apse and to the West there is a narthex with the atrium in front. A high-ritntned dome covers the main area. The roof is sharply pointed to the north, south, and east, to the west there are arches similiar to domes. In various places of the building artifacts front antiquity, excavated in Birinci Tepe, have been placed. The level of the ground around the church is five meters higher than it originally was. At present the church is entered by a ramp covered with a Turkish-style lean-to roof which leads to the inside area.

The church is shaped like a basilica, but a very unusual one. There is a gallery above the narthex which continues above two sides of the central area. The diameter of the dome above this area is 15.5m. The dome is supported by four huge elephant feet in the cormers, Between them are four circular arches which open to barrel vaults. A combed vault covers the apse. 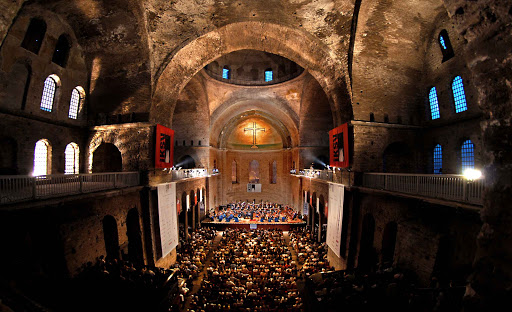 St. Irini became the first Ottoman museum. When the weapons in the depot were outdated, St. Irini was turned into a museum in the 19th century. The two-winged stairway to the gallery was added. The icons which had fallen during earthquakes had not been replaced, so the walls were bare. Today, except for the cross on the half-dome of the apse, and the steps to the pulpit which represent Jesus march up Golgotha Hill carrying the crucifix, there are no remaining motifs.

Since the church was not converted into a mosque, no major changes were made after 1453. It was used as a booty and weapons depot for many years. In 1846 Damat Ahmet Fethi Pasha, field marshal of the cannon foundry, exhibited pieces which made up the first mucleus of Turkish museum in St. Irini. In 1869 the Church was given the name Muze-inHumayun" (Museum of the Empire). In time the exhibition space became limited, and the works were moved to the "Tiled Kiosk. From 1908 on St. Irini was used as the Military Museum. Later, having been left vacant for some time the building was repaired and brought under the administration of the St. Sophia Museum. Presently it is used as a concert hall. 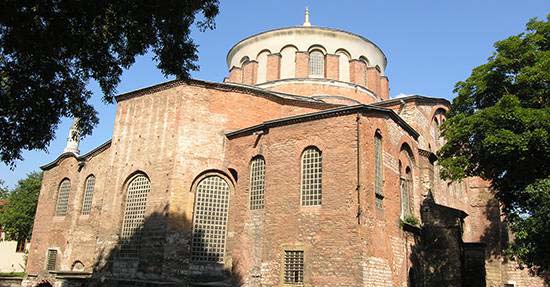