On a hilltop a just west of Beykoz stands an imposing marble mansion designed by Sarkis and Nikogos Balyan for Kavalali Mehmed Ali Pasha, who, as Governor of Egypt, led an uprising against the Ottomans. 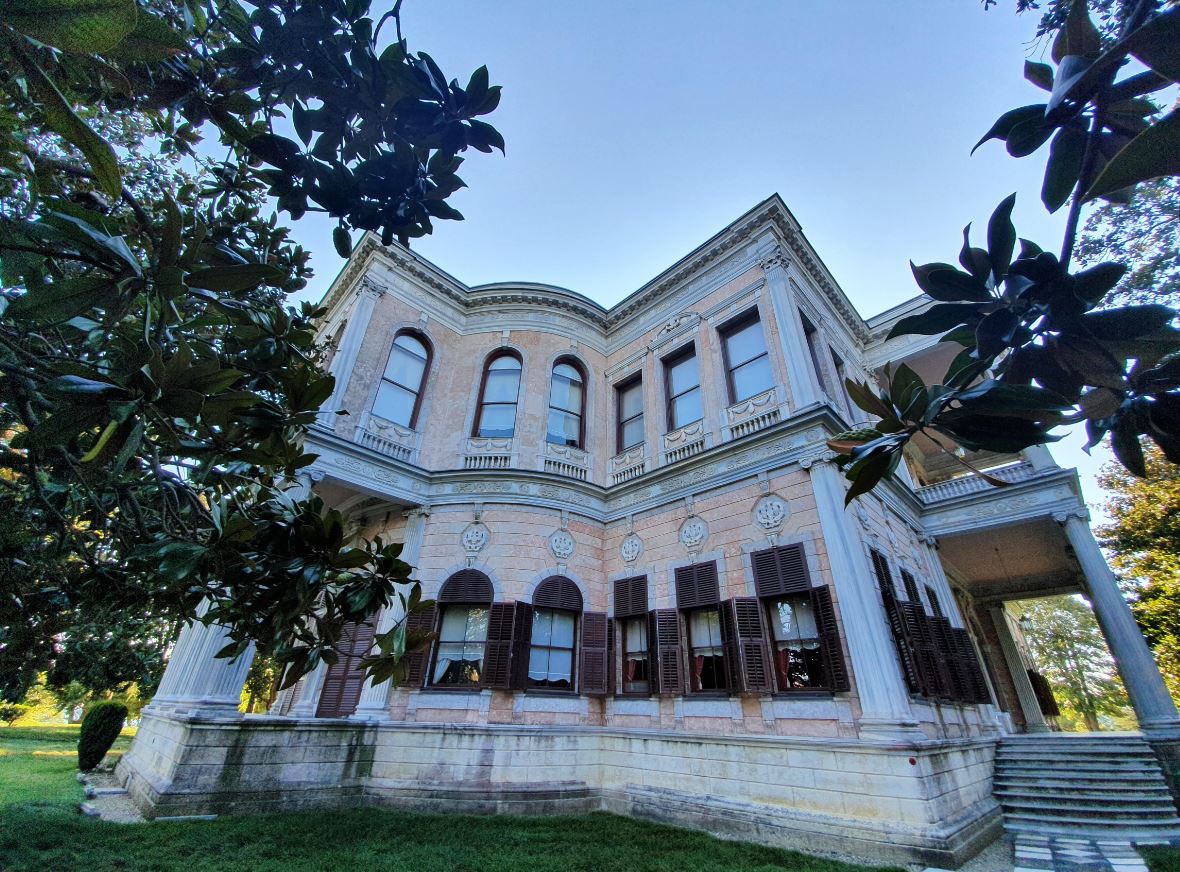 This was only suppressed with Russian assistance, and the Treaty of Hunkar iskelesi, signed in Beykoz in 1833, resulted in the Ottomans having to cede to the Russians the right to move their warships through the Bosphorus and Dardanelles. To try and make up for this, Mehmed Ali began work on the mansion in 1855 during the reign of Sultan Abdülmecid; his grandson Said Halim Pasha saw it through to completion in 1866, by which time Sultan Abdülaziz was in charge of things. 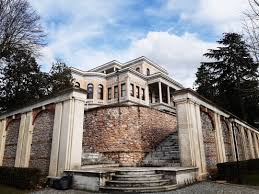 Sitting atop a square plan, the mansion appears to be a three-story structure from the outside but is really comprised of two floors. The glass-enclosed lighthouse found over the middle part of the living room on the second floor is the reason why the structure looks this way from a distance. With an exterior clad in marble, the mansion is entered via a portico with marble columns. Clad from end to end in polychrome porphyry, the structure features a spacious, 13x26 m salon. A large chandelier decorates the living room ceiling and the wide windows are covered by priceless curtains. The seven-meter high ceiling is partitioned into squares adorned with large hub motifs comprised of flowers and twisty branches. The living room has wooden slate flooring. There are four rooms illuminated with wide, vertical window in the corners of this spacious living room. 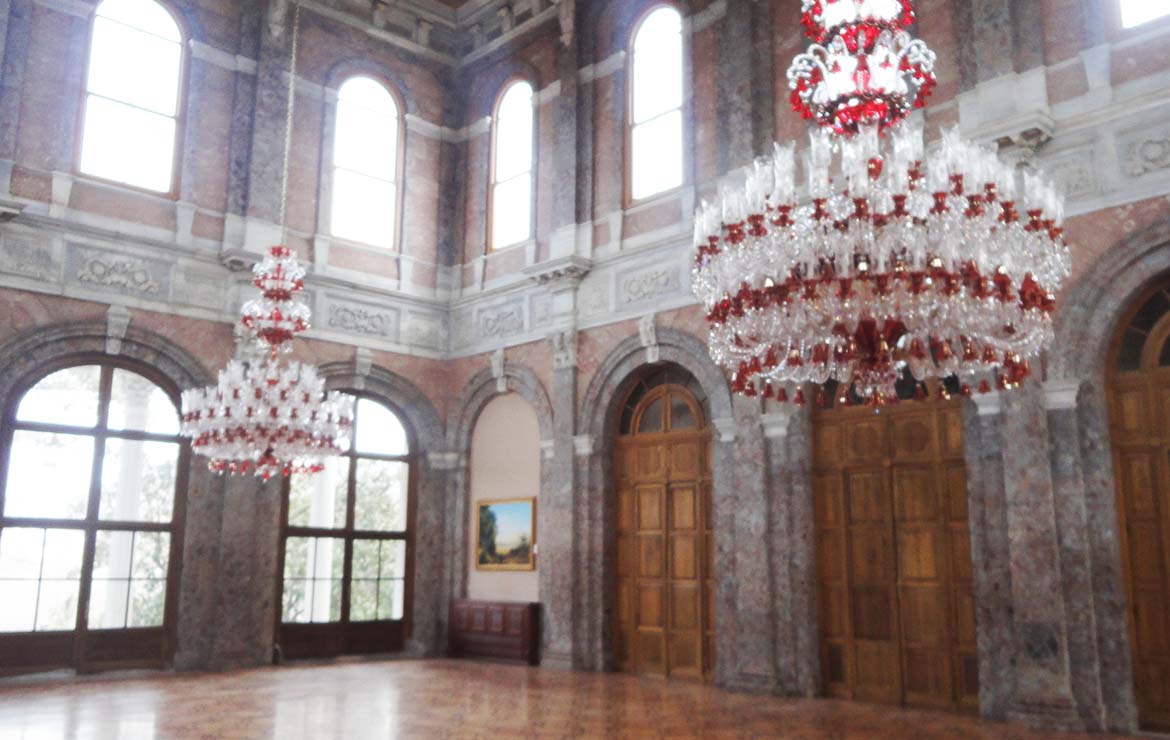 "Kavalali Mehmed Ali Pasha commissioned the construction of the Beykoz Mansion within the Beykoz Woods in 1846. The foundation of the mansion was laid by Mehmed Ali Pasha, who passed away before its completion, which was realized during the time of his youngest son, Said Pasha. This oval-shaped staircase is found to the left of the mansion's lower floor salon. The staircase was made into a double staircase, each revolving around severed column."

"A view of the mansion's splendid salon on the second floor. While the overhead crystal chandelier provides the salon with more illumination, it is why the structure appears from the outside to have three-stories. The ceiling of the salon is higher than the lower floor and is divided into decorative squares. Hub motifs comprised of flowers and twisty branches were crafted into the middle of the squares. The three beautiful chandeliers hanging from the ceiling compliments the décor of the salon. The first-floor plan Beykoz Mansion."

The section found at the top of the staircase is covered by a rather ritzy dome. The red chandelier hanging from the hub of the dome matches the chandeliers in the salon and compliments the opulent décor. The elliptical staircase to the left of the living room provides access to the second floor. The lower plan was repeated on the second floor. The seaside facade features two balconies, each positioned over four large columns. Presented to the sultan after it was constructed with meticulous craftsmanship, this fine structure accommodated the Zeybeks who came from the Aegean region during the Crimean War. Prince Napoleon also stayed at this mansion during his passage through Istanbul on his return from the Crimean War. The wife of Emperor of France, Napoleon III, Empress Eugenie was accommodated here upon her arrival in Istanbul after the inauguration of the Suez Canal. Subsequent to Sultan Abdülaziz, the mansion was renovated for the coronation ceremony held for Sultan Abdulhamid II in 1880. Nevertheless, the mansion remained sealed up as its upholstery rotted away for several decades after this period. In 1910, the Chairman of the Assembly of Deputies of the 2nd Constitutional Monarchy, Ahmet Riza Bey obtained the permission of Sultan Resad to host a spring banquet for the deputies and state dignitaries, whereas all the rotten furnishings were replaced. Utilized as a dormitory for orphaned girls during World War I, the mansion later became a temporary shelter for immigrants who came from Thrace and the Balkans. After the proclamation of the Republic, the mansion became public property and was first allocated to the Bosphorus Command; it was allocated to the Ministry of Health in 1953. After serving as an orphanage and hospital, the mansion was transferred to the administration of the Directorate of National Palaces in 1999. The large grounds feature a European-style grotto studded with seashells, but the mansion is currently not open to the public.

"A view of the mansion's lower floor salon. Similar to the salon on the upper floor, the ceiling of this room is not as high. Embellishments placed within squares are also seen in this salon."