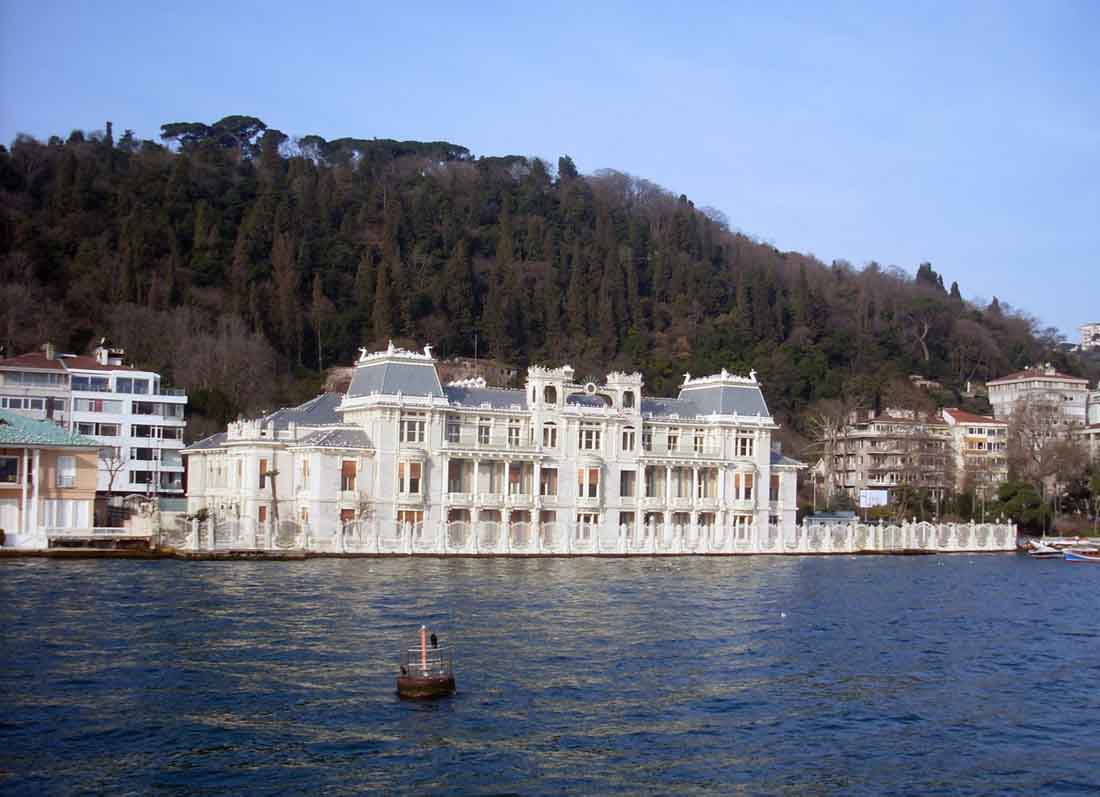 Besides its architecture and style by the architect Raimondo d'Aronco, this early-20th century shore palace dominates with its position and size. 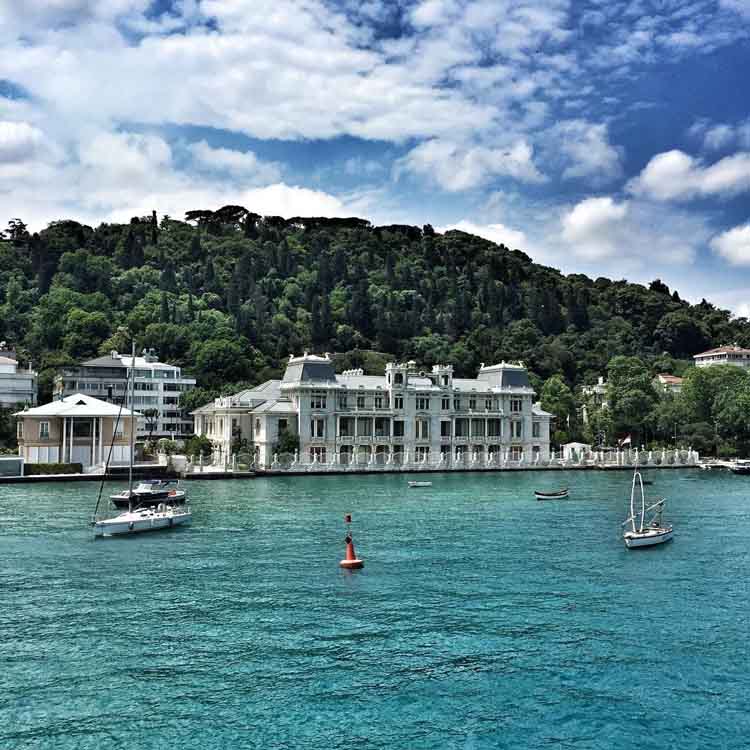 Also known throughout the years as the `Emine Valide Pasha Palace', Hidiv Ismail Pasha Valide Pasha Yali', Hidiva Sarayi' and 'Egyptian Consulate Palace', the structure we see today is the third building erected on the premises.

The first structure here was the Seyhulislam Murizzade Mehmed Ataullah Efendi Yali, which was erected during the reign of Sultan AbdulHamid I. One of the famous structures of Bebek, this wooden yali dated back to 1781 and was to become the residence of Kadiasker Durizzade Arif Efendi during the reign of Sultan Ahmed III. The yali was transferred to the final Seyhulislam Abdullah Efendi upon Arif Efendi's death in 1800.

This yali fell into disrepair during the subsequent years and was demolished to be replaced with a new yali by Rauf Pasha, a grand vizier of Sultan Mahmud II. This yali was acquired later on and renovated by Ali Pasha, a grand vizier during the Tanzimat Reform Era. Many important meetings were held at this yali during All Pasha's time, such as the Montenegro Conference (1858), banquet for the British heir apparent, Edward (1869) and Austro-Hungarian Emperor Franz Joseph (October 1867). 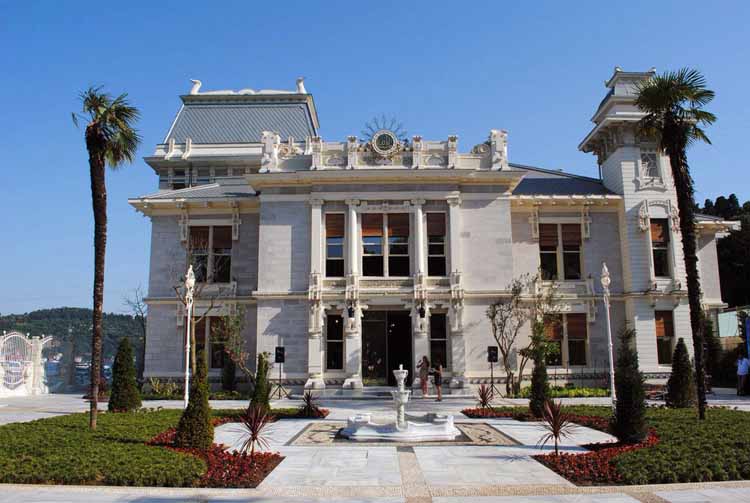 Subsequent to the death of All Pasha, Sultan AbdulHamid II acquired the yali from its inheritors, and gave it to Emine Valide Pasha as a present. The mother of the last Egypt Khedive, Abbas Hilmi Pasha, Emine Valide was bestowed the rank of 'Pasha' by Sultan AbdulHamid II. Emine Valide Pasha became the only woman in Ottoman history to receive such an honor. Later on, Emine Valide Pasha had this gift of a yali demolished, commissioning the architect d'Aronco to build the shore palace we see today. The date plate on the building indicates it was built in 1902. Residing at this shore palace with her son Abbas Him' Pasha many years, Emine Valide Pasha wanted to endow it to the Republic of Turkey as the Ottoman State had ceased to exist. According to the rumor, Valide Pasha became livid during the official communiques when she was addressed as 'Emine' instead of Valide Pasha' as the title of `Pasha' had been lifted with the proclamation of the Republic. Backing out of her decision, she bequeathed the yah to the Egyptian Government on condition that it was used as an embassy (a consulate after the embassy was moved to Ankara in 1923). Valide Pasha granted the yali to Egypt under the provision that she was allowed to live in the hunting lodge for the rest of her life, which she did until her death in 1931.

The hunting lodge was demolished after she passed away as per her last Will and Testament. Still utilized as the embassy building of the State of Egypt, this giant structure sits on an 1800 m2 foundation; it has a total utilization area of 5000 m2, spread over two full floors, a squat third floor and the attic. Comprised of the harem (south section) and selamlik (north section), this shore palace features a winter garden where these two sections merge. There are three entrances in the north, south and west directions. The tall towers positioned on the left and right winds of the seaside façade are covered with steep roofs, giving the structure a monumental look. Then again, the balcony highlighted with a tower-shaped double-canopy in the center of this façade as well as the khediviate coat-of-arms are striking. The seaside and side facade features rich embellishments comprised of bands, cornices and coat-of-arms. 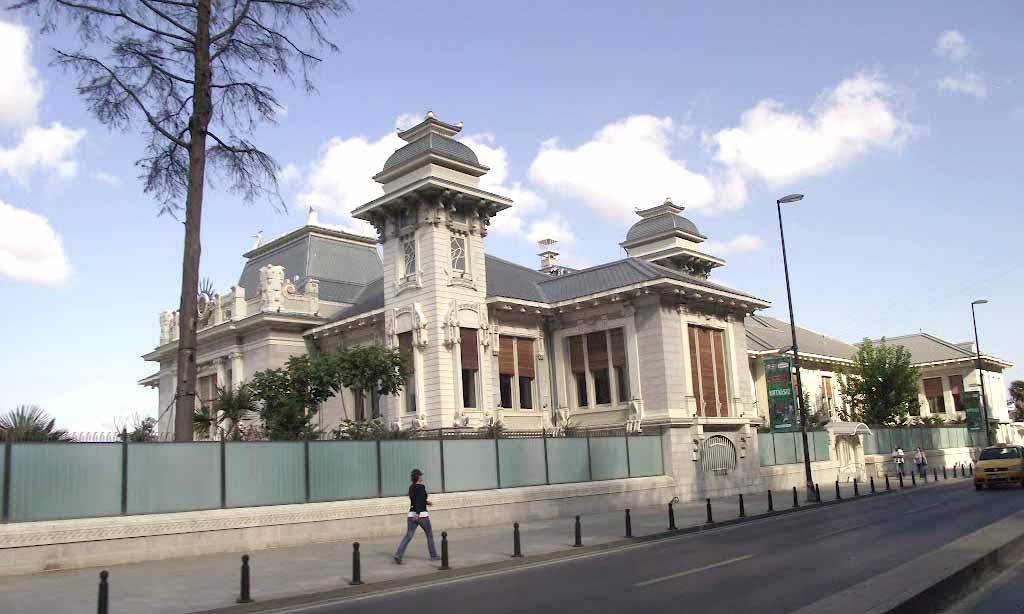 The cassette found at the middle of the roof features the script Ya Hafiz, Ya Emin', which are the names of 'God Looked in the Face' in Arabic within the Sun of Mahmud II.

The ten rooms on the seaside façade and nine rooms on the landside façade of the yah's first floor are of various sizes. The second floor was built in close proximity to this plan. There are rooms and halls only on the seaside façade of the third floor. There is a narrow hallway between the rooms and middle hall on the seaside and garden façades on the second floor. The upper floor of the selamlik section features a large reception hall and an expansive dining hall. There are dining and music chambers in the harem section as well. The walls of the halls in this section are mainly covered in pink and green cloth and paper.

Wrought iron staircases crafted with floral designs reaching the top floor were positioned across from the halls. As is the case with many yalis of the Bosphorus, the Valide Pasha Yali leans against a large wooded area to the rear. Although the road passing through here separated the woods from the yall over time, a connection with the woods was made with a underpass, in keeping with the good taste of those days. These small bridges-passes that ensured connections with the woods situated behind many of the yalis during that period were removed during the early years of the Republic. The jetty that connects this tremendous yah to the Bosphorus shore is a remarkable 76 meters long; it is covered from top to bottom with iron bars. After an extended restoration project, this fine coastline palace, one of the finest structures on the Bosphorus has regained its former glory.