The woods encompassing a twelve-acre area between the districts of Emirgan and Istinye are situated on foothills and slopes. Covered with cypress forests, this region was known as Kyparados during the Byzantine era. 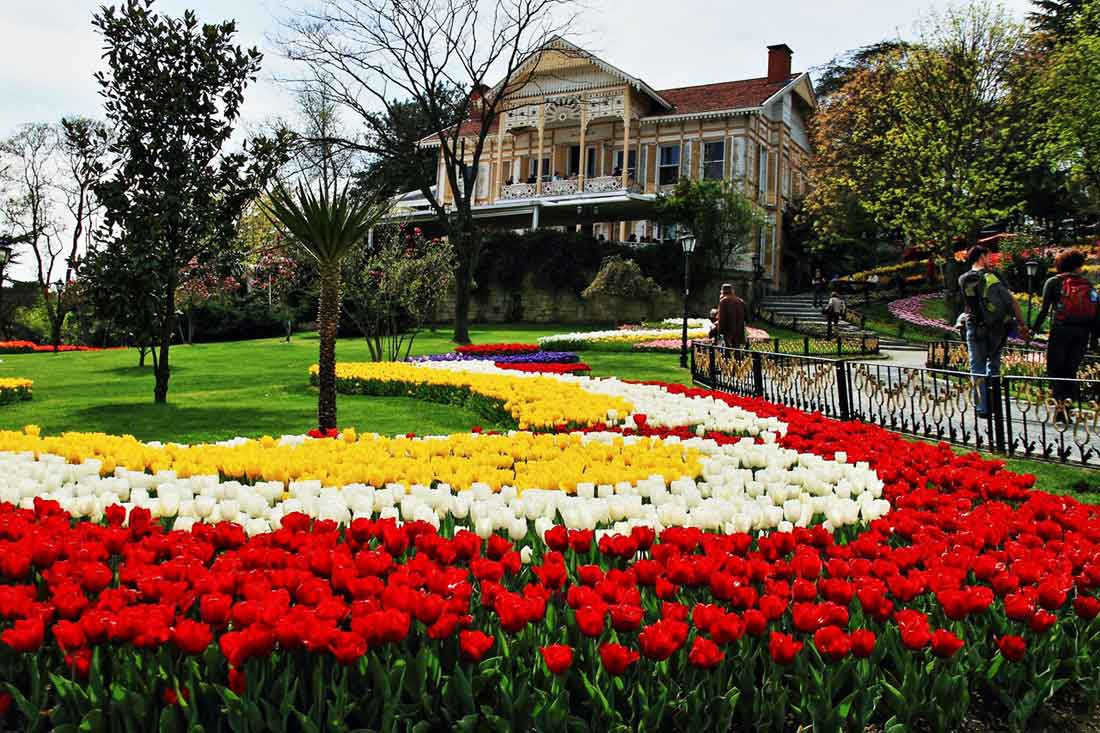 Remaining as state land during the Ottoman era until the 16th century. the land was granted to Nisancý Feridun Bey by Sultan Mehmed III. In arranging the garden landscaping of this land, Feridun Bey also had a summer pavilion and a hunting lodge built here. Emirgan was originally called Emirgune after Emir Gune Khan, an Iranian nobleman who had surrendered the castle of Yerevan (capital of modern-day Armenia) to Sultan Murad IV without a fight in 1635. In return for this, the sultan brought him to Istanbul, renamed him Yusuf Pasha, and gave him what were then the Feridun Bey Gardens and are now the 500,000 m2 Emirgan Woods. 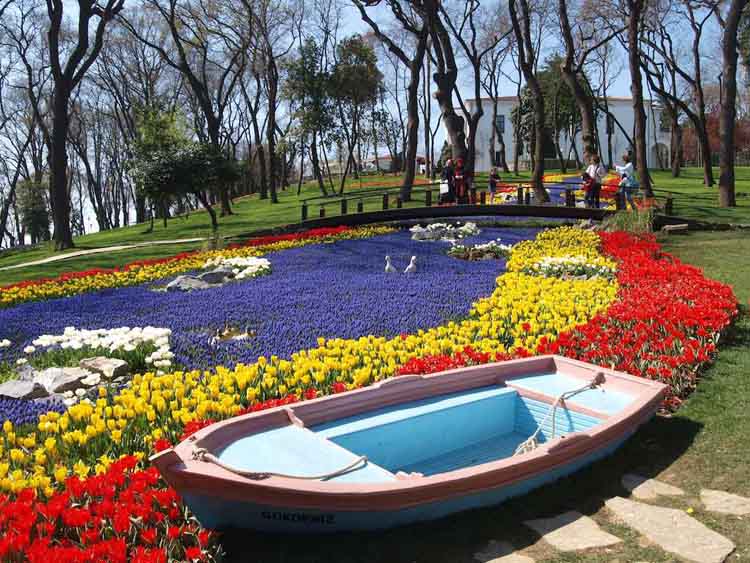 Just as many things changed quite suddenly during the Ottoman era, the son of Emirgune, Tahmasb Kulu Khan's fate changed with the death of Sultan Murad IV. While Tahmasb Kulu Khan was sentenced to death, his property was forfeited, whereas his garden and yali was given to Grand Vizier Kemankes Mustafa Pasha. In the 19th century Sultan AbdulAziz gave the woods to the Egyptian Khedive Ismail Pasha (1830-95) who built himself a seaside palace and then adorned the garden with the Sari (Yellow), Beyaz (White) and Pembe (Pink) Pavilions. Moreover, he also landscaped the woods into a wonderful park. The two ponds constructed by Ýsmail Pasha are adorned with artificial tree embankments and balustrades. Though the woods were divided amongst the three sons of Khedive Ismail Pasha after his death, they were ruined due to the indifference of his heirs. The woods changed hands again during the subsequent period; in 1943 the Istanbul authorities bought the Emirgan Woods and turned them into a public park. 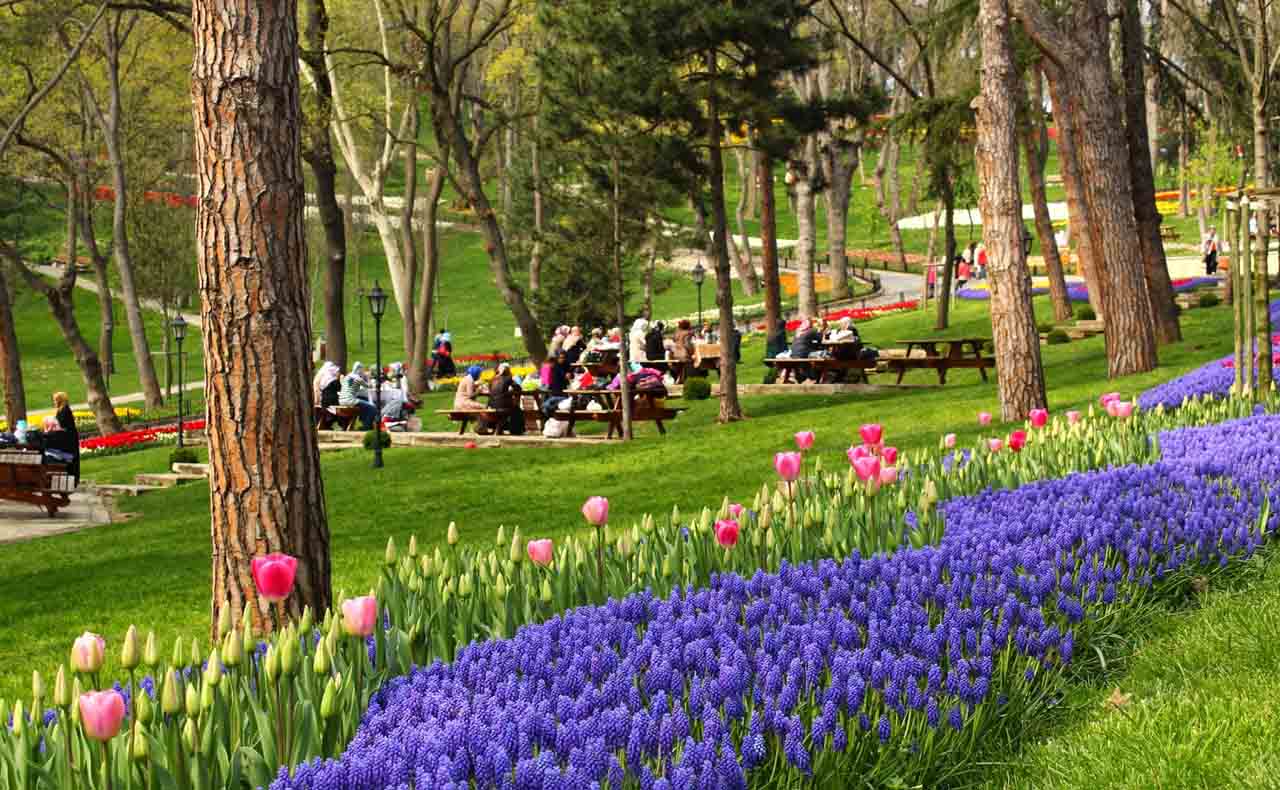 Ismail Pasha commissioned the architect Sarkis Balyan to construct the Sari Pavilion in the woods between 1871-78. The chalet-style pavilion is known for its living room embellishments and ceiling decoration. comprised of two floors over a basement, the plan layout of the pavilion Treasures a central hall surrounded by rooms. The top floor has three rooms and a living room while the lower floor consists of four rooms, a hall and a kitchen. There are flower motifs and oil painting figures cloistered in the pavilion's ceilings. Featuring characteristics typical in carving handicrafts in the exterior embellishments, the upper and lower floors of the pavilion have wide balconies. It has been converted into a terrace overlooking the Bosphorus, whereas the retaining walls are braided with yellow stone. "The Sari Pavilion was commissioned by Egyptian Khedive Ismail Pasha amidst the woods between 1871-78. The embellishments of the salons as well as the ceiling decorations are striking in this chalet-like pavilion."

"The two-story ashlar block Beyaz Pavilion is the largest structure that Khedive Ismail Pasha had built in these woods."

The second pavilion built by Ismail Pasha in the woods was the Pembe (Pink) Pavilion, which was constructed in the manner of a true Ottoman home. The wood siding pavilion is painted a pink geranium color. The two-story pavilion has three entrances: a protocol door, a front door and a personnel door. The front entrance is comprised of a large living room and two rooms that open into this living room. There is mention of the existence of a secret room at the entrance from the protocol door. Besides this room, the floor also features three other rooms, a kitchen and a bathroom. There is a large living room and two rooms that open into this living room on the top floor, accessed via a wide staircase. The doors of the other rooms open into the corridor which is passed from the living room. There are five large rooms and two trunk rooms in this section. Ascending the staircase of the Pembe Pavilion, which garners attention for its top floor room bolstered by four columns, as well as for its wide windows, which allow plenty of light into the former residence. Renovated by Turkish Touring and Automobile Association in 1982, the Pembe Pavilion was subject to another major renovation by the municipality in 1995, painting it to match the original color.

The Beyaz (White) Pavilion is the third and the largest of the Emirgan Woods pavilions. This two-story pavilion is of the neo-Classic style and has a nearly rectangular plan. The structure was built from blocks of stone which were plastered over. The balcony found over the entry hall is surrounded with Corinthian order columns. Upon entering through the front door, there are rooms lined up on two sides. The top floor is accessed via a staircase that begins as a single branch and then breaks off into two branches. The order of this floor is the same as the lower floor. As is the case with the other pavilions of the woods, this one is also open to the public.

In addition to these beautiful pavilions, these woods feature 120 tree varieties such as red pine, Aleppo pine, Himalaya cedar, Conic spruce, which are surrounded by walls. Besides these, the 48 different types of tulips planted in the manicured gardens of the woods transform this place into a palette of color every tulip season as these beautiful gardens also host the international tulip festival.

"A cornucopia of hues splash out during tulip season in the woods, where numerous arboreal delights have also thrived. 48 different species of tulips are planted in these woods, which host international tulip festivals. One of the three pavilions that Khedive Ismail Pasha commissioned to be built amidst the woods was Pembe Pavilion. The two-story pavilion derives its name from the geranium pink color of its outer wood sidings. Overlooking the Bosphorus within panoply of green, the Emirgan Woods represented one of the city's important green areas and continues to do so today." 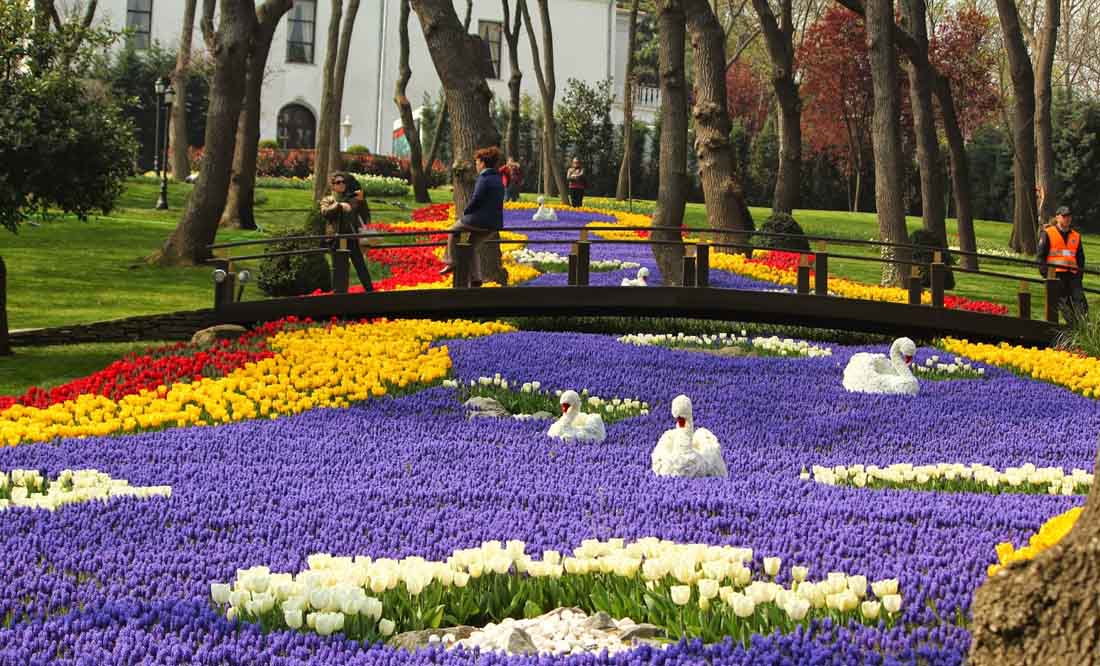