A few paces from the modern centre of Edirne is the first Friday mosque (Ulu Cami) which became old when the new Friday mosque, the Uc Serefeli Cami, was built. It was begun in 1403 when Suleyman Bey was the master of the European provinces by grace of the conqueror Timur. 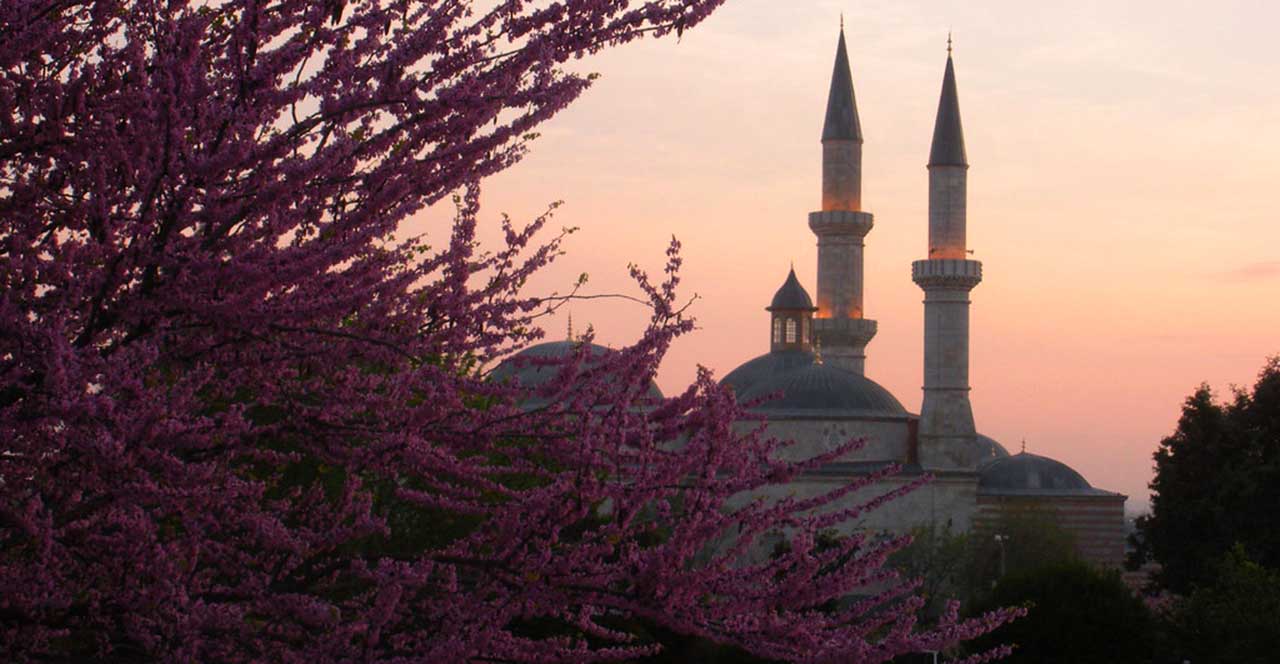 It continued to be built during the brief rule of his brother Musa and finally was completed by Mehmed I in 1414. There is a portico, but the concept of a court had not yet matured, and it was proceeded by an open space which has lost its boundaries to roads and buildings. The inscription over the door states that the architect was Haci Aladdin from Konya which was the birthplace of many Seljuk builders in the past. His assistant was Omer bin Ibrahim.

Architect was a difficult concept at this period of Ottoman construction although that of engineer (mithendis) was a very real one. Men were trained in the traditions of secure structure eventually to graduate, perhaps only in middle age, able to build sound echoes of the past with their domes properly supported on stalactite squinches or in the Byzantine manner.

The Eski Cami measures 49.5 m square and has nine domes 13.5 m in diameter and therefore is seen as the modest heir of the 24 dome Ulu Cami in Bursa where the domes are only 10.60 m wide. A plurality of domes is the engineers' admission of their inability to cover so large a space in any other way. Here the middle dome before the door was originally over inner court and fountain with an oculus in the Bursa style but this has been closed and the washing facilities set along the wall of the portico, a pragmatic decision like many taken with old buildings in trouble. This was damaged by the great earthquake of 1752. But the multidomed hall even when it reached Bursa was alien to Ottoman taste. Because the domes are larger than those of the parent mosque the free-standing piers are reduced to four and so the atmosphere is less compartmentalized and fluid spaces unite the whole interior.

The mihrab and mintier are handsome and of the period but the paintwork is the result of continuing repairs. It bears no relationship to the original could have been related to that of the Muradiye. But the mosque is famous the splendid giant inscriptions bearing the name of the Prophet and the caliphs. 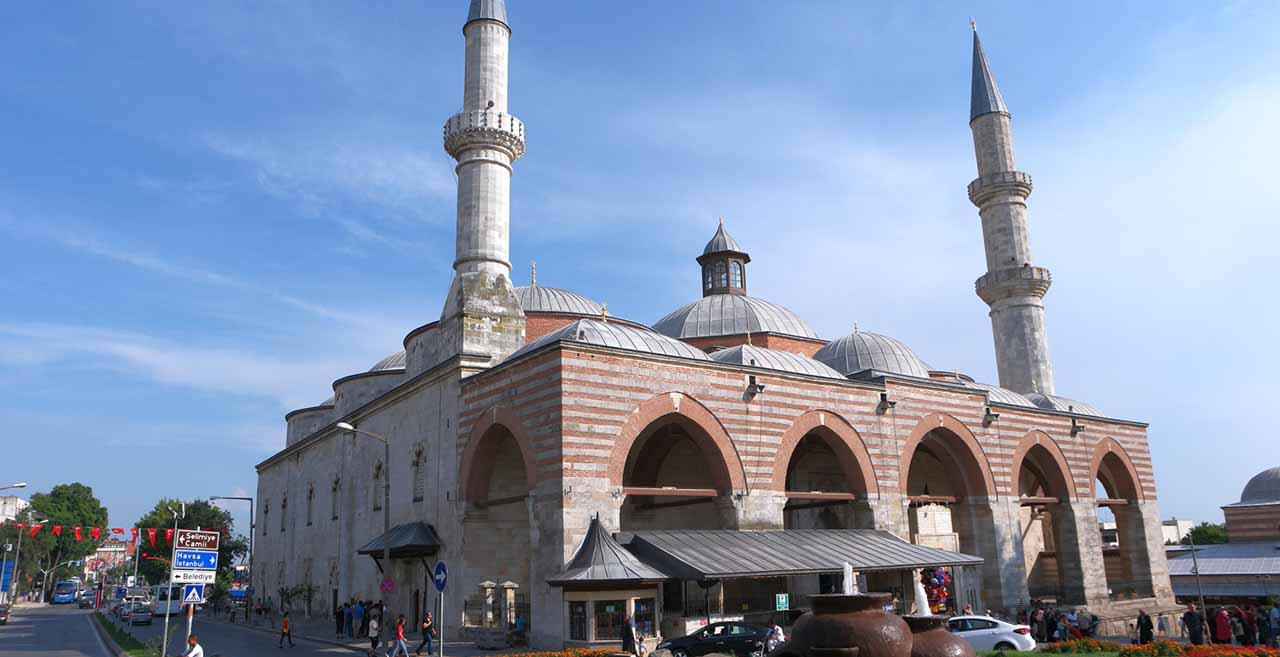 On the piers are quotations from the Koran as there are at Bursa. They date from the 18th century or later when this kind of decoration flourished but are unlikely to be earlier. The sweep of the letters is dramatic, and one word can take command of a whole bay although simply black brush strokes upon white plaster. What a brush and what a giant! These inscriptions appear outside as well as in. The mosque boasts a fragment from the Ka'ba, the black stone of Mecca, in the window to the right of the mihrab.

Outside, in the now habitual north-west corner of the facade the thick-set minaret stands apart from the building either because it was added later, when it would be dangerous to disturb the foundations of the buildings, or more likely it was considered too big to be integrated with it in the first place. It has been attributed to the architect of the first minaret of the Uc Serefeli mosque on grounds of style. It is a tribute to the Selcuk past and carries two balconies. A second minaret, altogether smaller, is perched on the north-east corner of the mosque where its structure was strongest. It is said to be the original minaret, truncated though it be, but it is much later in style and could only have been a replacement. Surely, the great minaret pre-dates it.

Sufficient to punctuate the long low wall that runs in front of the complex. Beyond the arch the paths lead to the refectories, the mosque or the hospital proper. This last is on the right and is the best to follow in order to understand the organization. It first leads to the spacious medical school built in the traditional manner of 18 cells and a teaching hall on three sides of a courtyard with a central foundation. This important training hospital rivalled those of Mehmed II, Suleyman the Magnificent and Ahmed I in Istanbul. The staff included surgeons and an occultist as well as store men, porters but only one cook. He must have had a considerable kitchen staff. Latrines neatly divide the school from the precincts of the hospital itself. 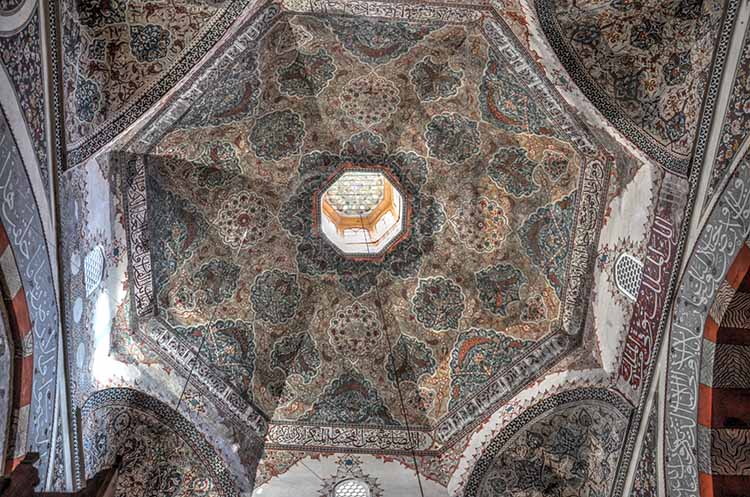 Through a postern gate is an enclosure with a cluster of three - domed rooms rather than cells. They were probably an office, a dispensary and the mortuary where the laying out of the dead was performed since hospitals and obituaries are synonymous. On the right is a long colonnade with handsome marble columns which shelters seven rooms rather than cells probably for the seriously insane. These have been altered during the last restoration but originally each had a dais with staples in the wall and holes in the floor which suggests that the violently mad were chained here in the manner predicted in a satirical miniature in the Shah name of Ahmed I, dating from the early 17th century. There are windows but whether visitors were permitted to peer through them as at other asylums is doubtful. From here an arched gate surmounted by a stalactite half-dome leads into a smaller courtyard with two double domed halls on either side, the function of which is disputed.

One is said to have been a laboratory and the other the operating theatre if such places existed in the 16th century. In addition, there are two summer recesses each bound by large cells. The two which join the wall of the main hospital hall are misshapen. Perhaps this group of buildings was meant for rational patients since the victims of accidents or attack must also have been treated here. The diseased and aged presumably died at home. The next gate leads into the heart of the hospital. This great chamber has a dome over a large pool with a fountain. The dome is carried on an octagonal drum although the overall plan is hexagonal. Six cells and six bays radiate from the large central space and because the plan is hexagonal it distorts the shape of the rooms into fanning pentagons and this is a reason, together with the wasteful thickening of some walls, for not using such a plan. 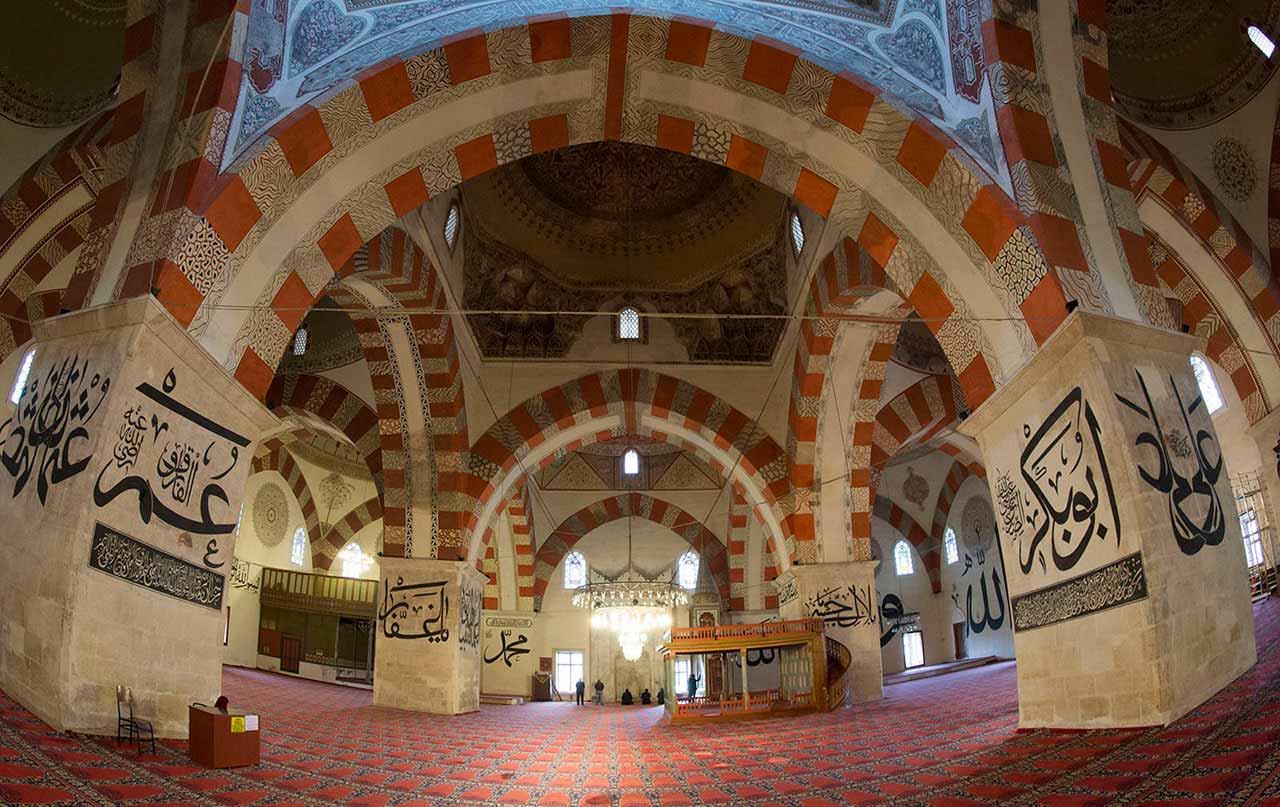 It is evidence that the hospital was the work of Hayrettin who liked to break with the rectangular form. At Amasya the college of the Kapiaga was built to an octagonal design with more wasteful infills still. The sixth alcove is extended by a well-lit apse and it is here that musicians would have played for there is no reason to doubt Evliya Celebi when he states that three times a week music calmed and cheered the inmates. They were also soothed by a diet of vegetables and fruit together, one must presume, with yoghurt and bread. Clearly this was the area which was reserved for those who were suffering from melancholia of one kind or the other since it appears to have been the commonest form of mental disturbance at the time. It is probable that this was due to the quantities of narcotics which were consumed - above all, hashish. While the rich might enjoy the best refined and fragrant supplies the common folk had to put up with inferior quality. Beyond the hospital is the mosque and its spacious courtyard which is three times its area.

Were it not for the mosque which Suleyman the Magnificent was to build for his father, Selim I, in Istanbul this would the ultimate achievement of the concept of the single-domed unit which underlies all Ottoman architecture. For it is a single square chamber 20 m in diameter with the dome supported on pendentives which spring from the corners of the room, an arm's length above the worshippers, with a spectacular sweep. only the other element, besides the mihrab and the minber, is the large Htinkar Mahfili for the sultan, happily not disfigured with lattices. Left and right, fine doorways. open into the buildings on either side which are independent structures their own doors into the outer precinct but with none into the courtyard's grazing explain why the lower windows of mosques are grilled against intruders. Elsewhere it could be small boys. The wings are identical and consist of a crossing beneath a dome with an oculus to admit light and air which is now glassed over. Each of the four rooms beside the bays has a hearth with a hood. In palaces the hoods were of bronze but here as one in decay shows they are of plaster over iron hoops somewhat like a crinoline. The logs were stood on end and there must have been a plentiful supply.

These hostels were for dervishes and by implication there were many of them. They had not come to the hospital out of curiosity or because they were breaking a stage on their journey unless it were their spiritual journey. For what is missing from the list of salaries and wages of those working at the hospital is any mention of nurses and it may be assumed that it was the dervishes who performed their duties. And here they lodged. The twin minarets, emblem of a sultan's foundation, rise in the north-east and north-west corners where the hostels also obtrude. For this reason, the observant may note that the masons at work on the minarets took no notice of the plan of those working on the dervish hostels (tabhanes) with the result that windows are half blocked. It is, in one sense, a question of learning by rote. The tall minarets are of the by now standard stone type and have been lovingly restored. Across the grass a long low-lying building contains the great kitchen and refectories each side of a grass yard.

One must imagine trays covered with leather against snow or rain carried by dervishes to the patients as monks or friars might have done in Europe. The huge hearths have lost their form but something of the size of the undertaking may be appreciated. The bake-ovens are in a separate block across the delivery bay. There kilns have been set up by Marmara University to bake pots not loaves. Again, an idea of the size of the ovens can be gained. The store can be entered from the bakehouse or through large doors onto the compound. It is the plainest of rooms and softly lit because the windows have been squeezed into arrow-slits in order to frustrate winged vermin, which were just as bad as those which scuttled over the flagstones, from pillaging grain and other goods. With its shed roof supported on the walls and three piers in its centre this mere larder 25 m by 12.5 m is a grand chamber however austere it may be. The visitor may now go out and relish the wildflowers both within and without the precincts or else the calm of the Tunca river and the trees on the farther bank and recall summer evenings in the 17th century and before.