Situated in Beylerbeyi, one of the most exceptional districts along the Bosphorus, the early-19ft century Hasip Pasha Yali is the largest of the same type of structures found on the Asian side of the city. 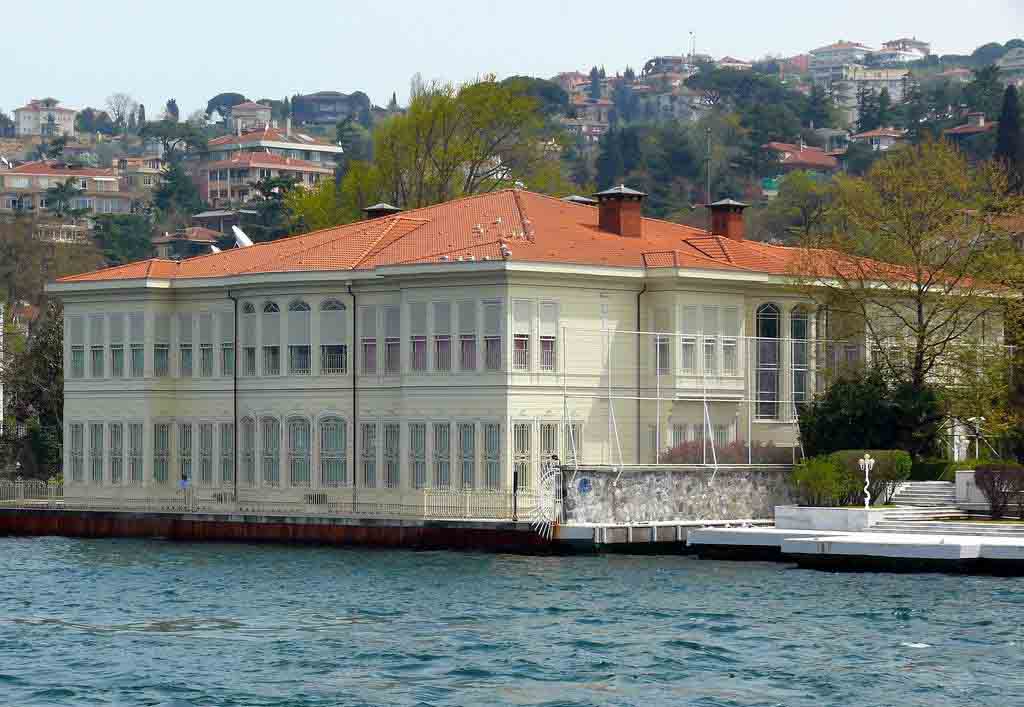 This fine yali was destroyed in a fire during the 1970's. Comprised of harem and selamlik buildings, the section visible today is the rebuilt harem section. 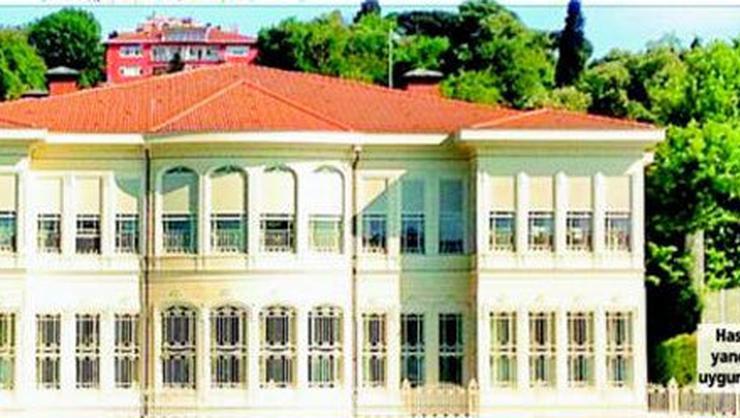 Having commissioned the yali, Hasip Pasha was the son of Mehmed Emin Efendi, who was in charge of foundation revenues during that period. The Pasha's name is first mentioned in records as the secretary of the foundation trustee of the Nusretiye Mosque in Tophane, commissioned by Sultan Mahmud II. Promoted to the rank of Hacegan (General Secretary) after the completion of the mosque, Hasip Efendi became the Secretary General of the National Mint and the Minister of Pious Foundations and was promoted to the rank of marshal during subsequent years. This Pasha, who was a sensitive person, gained a reputation for his wealth and generosity. Having commissioned this yali, the pasha lived here for many years and passed away here in 1870. 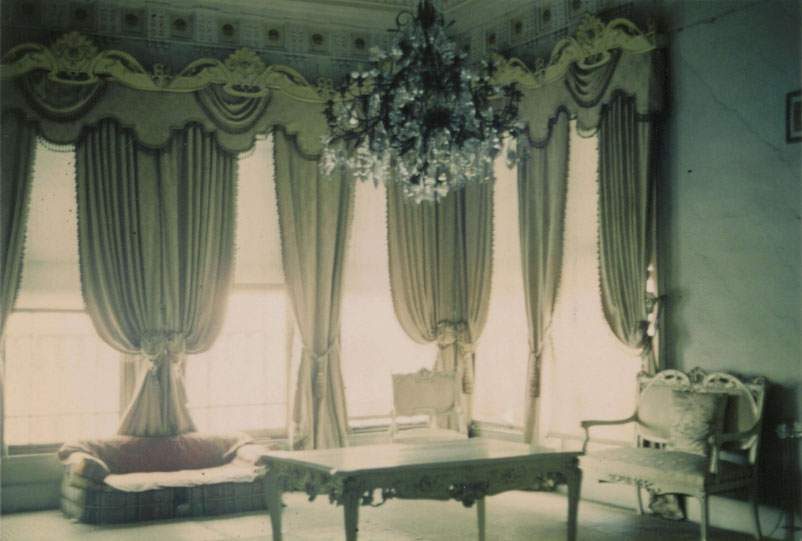 First built as a harem and selamlik during the reign of Sultan Mahmud II, the yali was reduced to ashes before it was furnished. While there are not many details regarding the initial state of the yali, it is known that the structures that burned were twin yaks connected by a passageway. The harem and selamlik sections were rebuilt after the fire. Situated in the north, the selamlik portion was demolished in later years whereas the Mabeynci Faik Bey Yali, which is extant today, was built on the property. The lost selamlik section was quite different than the structure which exists on the premises today. Featuring an 'H'-shaped plan, the single-story selamlik section rose over the sea with a 44-meter facade. The harem is the section of the Hasip Pasha Yali visible today. After fire destroyed the first structure, this section was rebuilt as a two-story; it was reduced to ashes once again as a result of a major blaze in 1972. Years before this fire, the yali underwent a thorough renovation between 1906-16; its flawless structure and architectural features made it one of the most popular yalis of the Bosphorus. The yalis outer facades, which hung over the sea in a manner once known as leb-i derya were kept sedate. The straight corner projections found on the seaside facade and convex overhang found in the middle of the same facade give the yali a tranquil beauty. The large vaulted windows seen in the center motif are replaced with large, rectangular-bodied windows in the side wings. Because the yali rides over the sea with wooden braces at jetty level, there was no sea entrance in the plan. The main entrance is on the east façade overlooking the garden courtyard; two elegant columns in front of this entrance were divided by three large glass cases.

Construct ed in the neo-Baroque style, this wooden Yali has 21 rooms. The venues are arranged around two oval halls on top of each other, in the karniyarik style. While an edge of the small axis of the oval halls overlooks the sea, the other edge overlooks the garden side. The ground and upper floor plan are arranged in the shape of four chambers each that opened into the hall in the center. There were three or four distinct rooms independent of these chambers. A connection with the top floor was provided by upper floor halls accessed via a triple-branched staircase from the side. Another striking element found hi this yali is a hallway exceeding 30 meters in length, something normally seen in palaces. The interior decoration of the yah was every bit as impressive as its exterior. The wall and ceiling decor were comprised of a large oval dome, arches with handles and geometric divisions of different sizes situated in the ceilings.

The ceiling of the lower floor was clad in wood, while that on the upper floor is of the lath and plasterwork style. The gold-leaf framed crystal full-length mirrors embellished the Mi at both ends of the doors that opened into the corner rooms on the lower and upper floors. The interior halls situated in the front of the corner rooms on the upper floor feature Baroque-style marble fountains. Other elements incorporated into the interior decoration of the yali are the Venetian Bohemian chandeliers with halls and gridwork called `Uskudar Trestles'. 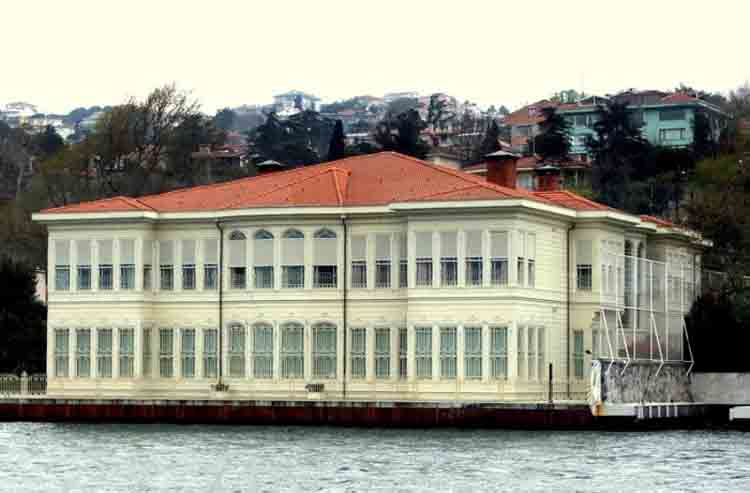 Like many other examples, the Hasip Pasha YALI was comprised of a group of structures set up within a garden that spread over a large area. Besides the Harem and selamlik sections, the yali' structure was comprised of a `Mabeyn' hall as well as a mountain pavilion, situated on the slope of the woods behind the yah, as well as a greenhouse, carriage house, an assistants' office, a kitchen in the outer courtyard, a laundry room as well as the servants' ward. Unfortunately, the yak's enclosed hamam which had a connection with the water of the Bosphorus and a marble pool of great artistic value are no longer extant. As a venue where official meetings were also held during the era of Mahmud H, this fine yali was leased by Mustafa Fazil Pasha, of the Egyptian Khedive Dynasty, for the Young Turks who made frequent visits to the yali during the reign of Sultan AbdulAziz. As one of the oldest and largest waterside mansions with its incomparable architectural features on the Bosphorus, the Hasip Pasha Yali was totally destroyed in the `70's. The structure seen today was restored to the former elegance and dignity of the original edifice.

Several of the them have identical layout characteristics. Most of them have wide, staircases ascending from the lower floor hill to the second floor, which features wide halls, bedrooms, a reception room and library; the ceilings of these are embellished with engravings crafted by master artisans. Priceless carpets laid over Egyptian reeds decorate floors beneath these lavish ceilings. Plenty of large windows were preferred on the facades overlooking the sea and garden, exposing the structures to ample sunlight. The needs of those residing in the yalis would be met by peddlers who sold their wares from caiques. Moreover, other needs of the yalis would be met by house stewards, who plied the waters with caiques that berthed in the boathouses seen in many of the yalis.