Mansions were small-scale structures designed to be exclusively used by sultans on their excursions outside their residential palaces. 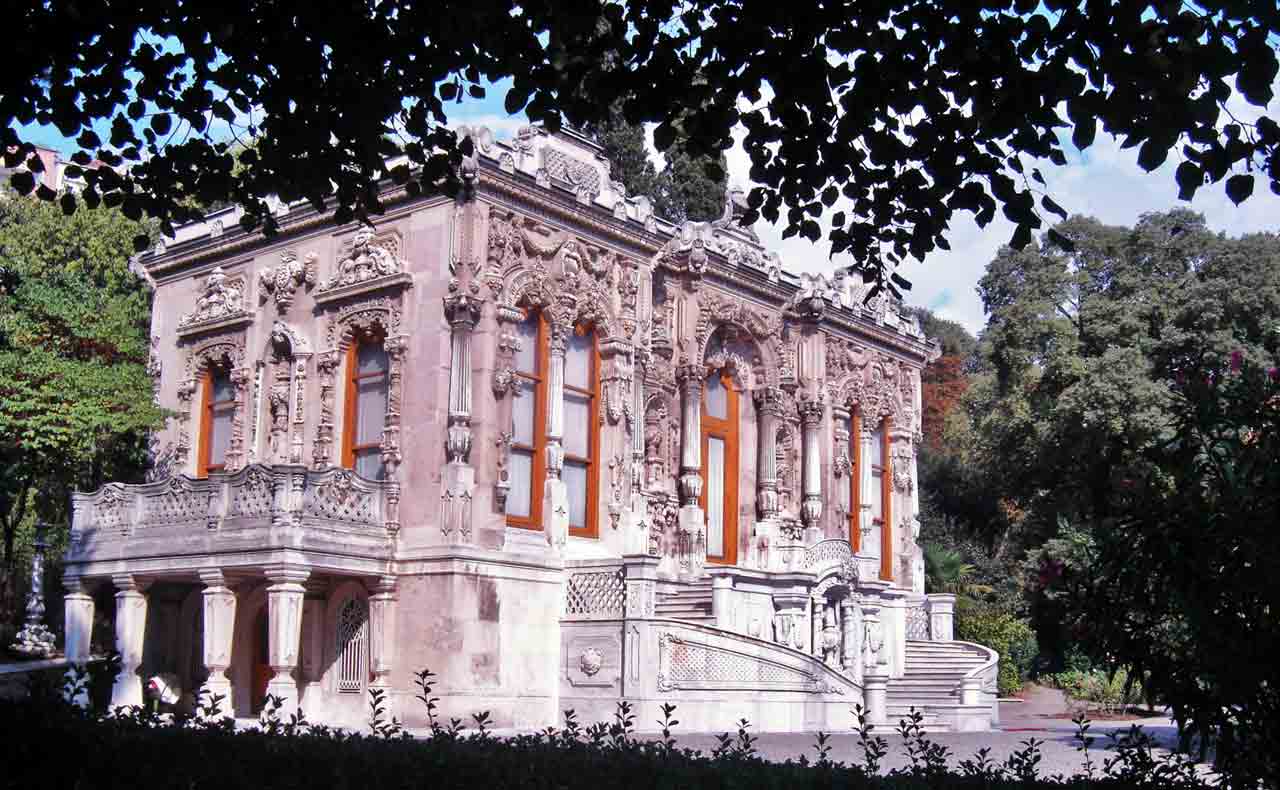 Sultans would sometimes spend a day or two while other times just a few hours at these structures, which were scattered throughout the city according to their needs. Generally constructed in gardens, woods, along shorelines, or promenade areas, these comfortable structures would only be opened during sultanate visits called 'binis' (horseback excursions); they would be kept closed other times under the protection of the groundskeepers. 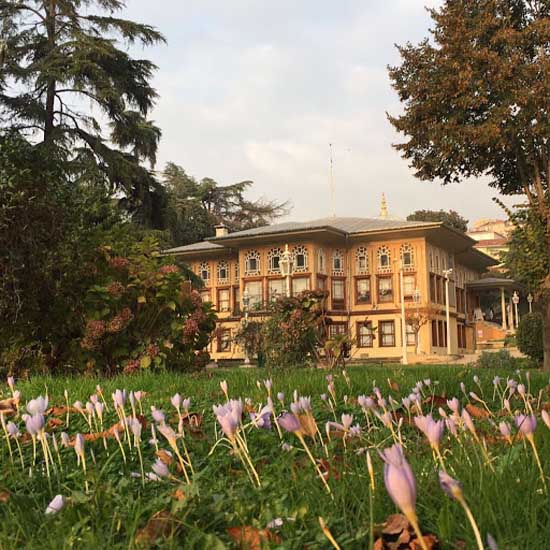 The sultans would have a variety of reasons for conducting their official and unofficial visits outside the palace. In parallel to this diversity, there was also a wide range of functions and sizes of these structures, which were custom-built for themselves. Besides the mansions that were built for the sultan to rest a few hours during his hunting forays, some mansions were constructed as auxiliary structures at some mosques where they would rest after conducting obligatory prayers; some of these were imperial mansions constructed on the banks of reservoirs and basins with imperial chambers reserved for the sultan at military and political institutions for the same purpose. 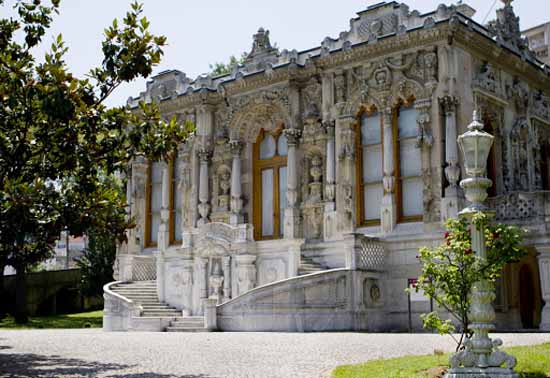 It is possible to see several examples of these structures today. One of the important examples in this regard was Hunkar Mansion, which was constructed next to Yeni Mosque for the sultan to rest after his prayers and was the size of a house with a few rooms, a hall and a toilet. We can see other examples of these auxiliary mosque structures at the Nuruosmaniye, Beylerbeyi and Nusretiye Mosques. The oldest example of a structure allocated for the sultan at military and political buildings is the Mehterhane Mansion. In addition to this mansion, other mansions used by the sultan during these types of visits were Cebeciler, Humbarahane Mansion, Galatasaray Mansion, Buyuk Levend Mansion and Rumeli Kavagi Mansion. Some examples of structures constructed for the sultan near water reservoirs and basins and designed to be utilized for other different visiting purposes are Buyuk Bent and Ciftlik havuzu.

Not much activity was observed in the construction of mansions and pavilions between the reigns of the Conqueror to Murad IV; this type of construction was accelerated during the Mehmed IV era. Mehmed IV, who was very fond of hunting and had an active personality, introduced some pioneering innovations into the making of new mansions. Always in a hurry, this sultan incorporated light materials in the mansions he had built, ensuring they were constructed in little time by utilizing the filling and stacking technique most of the time. While there was not much structural activity seen during the reigns of his successors, Suleyman II, Ahmet II, and Mustafa II due to the chaotic political situation, the reign of Ahmed III, who was creator of the Tulip Era, was the most brilliant era of mansion and pavilion architecture. 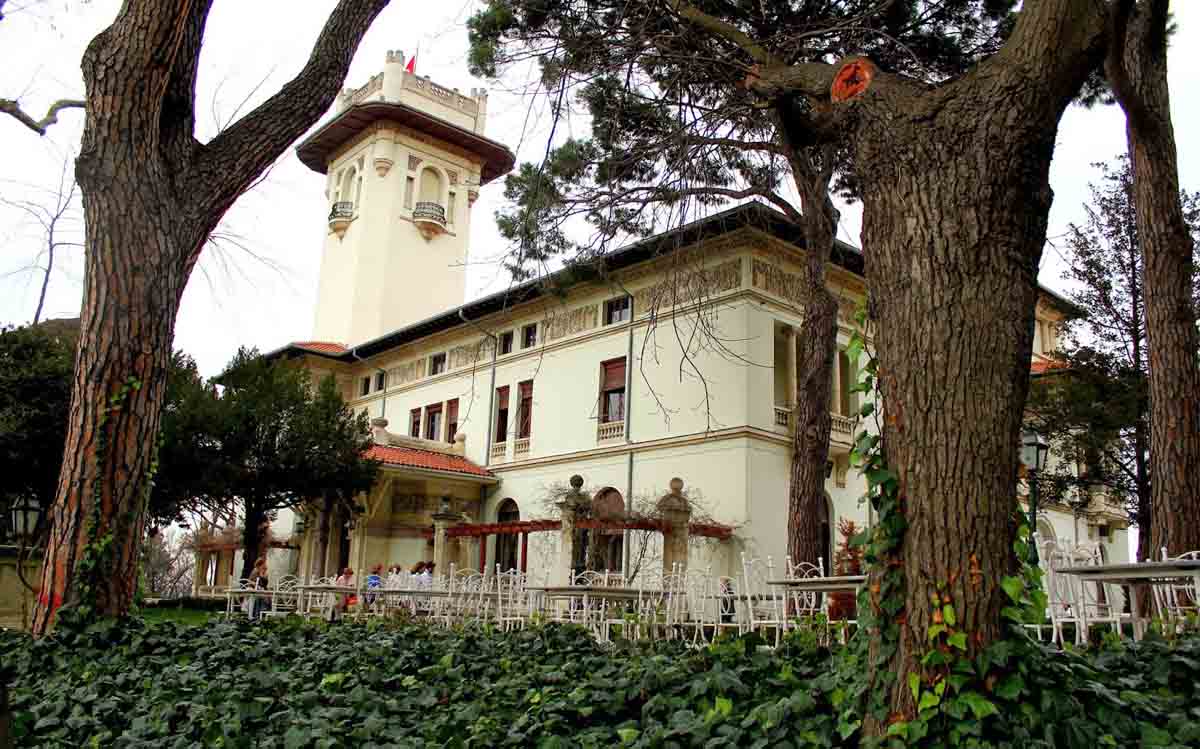 There were twenty daily and seasonal structures which were called 'hadika' outside Topkapi Palace when Sultan Ahmed III ascended to the throne; there were also around 60 mansions and pavilions in the service of the sultan. While renovation work was carried out on these structures which were ruinous, addition buildings were added during this period as well. Thanks to the steadily improving relations with France, 28 Celebi Mehmed Efendi was in Paris in 1720-21 and brought the plans of Versailles Palace and its gardens back to the sultan in Istanbul. With these plans, the sultan decreed the creation of brand new environment for the area surrounding KagIthane, which was known as Sadabad at the time, with gardens with pools as well as mansions.

Occidental influences began to appear in Ottoman architecture from the second half of the 19th century onwards. Described as Turkish" Kalender Mansion was constructed during the 17th century. Situated on the road between Tarabya - Yenikoy, this mansion was one of the popular structures of its day and has managed to remain intact after undergoing several renovations. The columns of the stairwell of Tophane Mansion. Sultan Mahmud II commissioned the palace architect Kirkor Balyan to build this two-story Emperical-style mansion in 1826."

"An exterior view of Tophane Mansion. This two-story mansion is found along the road in the vicinity of Nusretiye Mosque, in the Tophane district."

Rococo during this era, this decorative trend was seen in the mansions and pavilions. It was also during this era when wooden materials were used in ashlar block structures. These changes were apparent in the influences of the engineers and artists who arrived with the objective of technical assistance as a consequence of the blossoming diplomatic relations. Melling was the first architect assigned in the palace circles. While Melling widened the palace at Defterdar Burnu, which belonged to the sister of Selim III, Hatice Sultan with sections planned in the European style, he also constructed a new mansion for the sultan at the Besiktas Palace.

As Sultan Selim III's successor, Sultan Mahmud II was one of the sultans who accelerated the construction of mansions and pavilions, His era saw the beginning of free interior décor, getting away from previously set limitations. The subsequent period saw Mahmud II's son, Abdülmecid vacate Topkapi Palace and reside in the Ciragan. Beylerbeyi and Besiktas palaces. While Dolmabahce Palace was under construction, several fine mansions such as Ihlamur and Kucuksu were built. With the proclamation of the Tanzimat reforms, the effects of the Ottoman Empire's opening towards the West were seen in the arts and on daily life. Succeeding to the throne, Abdulaziz followed his elder brother Abdülmecid. Afraid of fire, the sultan began to have structures built of ashlar block instead of wood. We see an interruption of building construction due to the ever-increasing political situations.

In 1826, Sultan Mahmud II commissioned architect Kirkor Balyan to build the Nusretiye Mansion near its namesake mosque in Tophane. The Emperical and Eclectic style mansion features a rather ornate interior. There is a room on either side of the hall in the middle of the interior. A second hall is accessed through a door facing the entrance to the hall. There is a staircase and service corridor on the left and a room on the right. After the staircase which begins as a single branch, winding upwards as a double branch. There is a small protrusion to the left of the hall on the upper floor with a balconied room to the right. This room opens out to rooms on either side. The seaside and landside facades differ from each other while the side facades are the same. Featuring an outward protrusion, the entry is on the seaside. This protrusion supports a balcony propped up by four buttresses. There are nine semi-circular arched windows on the upper and lower floors of this facade. Consoles prop up the protrusion forming the reception hall on the facade overlooking the road. Set amidst flanking concrete harbor buildings, the green-painted mansion is reminiscent of Istanbul's former elegance.

Another urban mansion is the Balmumcu Mansion, which is used as the management building of the Zincirlikuyu Construction Vocational High-school. Located at the end of Barbaros Bulvari, where the roads leading to Mecidiyekoy and Levent meet, the mansion was commissioned by Sultan Abdulhamid for his brother Yusuf Izzeddin between 1876-80. A familiar face of the era, the architect Sarkis Balyan constructed this mansion as three structures comprised as a harem, selamlik and service buildings. Consisting of four floors including a basement and attic floor, the entry to the selamlik section is towards the east. The entrance is connected to the central hall via a set of marble steps. There are rooms on either side of the hall. With an identical plan as the lower floor, the upper floor is accessed via a staircase. The mansion has a staid exterior and a rather lavish interior. 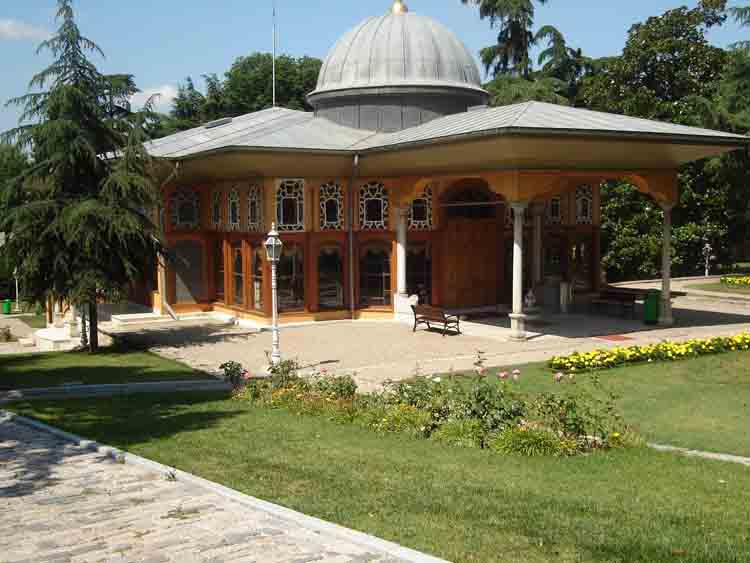 The Ayazaga Mansions are situated in a vast wooded area on the way from Maslak to the village of Ayazaga. Sultan Mahmud II first had a mansion built on this land, which is known as Haznedar Ciftligi. Sultan Abdülaziz had this structure torn down whereupon he commissioned Sarkis Bey and his brother Agop Balyan to build the existing Kasr in 1866. Comprised of four floors including a basement and attic floors, this mansion measures 21.50x20.50 m. Built from stone and marble, the roof portion of this structure was made of brick for decorative purposes. The mansion's two entrances, one to the east and one to the west, are reached by ascending marble stairways. There are rooms in the four corners of a long hall in the middle of this staid-planned structure. The center sections of the corners and side facades of the corners of the mansion's entry facades were constructed to overhang outside. As one of the plainest structures of its period, the interior is adorned with tiles that Sultan Abdülaziz had shipped from England; the embellishments found over the staircases and in the ceilings are also quite stunning.

The second mansion situated in the Ayaz aga woods was constructed from timber and has a large pool in front. This mansion is presumed to date back to the era of Sultan Mahmud II. The wooden mansion is comprised of a living room measuring 10.00x16.00 m and two rooms situated behind the living room. Two fountains, one of which is quite small, were placed in the back of the living room, which is ornated with wall engravings of the period. These mansions are currently found on premises under military control.

Another mansion that was popular during its time was the Kalender Mansion, which is located on the Tarabya-Yenikoy road. Deriving its name from its location, this mansion was constructed in the 17h century and has managed to remain intact thanks to a number of restorations carried out over the years. Selim III renovated Kalender Mansion in 1794 and used it as his horseback excursion mansion. The Kalender Mansion maintained its popularity during the reign of Mahmud II. The Holy Banner was brought here during the war with Russia in 1828-29. The mansion was renovated during Sultan Abdul-Aziz's reign. The structure's plan is comprised of a large hall at the entrance and a room to its left and right. Visitors can go upstairs via the staircase directly opposite the entry door. The plan of the upper floor is a repeat of the lower floor. The mansion remained in a state of disrepair for many years after it was heavily damaged in a fire which occurred in 1939; it was renovated to its original condition in 1967.

One of the finest examples on Asian side is found in Kosuyolu, Uskudar, the Adile Sultan Mansion is situated on the premises of the Validebag Health Care Facilities of the Ministry of National Education. A hunting! lodge built by Sultan Abdülaziz is situated in the vast garden of the mansion which Sultan Abdülmecid commissioned Nikogos Balyan to construct for his sister Adile Sultan in the year 1853. The plan of the rectangular-shaped mansion is also symmetric on two sides. The entrance is reached via a double-branch marble stairway. There are large living rooms on the first and second floors of the mansion, which were widened with side spaces resembling semi-courtyards on four sides. There are four small rooms as well as a large room in every corner. The first-floor plan is repeated on the second floor and the central hall runs the width of the structure from end-to-end. An ovular-shaped floor in the center was achieved by rounding off the corners. A ceiling in the shape of a squat wooden dome is over this. The mansion has triple-split side facades as well as identical front and rear facades. Allocated to the Ministry of National Education after the abrogation of the dynasty, the mansion was first utilized as an orphanage, then as a children's tuberculosis ward in 1927. It is currently operated as a teachers' rest facility.

"Adile Sultan Mansion is located in Kosuyolu/Uskudar. Sultan Abdülmecid commissioned the construction of this mansion for his sister Adile Sultan in 1853."