Suleyman the Magnificent's daughter, Mihrimah Sultan, had this mosque built across from the Uskiidar boat landing in 1547. Its cubical simplicity and symmetry attract the eye.

THE MOSQUE OF MIHRIMAH SULTAN

It is built on a terraced hillside with a commanding view. In front of the interior court is a double-faced fountain made of marble with 20 faucets. In the center of the latticework of the fountain are little six-rayed stars. Above the marble lattice is a belt of embossed lilies. There are two minarets with single balconies made of wonderful hewn stone on the left and right of the mosque, the doors opening into the interior court. The leaves of the doors and windows are decorated in mother-of-pearl, ivory, awl ebony. 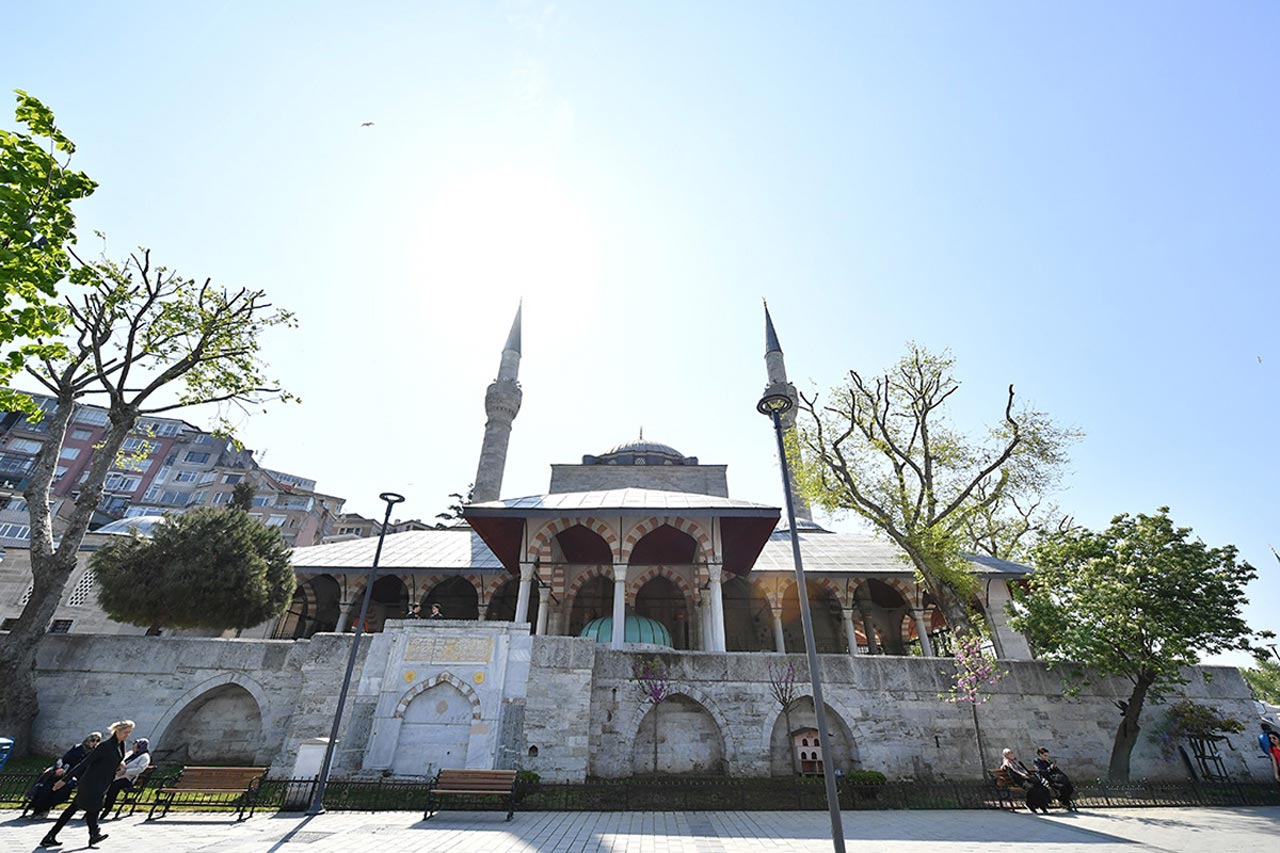 The sermon pulpit is a pretty example of Turkish inlay art. The words "Kelime-i Tevhid" are written in ivory on the leaves of the door. Mimar Sinan applied a more modern version of the St Sophia for this mosque.The usual half-dome above the mosque entrance was not used here. Therefore, when you enter the mosque, you are under the main dome. The fountain at the entrance is very beautiful. The raised decorations on the wood of the window leaves and the pulpit and on the marble of the mihrab and minber are delicately worked. The madrasah, which has endured to our present time, is located to the north of the mosque. The interior of the medressa was ruined by inner interference. 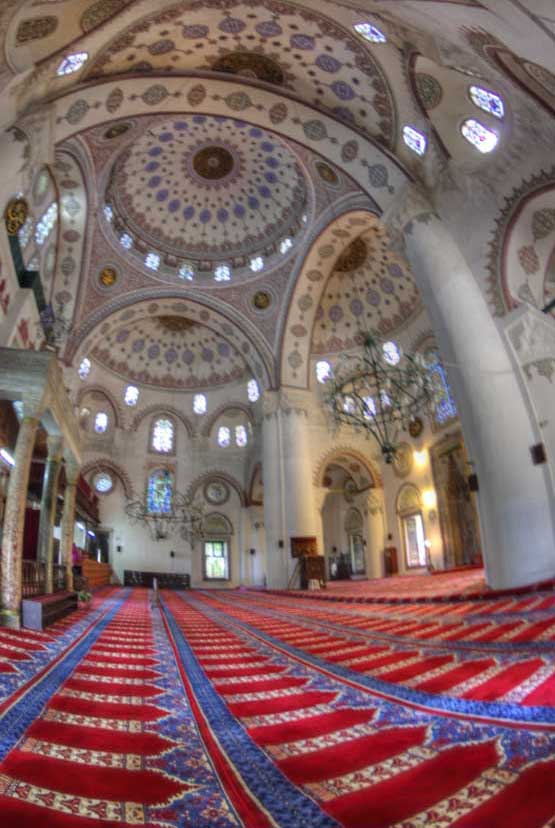 The building is now used as a health center. There are two tombs between the mosque and the madrasah. One tomb is of the two sons of Mihrimah, the other of the Grand Vizier Ibrahim Ethem Pasha. The elementary school is in the qible direction. The hostel, the soup kitchen and the caravansaray do not exist today The most beautiful upright clock in Istanbul is in Uskudar 's Mihrimah Mosque. With pictures sketched in marble, it is attached to the wall with iron claw feet. In the lower right corner it is identified as having been made in 1770 by Dervish Yahya Muhittin for use by the new Central Mosque.

In the upper part of the clock face is the heading: "Eser-I Saitzade Mehmet Arif Elmenur bi Hizmetul Evlat." This clock was located in the Beylerbeyi Mosque "Muvakkithane" (the place where the time for the call to prayer is determined); later it was moved to the wall of the "Boat-landing Mosque", as Mihrimah Mosque is sometimes called. 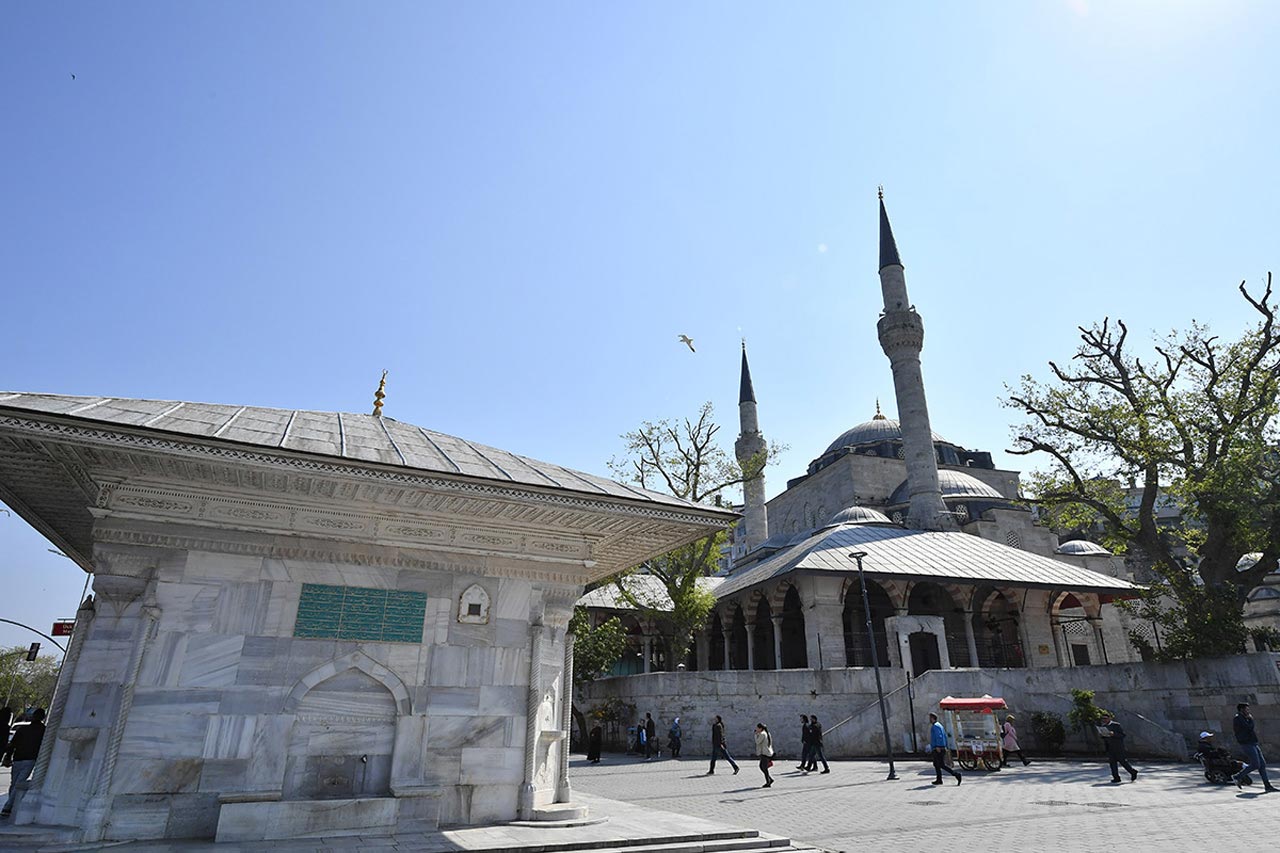