Less important mosques abound especially those built by vezir's and the daughters of sultans in the 15th century. Of these the most important is close to the hospital. 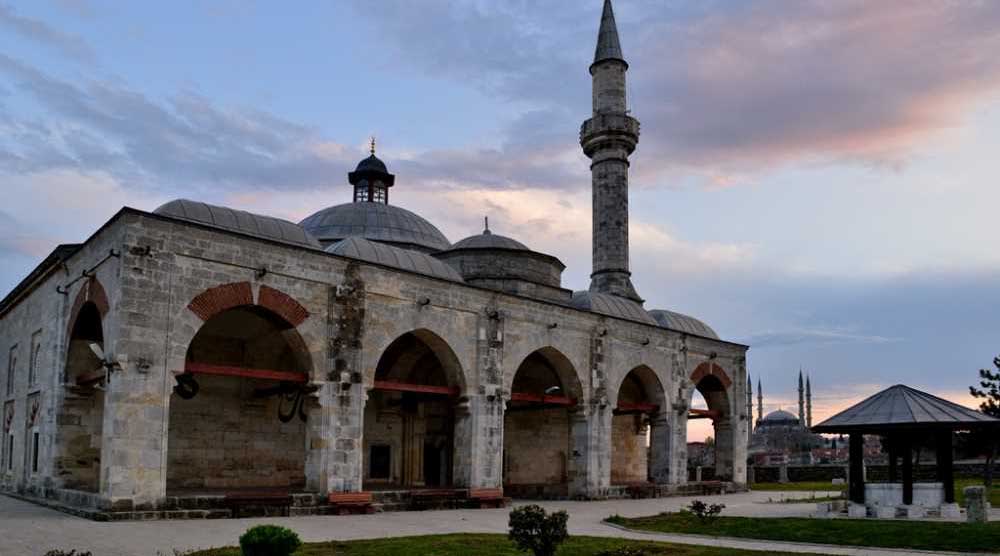 It is attributed to Yildirim Beyazid but Dr Abdullah Kuran has cogently argued that it was in fact founded by his father, Murad I. Murad was known as the Hildavendigar (Royal) and it is by this name that his important mosque at Bursa is known. The Yildirim mosque resembles the lower floor of this mosque-zaviye, or convent mosque frequented by dervishes. There is a central domed court with four bays off it made up of the vestibule, mosque and dervish rooms. It was built on the site of a cross-form church and this has led to misleading speculation. 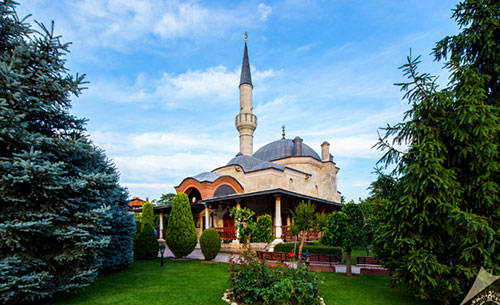 Stripped of its tiles by the Russians, the building has been much restored although the essential form remains. It now has twin minarets added at a later date. Its interest is that is likely to have been the finest masonry mosque built in Edirne after the Ottoman conquest in 1361. One church at least was converted to Moslem use but, as Kuran points out, it is incredible that no new mosque was built by the sultan for a whole generation when the town was of such importance. Apart from commonsense there are details in the structure which relate to the period before Yildirim. It is likely that this mosque was built after 1361 but some time before 1390 and is misattributed.

The situation is now agreeably rural but the city, stretched beyond the river and the mosque, consequently suffered from flooding. The mosque of the Gazi, or Hero, Mihal belongs to the same style and his bridge leads to the compact structure of the Safi Melek mosque. The bridge was originally Byzantine if not Roman. Mihal (Michael), a convert to Islam, repaired it. Later repairs have given it its Ottoman appearance. The next, Meric bridge is an ideal spot from which to admire the wooded banks and imagine the picnics in the past. Other mosques include typical square, porticoed examples of the period such as the Ku* Dogan Cami of 1427, the Seljuk Hatun Cami of 1456 and the Kasim Pasha Cami of 1478. This with its 12 m wide dome on a square base brings us back to the normal proportions of the buildings of the century so much revolutionized by the 24 m dome of Uc Serefeli Cami. 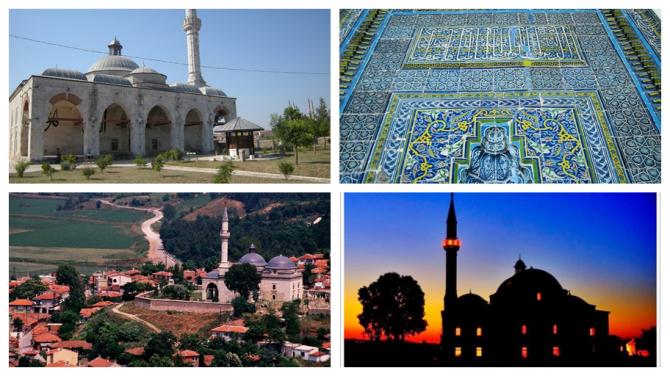 Note the fallen portico of the mosque of Sittiph Hatun, a princess remembered in an idyllic spot. A daughter of the Dulkadir family which gave several brides to early Ottoman princes, she was the first legal wife of Mehmed II but was soon discarded and pensioned off a few years after the marriage in 1449. They had no children and Mehmed was already living happily with Gulbahar who as the mother of Beyazid II was to be a redoubtable Valide Sultan (Queen Mother). The mosque, which has a dome 13.13 m in diameter, was built for her by her stepson Beyazid. She must have had loveable qualities to be honoured by a stepson many years after he had grown to be a man and as soon as he became sultan. There is no mention of Mehmed II on the inscription over the door. The portico fell during an earthquake and reveals clearly how the Ottoman teams built in sections - one at work on the square mosque, one on the portico and one on the minaret which here survived the shock. In 1486 Aye Kadin, daughter of Mehmed I, built a mosque in a south-eastern quarter of the city.

It is unlike any of the others although a square domed hall because it is unusually lofty. The quarter-domes or squinches that help support a dome riding on an octagonal drum are a prominent external feature. A Byzantine-type frieze runs round the second tier to windows and above this on the four sides of the drum are sets of three narrow windows, again in the Byzantine manner. The portico has gone but the handsome door remains although not on the mihrab axis. It is probable that the architect was a local Christian untrained in the Ottoman tradition. The fine minaret, however, must certainly have been built by the usual, experienced team. These teams went from mosque to mosque, and more than any other groups of masons carried the tradition from region to region.