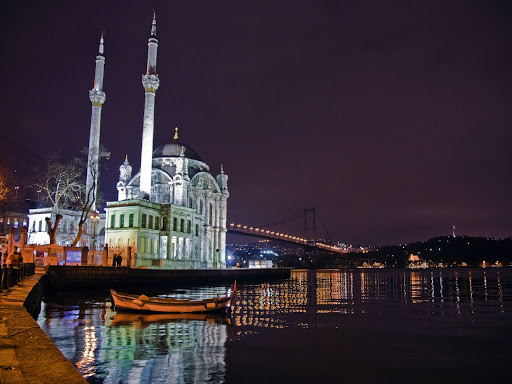 
Also known as the Great Mecidiye Mosque, the building is located at the northern end of Ortaköy Pier Square. There was a mosque built by Mahmud Ağa, the son-in-law of Vizier İbrâhim Pasha in 1133 (1721) in the place where the mosque was located before. This structure was probably renovated in the 1740s by Mahmud Agha's son-in-law, Kethüdâ Devâtdâr Mehmed Ağa. In the Hadîkatü'l-cevâmi‘, it is stated that the building commissioned by the Kethüdâ was "built in the sea with a minaret with a balcony and a mahfel-i hümâyun and all its levâzımat". Today's building was built by Sultan Abdülmecid in 1270 (1854) according to the inscription written by Zîver Pasha on the entrance gate.

The mosque, whose architect was Nikogos Balyan, XIX. It consists of the harim section and the sultan's pavilion located in front of the entrance, as in the mosques of the 19th century. With the exception of the sultan's entrance to the west, the composition of both parts is symmetrical with respect to the north-south axis. On the east and west facades, where two separate sections are located, the sanctuary and sultan sections are equal in size. Harim is about 12.25 m on one side. It is a square room in length and is covered with a dome with a deaf rim that is provided with pendentives. Other sections to the north are covered with vaults. The last congregation place is a rectangular entrance hall with a rectangular plan, and three openings with a door in the middle and a window on the sides pass under the gallery and from there to the harem. The building has wide and high windows. There are three windows with large round arches in two rows on the other three facades of the harim outside the entrance hall. Of these, the lower middle window of the qibla facade is deaf and the mihrab is placed here. The stepped marble mihrab niche is in the style of empire. The corner fillings are decorated with intricate plant motifs in relief and the border with relief geometric motifs. The marble pulpit is decorated with pink colored stones. It is decorated with geometric motifs on its railings and baroque folds on the sides. The elegant sermon bench on the left is made of marble and somak. The interior walls of the mosque are decorated with red and white moire pink imitation plaster. The “çehâryâr-ı eminîn” plates hung on the walls and the word-i tawhid on the pulpit were written by Sultan Abdülmecid, and the others were written by Ali Haydar Bey. Landscape and architectural arrangements draw attention to the pen-works in the pendants and the dome. 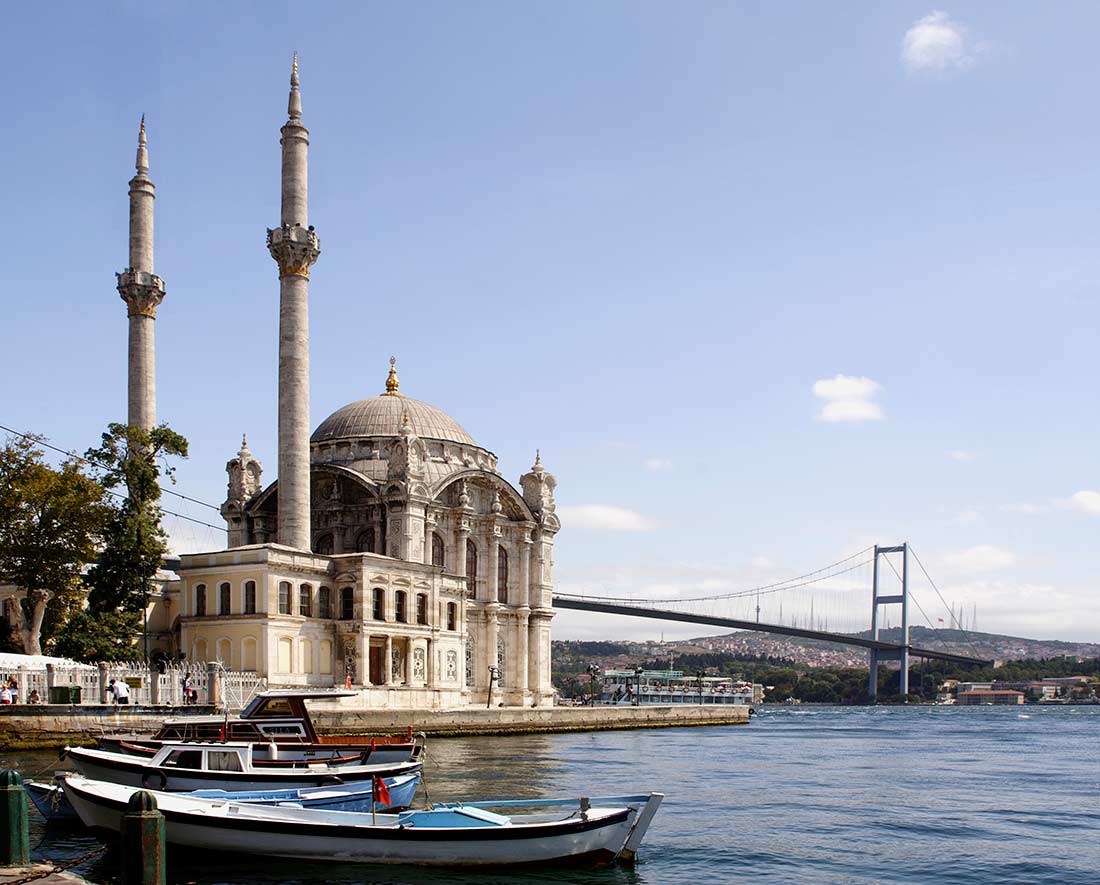 The two-storey sultan's pavilion, which consists of the east and west wings connected by the entrance hall and the hall above it, is reached by the stairs that curl from both sides on the northwest corner. The east and west wings come forward and formed a small courtyard at the entrance. The sultan's entrance is on the west side of the entrance hall and it is a three-span section that can be accessed by stairs with ten steps on both sides. The western wing of the second floor, which can be climbed by an ostentatious, double-armed, elliptical staircase, was arranged as a sultan's circle. The east and west wings, where there are three interlocking spaces, are symmetrical except for a few minor differences. The staircase connecting the floors in the east wing is located in the south. 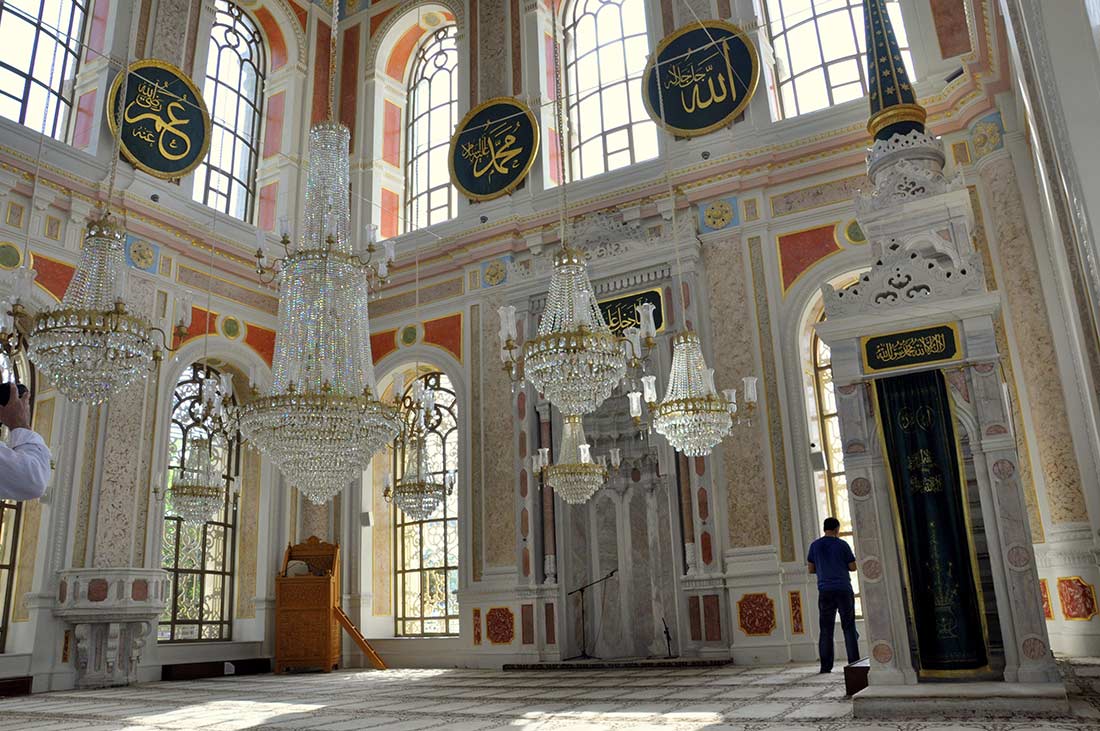 In the building, there is a difference between the harim and the sultan's pavilion in terms of the design and handling of the surfaces. Despite the richness of the decoration in the harim, the facades in the sultan's pavilion are kept very simple. The decoration elements here are moldings around the windows with flattened arches and triangular or circular pediments on the windows of the sultan's circle halls. The exterior of the mosque draws attention with its baroque and rococo style stone, carved and relief ornaments. Approximately 2 m. The ground floor and the gallery are separated by moldings. The extensions of these moldings also form the eaves cornices of the sultan's pavilion. All three openings in the body walls are arranged concave. At the outer points of the openings, there are four false columns, one fourth of which are embedded in the wall, four on each facade. All of the columns are grooved on the gallery floor and the upper half on the ground floor. Columns end with composite column heads on the gallery floor, and the two columns in the middle are well emphasized with additional trays and hillocks. 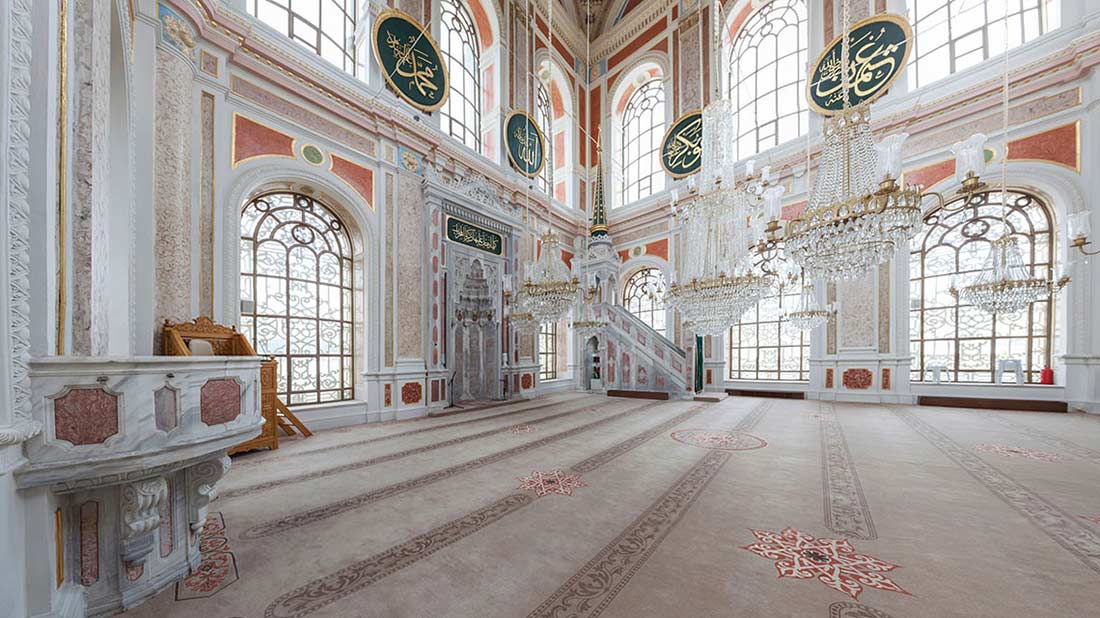 The bases of the thin-bodied minarets are on both sides of the staircase and are inside the masses that make up the pavilion. Under the cheers, there are consoles formed by volutes that bend in reverse. The acanth leaves between the bottom are painted with gold gilding. The structure, which is statically fragile, was repaired in 1862 and 1866, and when it suffered great damage in the 1894 earthquake, it was repaired by the Ministry of Foundations in 1909. The old grooved minarets that were demolished in this repair were made without grooves, and the honeycomb and cone parts of the minarets and various parts of the building were renewed. In the restoration works initiated by the General Directorate of Foundations due to re-cracking in the building in the 1960s, the ground was reinforced and the dome was renewed. The mosque, which was closed to worship in this restoration, was reopened in 1969. The building, which was partially destroyed as a result of a big fire in 1984, was restored again. Although its original parts have changed greatly over time, Ortaköy Mosque is one of the important and valuable architectural works of the Bosphorus.