One of oldest Bosphorus yalis is the Sadullah Pasha Yali in Cengelkoy. Comprised of two sections, the harem and selamlik, the latter was demolished during the early-20t" century, whereas the harem section is still intact. 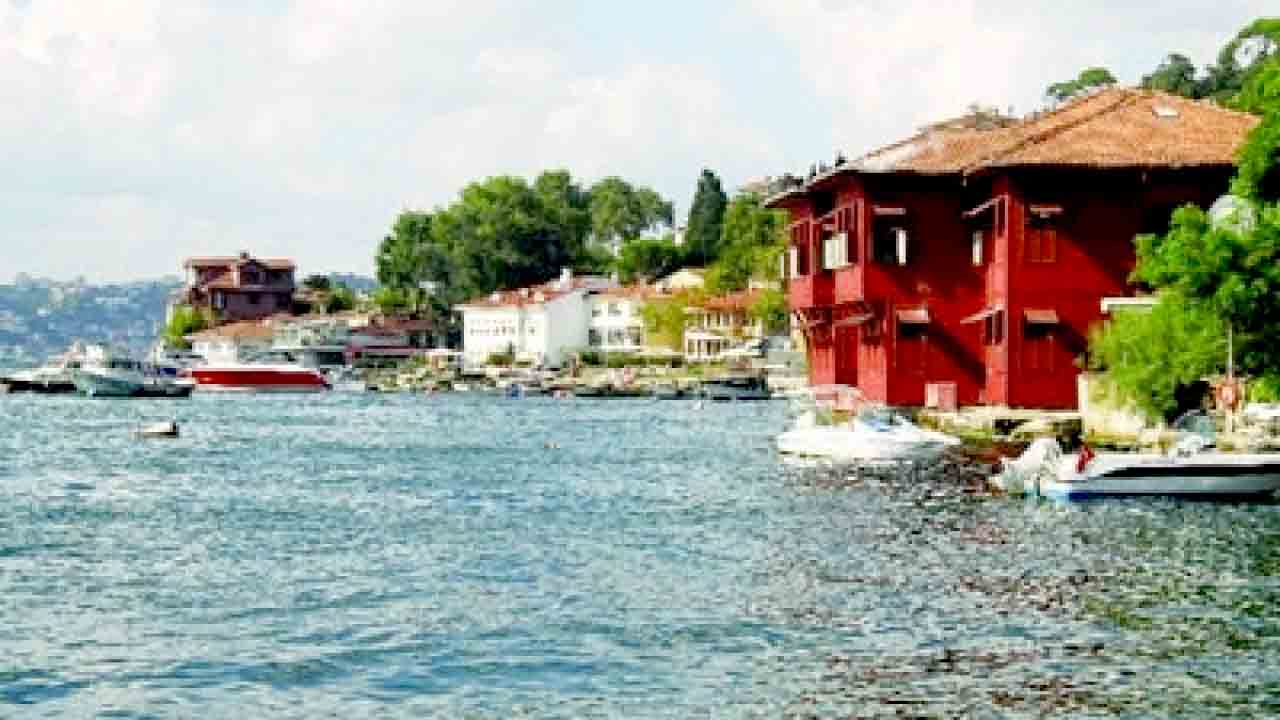 Though it is known as the Sadullah Pasha Yali, it predates this pasha, as it was built around 1770. According to the Registry of the Commanding Officer of the Sultan's bodyguards, Sultan AbdulHamid I granted the yali to Chief Harem Eunuch Mehmed Ma in 1791. Later on, Mehmed Aga sold the yah to Koca Yusuf Pasha; it remained in the hands of Yusuf Pasha's family for a long period. Sultan Selim III dismissed Grand Vizier Yusuf Pasha, who passed away shortly afterward in 1805. The Registry of the Commanding Officer of the Sultan's bodyguards of this period indicates that the yali was the property of Yusuf Pasha's wife, Hanife Hatun Later on, Hanife Hatun's daughter Emine Hatun, who married the Grand Admiral Seydi Ali Pasha, lived in the yah; after the death of Ali Pasha, his son Hamdi Pasha along with his mother continued to live here. 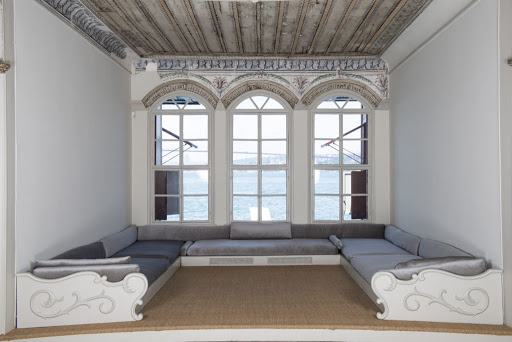 During the subsequent years, Hamdi Pasha, who married Fatma Rehna, could not manage his huge fortune properly and became highly indebted to a gold dealer. He was obliged to sell the yali as he couldn't repay his debt. The yali was acquired in 1851 by Esat Muhlis Pasha whereas this fine Bosphorus yah was transferred to another important Ottoman family. The statesman and poet, Esat Muhlis Pasha, was also the father of Sadullah Pasha, whom the yali is named after. Born in Erzurum in 1838, Sadullah Pasha eventually took on state duties and quickly overshadowed his father, who was a middle-level official. Trained in the famous Translation Room, the pasha was appointed to important positions such as Education Consultancy. When Sultan Murad V was enthroned, he summoned Sadullah Pasha to the palace sending him the imperial calque. A literary person, the pasha wrote in his memoirs that while he was at his yali in Cengelkoy, he heard a cannon salute heralding the news that Murad V had ascended to the throne in 1876. 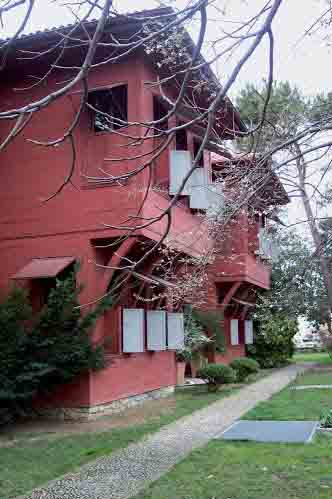 He added that the sultan sent him a calque which whisked him to Dolmabahce Palace. Appointed as Palace Secretary General, the pasha's accelerated rise that began with Murad V was to come to a screeching halt when the sultan was dethroned and succeeded by AbdulHamid five months later. The new emperor, AbdulHamid didn't want Sadullah Pasha as part of his entourage, considering him one of his elder brother's men. The pasha was dispatched to Filipe, Bulgaria to investigate a matter; then he was appointed the post of Ambassador to Berlin in 1877. Upon his return to Istanbul, the pasha was constantly hindered with tasks he was assigned, whereas he was dispatched as the Ottoman Ambassador to Vienna in 1883. As a consequence of deliberately being kept away from Istanbul for so long, Sadullah Pasha, who was also a poet, suffered a nervous breakdown as a result of a secret love affair; he committed suicide by leaving the gas vents on at the Vienna Embassy in 1892. Unable to believe he was never coming back, his wife, Necibe Hamm, continued to keep the house spotless and waited for his return clad in a pink tulle dress he loved. She was still wearing it when she too died in 1917, at the age of 80. After her passing, the house passed to a distant relative, Ferit Tek, whose daughter, Doctor Emel Esin married an Egyptian prince and set up a foundation to preserve the residence. The small-scale yah was built as a two-story structure. It is reminiscent of traditional Turkish houses with a central hall and rooms connected to the hall with a second floor protrusion supported by wooden braces. The interior of the harem, which is the surviving section of the yali, is in Baroque-style. Featuring a large, squat-domed, oval-shaped hall in the center, the upper floor is wider with protrusions leaning against buttresses; the hall on the lower floor is octagonal-shaped.

While the ceiling of the lower hall was once bolstered with wooden beams, these eventually rotted and were replaced with marble. The lengths of the halls run parallel with the sea. There are eight rooms of the same arrangement positioned in the corners of the halls in the yak's floor plan. The corner rooms are painted in colors befitting the view seen from the windows on each floor. Painted green, yellow, pink and blue, these rooms feature distinctive decor. As for the decorations, the wall paintings as well as fruit-and-branch bouquets and sun-splash compositions generally seen in the ceiling hubs with ribbons and stripe lines are striking. Painted by Europeans artists firsts they complied with Islamic tradition by Hi)! depicting living entities. 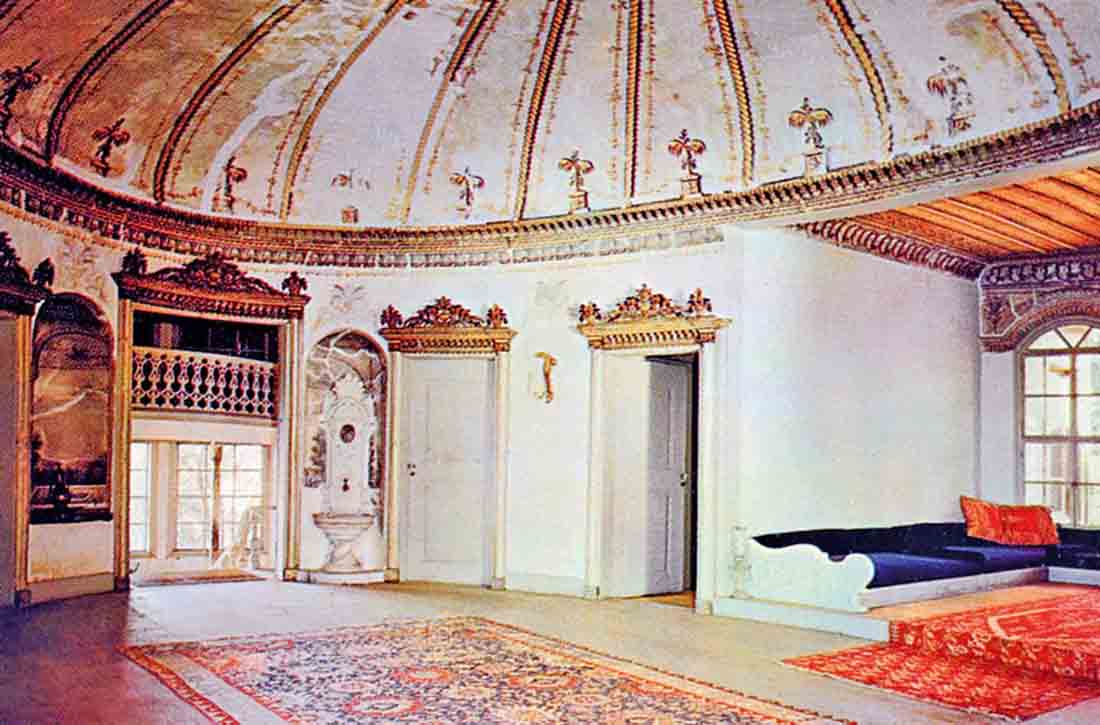 but rather cutaways of the Bosphorus, Topkapi Palace as well as the Serefabad Palace in Salacak. The last owner, the late-Emel Esin kept these notes regarding the interior fixtures; the rooms overlooking the sea on the lower floor are embellished with coral- and black-engraving over a bluish-lead background. One of the room's main themes features floral depictions. The wooden parts found in the southeast of the lower floor rooms overlooking the woods are yellowish-green. Nothing remains of the wall color. The wood of the lower-floor room to the northwest was light pink and the walls were leaden. One accesses the north and south doors of the upper hall upon reaching the top of the double staircase. Three of the Istanbul scenes in the large cells on the upper floor are relatively preserved. The views are of the European trompe-1' oeil style; it is as if there is a curtain and the strip in the foreground is seen from behind. Topkapi Palace can be seen in the center cell of the northeast room on the upper floor. The final section of the Golden Horn is seen in the center cell of the northeast room upstairs and the Bahariye district on the western shore is seen as well. The Sadabad Mansion is seen in the large cell of the southwest room upstairs. One goes out from the hall to the yali's quay via a partial courtyard opening out to the sea. There was once a kitchen with a large stove on the northeast facade of the yali. The structure's north door opened out to the selamlik side, which no longer exists. There was a fountain built by Sadullah Pasha on the outer wall of the garden which brought water from a nearby source. There was also a two-story wooden boathouse where the yak's caiques were kept on the north side, just beyond the selamlik. The entire seaside façade of the yah was renovated to resemble the south façade during the most recent renovation work. This elderly yali of the Bosphorus commemorates the halcyon days of mingling on this magical waterway. 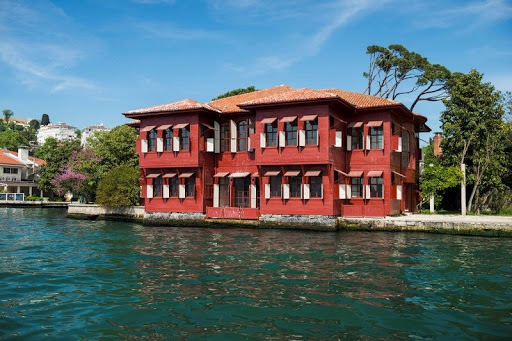 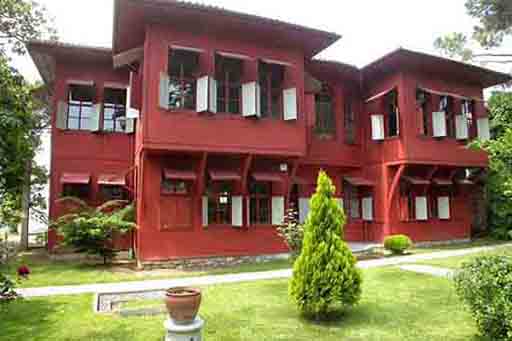 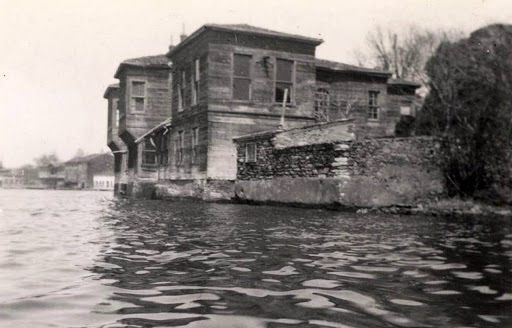