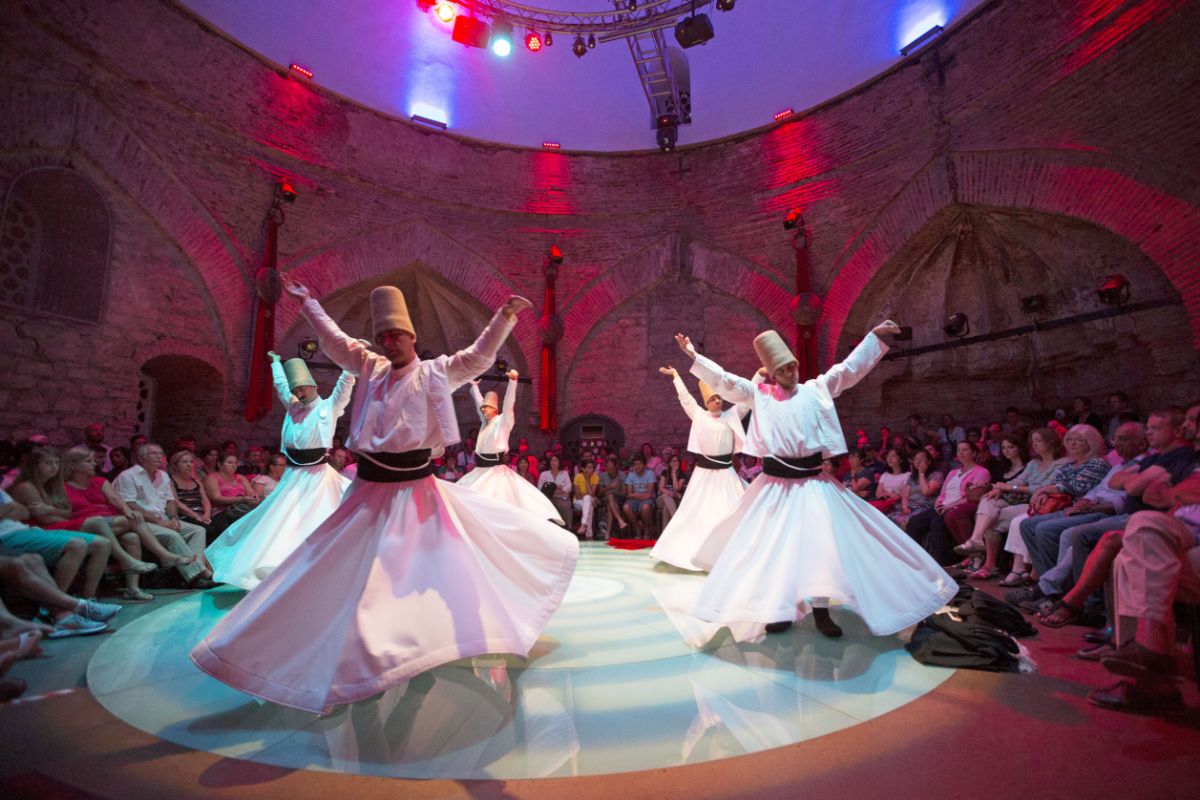 Go on a spiritual journey and watch the mystical ritual of the Mevlevi Order in a historical venue, The House of Hamamizade Ismail Dede Efendi (One of Ottoman music's greatest composers). The Sema ceremony is a journey through man's spiritual ascent to perfection through mind and love, do not miss this experience of music and motion!

The Experience of the Whirling Dervishes Ceremony

The Performance of the Whirling Dervishes The programme starts with an introduction about Rumi, followed by Sufi Music and the 4-salam "sema ceremony", giving life to 800 years tradition on the stage with their determination and faith for being a lifelong follower of Mevlevi tradition.

The dance troupe represents one branch of the Sufi tradition of Islam that focuses on love, tolerance and the worship of God.

Wearing long, flowing robes and tall hats, the Whirling Dervishes twirl to live music played on ancient instruments, a form of worship said to bring them closer to God.

The venue has limited seat capacity and prior reservations are recommended.

The mystical dance of the Whirling Dervishes is called Sema. The Dervishes follow the teachings of Mevlana C. Rumi, a XIII. Century Islamic mystic. Sema is a praying and reflects elements of Turkish history, beliefs and culture. Sema shows a mystical journey of spiritual ascent through mind and love to "Perfect".

Deserting his ego, the dancer turns towards truth and into "Perfect". He then returns from this spiritual journey as a mature person, filled with love and to be of service to all creatures and to the whole of creation, without discrimination of belief, race, class or nationality.

Known to the west as Whirling Dervishes, the members of the Mevlevi Order (named for their founder Mevlana) from Konya lived in what we might call coisters or monasteries - what to them was a Mevlevihane. The one at Galata in Istanbul is a product of late Ottoman architecture , and quite elaborate in having a tomb, a large chamber for the ceremony of the whirling dance (Sema), a fountain from which water was charitably distributed to the public, a time keeper's room, cells for the dervishes, separate quarters for the Master, a section for women, a chamber of silence, a large ornate fountain for ablutions, and a laundry room.

The Mevlevi Order founded by Mevlana in Konya during the Seljuk period is made up first and foremost of tekke analogous to the monasteries of the West. The first of these tekkes is named for Mevlana and was considered as the originator of all the rest. One figure stands out in the early spread of the order: Divani Mehmet Celebi. The celebis or gentle ones who went out to break new ground and make converts saw themselves as disciples of this great master, and an astonishing number of tekkes were established during Divani Mehmet Celebi's lifetime and thanks to his efforts; in Aleppo, Egypt and Algeria, on the islands of Chios (Sakiz) and Mitilene, and of course on the Turkish mainland. The Galata Mevlevihane is among these latter.

The rituals of the Rumi's followers (Whirling Dervishes) are among the enduring as well as the most exquisite ceremonies of spirituality. The ritual whirling of the dervishes is an act of love and a drama of faith. It possesses a highly structured form within which the gentle turns become increasingly dynamic as the individual dervishes strive to achieve a state of trans. The music that accompanies the whirling from beginning to end ranges from somber to rhapsodical; its effect is intended to be mesmerizing. Chanting of poetry, rhythmic rotation, and incessant music create a synthesis which, according to the faithful, induces a feeling of soaring, of ecstasy, of mystical flight.

The Mevlevi sect belongs to the Sunni or orthodox mainstream of Islam. Its doctrine never developed a revolutionary strategy - and although it was occasionally criticized for its heretical ideas, it always enjoyed the respect of the officialdom.

Many later Ottoman Sultans, including Mehmed, the Conqueror of Istanbul, were enamored of Mevlevi ideals. The reformist Sultan Selim III was virtually a member. Suleyman, probably the greatest of the Sultans, held the Mevlevi dervishes in high esteem and their semahane (whirling hall) constructed for them as his imperial gift. The hall/mosque stands next to Rumi's mausoleum in Konya.

The Whirling Dervishes played a vitally important part in the evolution of Ottoman high culture. From the 14th to the 20th century , their impact on classical poetry, calligraphy, and the visual arts was profound, while music was perhaps their greatest achievement. Since the dogmatists of Islam's orthodoxy opposed music as being harmful to the listener and detrimental to religious life, no sacred music or mosque music evolved except for the Mevlud, a poem in praise of the Prophet Muhammed, chanted on high occasions or as a requiem. Rumi and his followers integrated music into their rituals as an article of faith. In his verses, Rumi emphasized that music uplifts our spirit to realms above, and we hear the tunes of the Gates of Paradise. The meeting places of the dervishes, consequently, became academies of art, music, and dance. Today, the performances of The Whirling Dervishes includes twelve musicians (on traditional Turkish instruments) and 12 dancers. There is also a master of ceremony. A performance is broken into two parts with the introduction conducted by the master followed by 3 or 4 pieces of music. This is followed by a 4-part whirling ceremony.

The Ritual of Sema

Whirling Dervishes - The fundamental condition of our existence is to revolve. There is no object, no being which does not revolve. The shared similarity between all created things is the revolution of the electrons, protons, and neutrons within the atoms that constitute their basic structure. From the smallest cell to the planets and the farthest stars, everything takes part in this revolving. Thus, The Semazens, the ones who whirl, participate consciously in the shared revolution of all existence.

The Sema ceremony represents a spiritual journey; the seeker's turning toward God and truth, a maturing through love, the transformation of self as a way of union with God, and the return to life as the servant of all creation.

The Semazen (with a camel's-felt hat representing a tombstone and a wide white skirt symbolizing the death shroud), upon removing his black cloth, is spiritually born to Truth. The semazens stand with their arms crossed, ready to begin their turn. In their erect posture, they represent the number one, testifying to God's unity. Each rotation takes them past the sheikh, who stands on a red sheep skin. This is the place of Mevlana Celaleddin-i Rumi , and the sheikh is understood to be a channel for the divine grace. At the start of each of the four movements of the ceremony, the semazens bow to each other honoring the spirit within. As their arms unfold, the right hand opens to the skies in prayer, ready to receive God's beneficence. The left hand, upon which his gaze rests, is turned towards the earth in the gesture of bestowal.

Fix-footed, the semazen provides a point of contact with this Earth through which the divine blessings can flow. Turning from right to left, he embraces all creation as he chants the name of God within the heart. The Sema ritual consists of four parts:

One of the beauties of this seven-centuries-old ritual is the way that it unifies the three fundamental components of man's nature; mind, emotion, and spirit, combining them in a practice and a worship that seeks the purification of all three in the turning towards Divine Unity. But most significantly, the enrichment of this earth and the well-being of humanity as a whole.

Where to see Whirling Dervish Ceremony in Istanbul?

You are most welcome to witness the transcendental pray of the dervish and discover the spiritual face of Istanbul in a centuries-old genuine house exhibiting Sufi heritage in decoration & architecture.

Join this mystical journey at an authentic house that reflects the lives of Dervishes in Istanbul!

Feel the spiritual Istanbul while witnessing the ritual of Sufi Dervishes at the heart of the old town!

Learn about the Mevlevi Order, a centuries-old old tradition of the followers of Rumi, the medieval poet from Konya!

Ticket Office: You can buy whirling dervish ceremony tickets in our Office right accross from the Venu, Dede Efendi House.

The exquisite sema show accompanied by live Sufi music and the unique exhibition experience where the Sema tradition is presented with a spiritual perspective are all together in a fascinating atmosphere.

Sema ritual is more meaningful and more comprehensive with this exhibition where you can find everything about whirling culture from dervish accessories to sculptures, clothes to musical instruments.

Mevlevi takes its name and its founder from Mevlana Celaleddin Rumi (Mevlana). Sema (sufi), a word transmitted from Persian to Arabic, takes place in Mevlevi ceremonies; Used in terms of prayer, prayer, song, dance activities. The philosophy of Mevlevi has been carried to the next generations with "Sema" for more than 800 years.

Mevlana's Sufism is a sufism that symbolizes a journey towards goodness, beauty and goodness in an unlimited love, a human view and an absolute unity in social life, completely stripping of individual ambitions. Sema, formed and developed by taking inspiration from this Sufism, represents a spiritual journey towards kemale, ie a round trip. Each part of Sema, which consists of 7 parts, has a different meaning, but the basic idea is based on the principle of "The main condition of existence is to return". The common similarity between every existing being, from every little bit of the universe to the most distant stars, is its cycle around itself. Starting from this basis, Sema symbolizes the return of the servant as a camileous person who disappeared in Truth and became a mature person, turning towards the truth, glorifying the mind and love, leaving his nafs. This turn, which is made by turning around the heart from right to left, is the embrace of all beings, all creatures with a new soul and with love and love with all its heart.

The cones on the head of the whirling dervishes indicate the tombstone, the hirsque burial on the back, and the shroud on it. Whirling dervishes begin their whirling after their traditional and sacred routines. By linking his arms, Semazen, apparently representing the figure ONE, thus certifying the unity of God, turns his right hand upwards (as if praying to the heavens) and his left hand downward (through the eyes of Truth) as he whirls. This stance represents Mevlana's "reaching the people without taking them from Allah, and his physical immaturity".

Book your seats online and take advantage of discounted prices 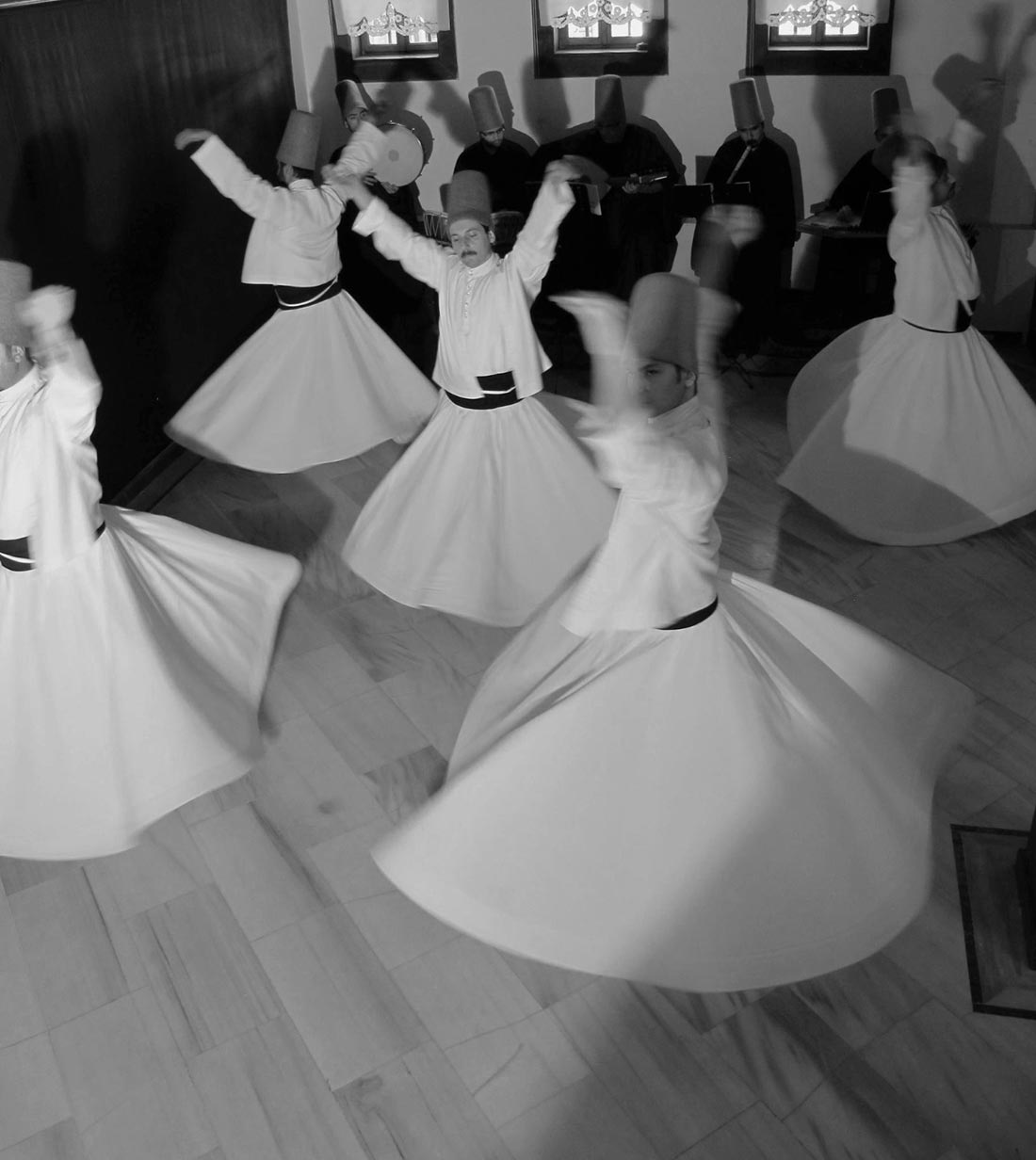 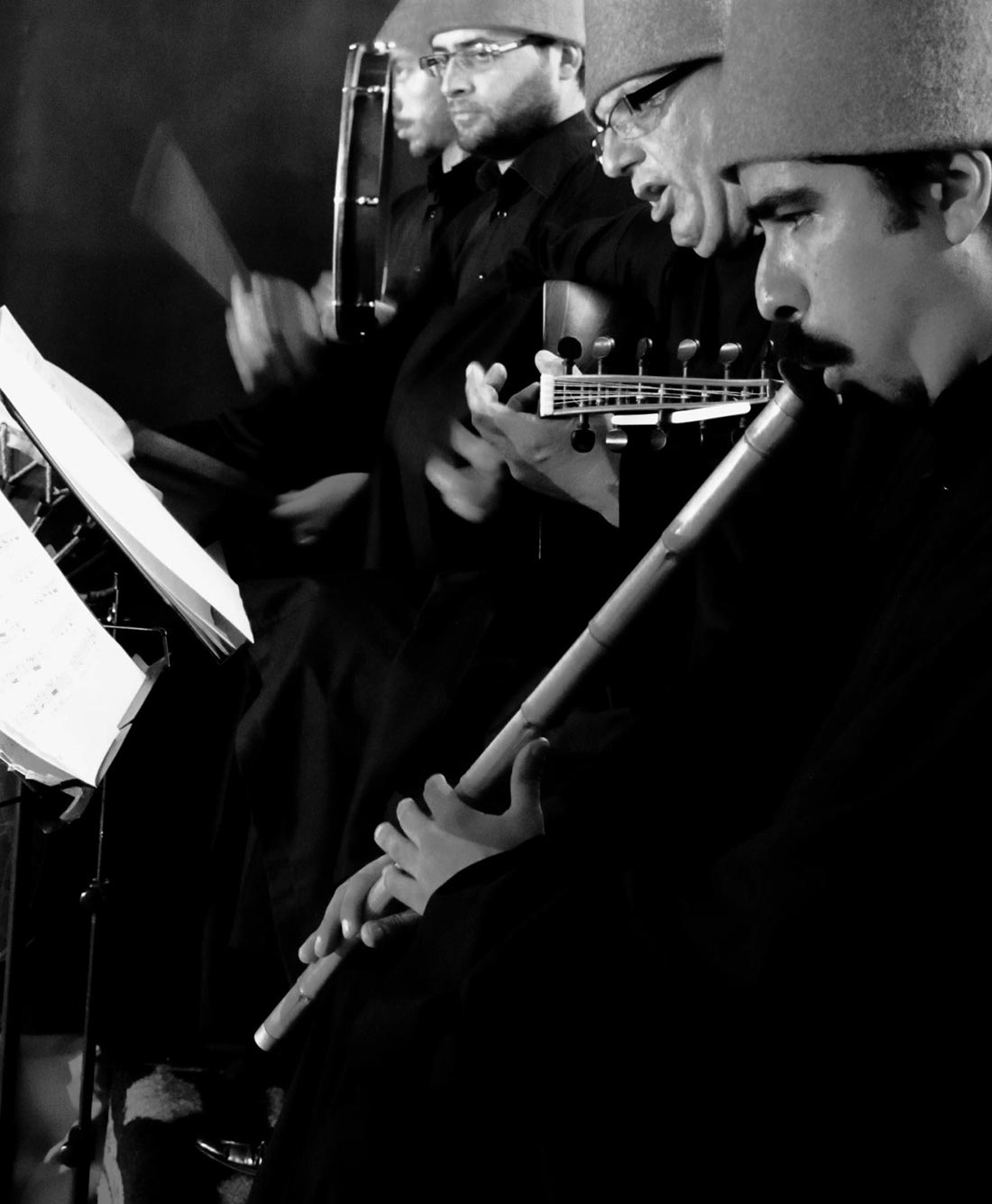 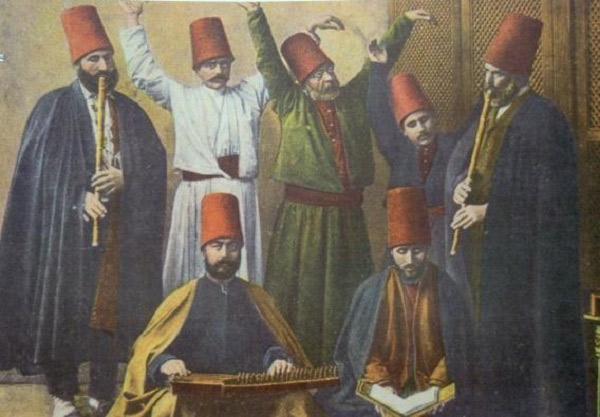 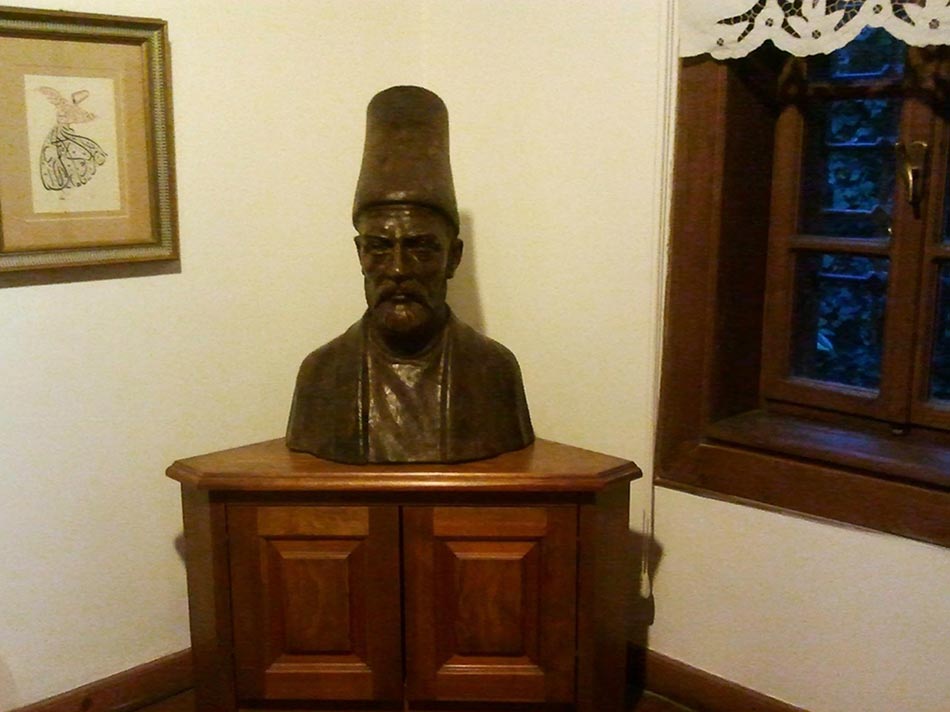 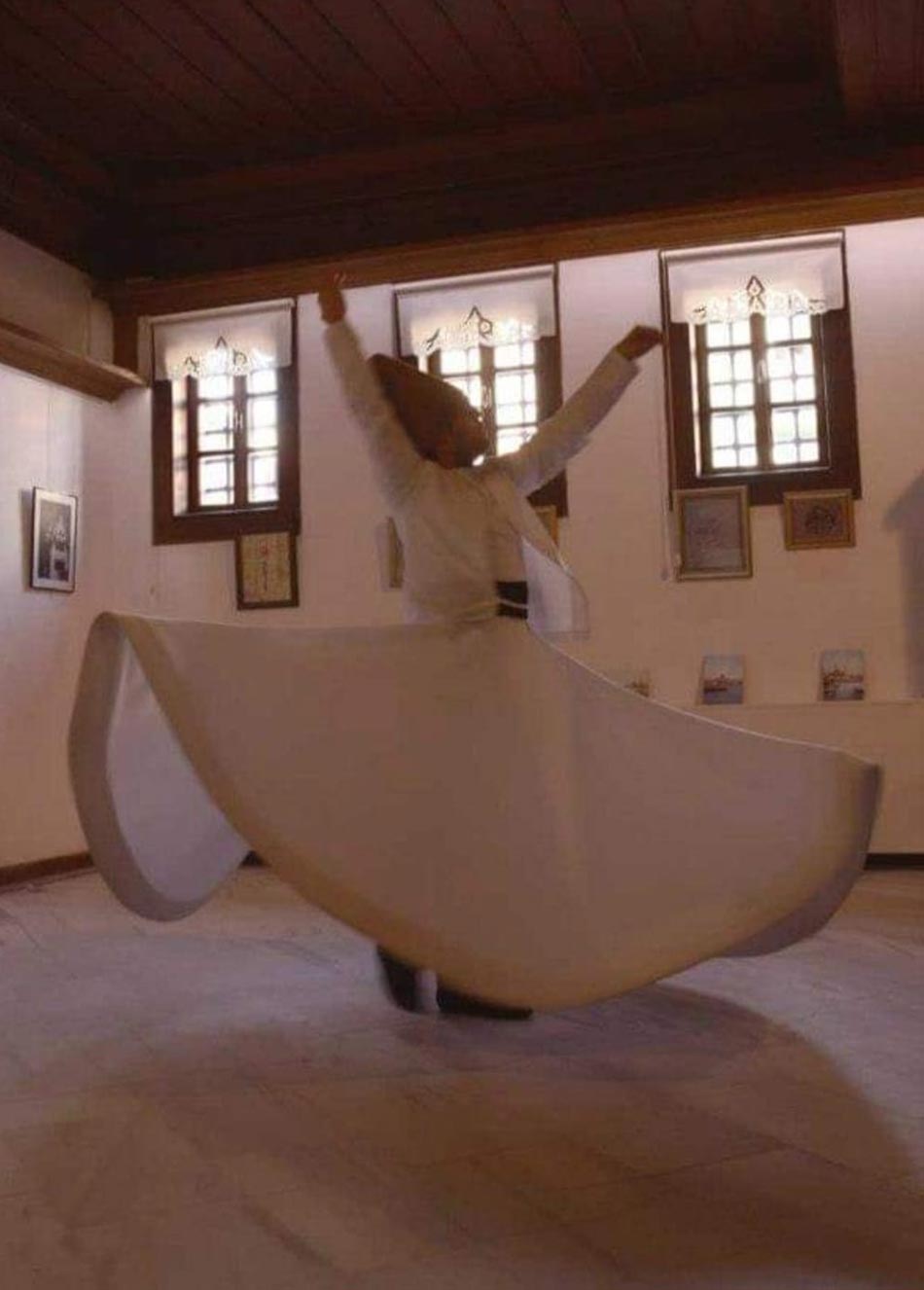 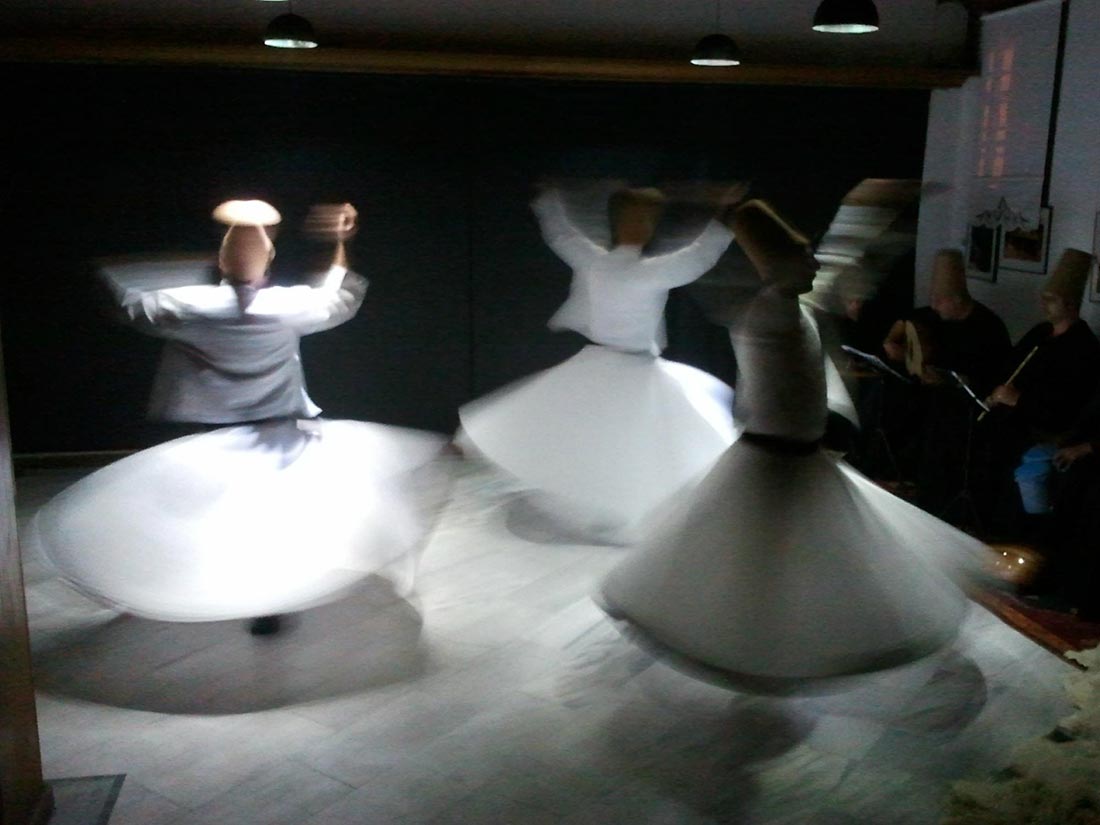 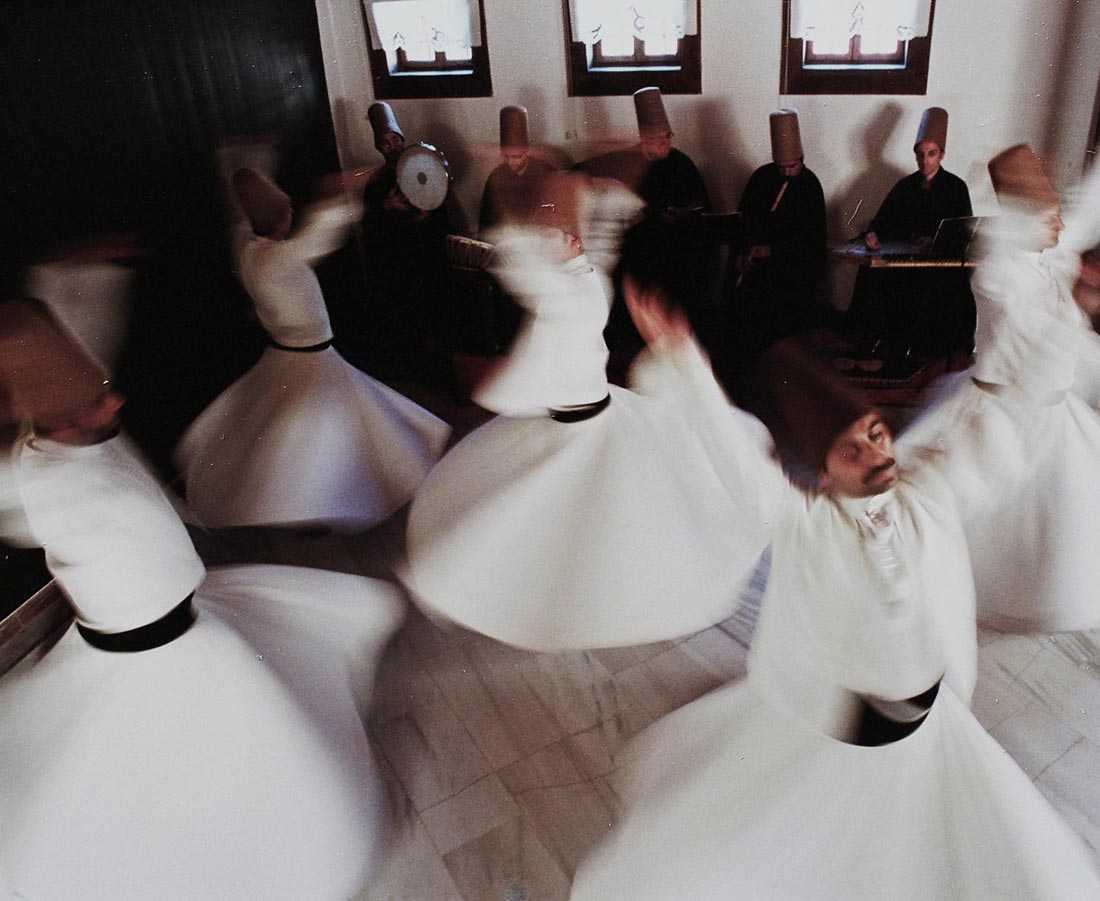 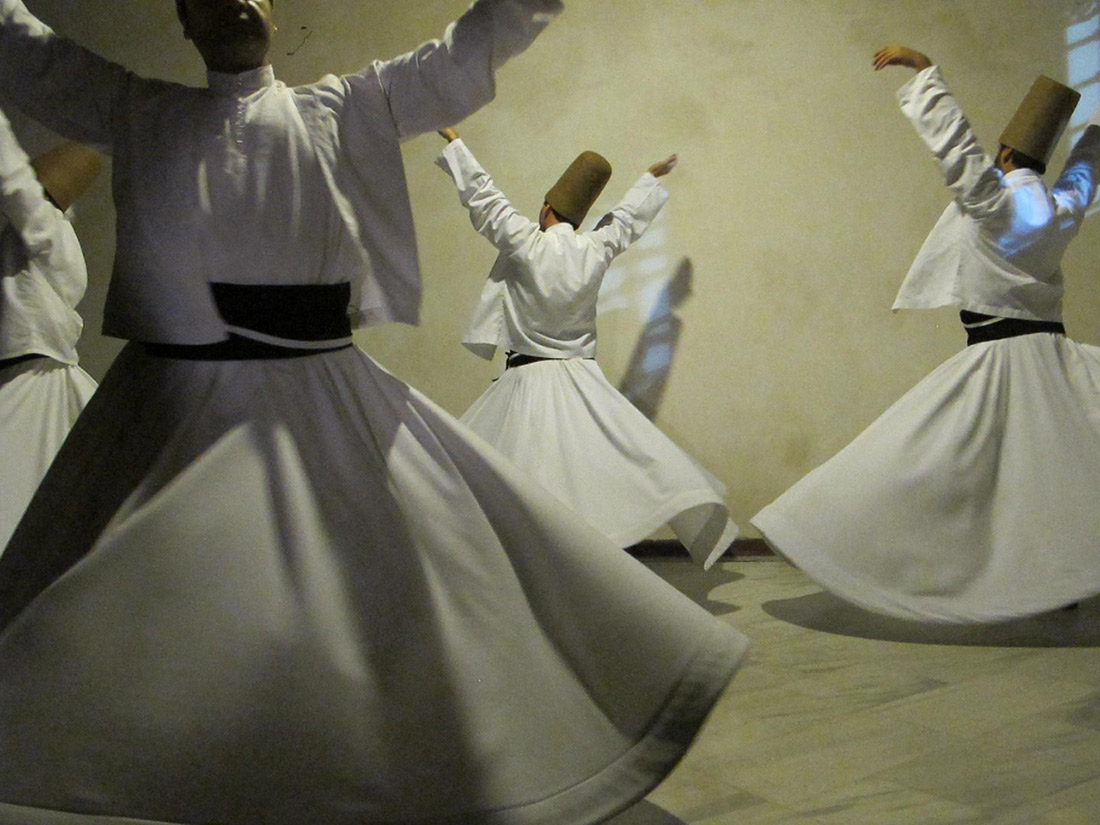