Separating the Asian and European continents, the name of Istanbul's world famous Bosphorus Strait comes from the following mythological story.

According to the myth, the God of Gods, Zeus coveted Io, the daughter of the King of Argos, Inachus. Zeus consummated his love for Io, who took the form of a cloud. His jealous wife, Hera finally learns of the affair and goes ballistic. In order to protect his lover from Hera's fury, Zeus turns Io into a white cow. Hera counters this move by unleashing a cloud of horseflies on the cow, which are so bothersome that Io is forced to cross land and sea in her bovine state. One of the places Io passes through during her escape is today's Istanbul Bosphorus Strait. This strait was called the Bosphorus', meaning 'cow transit', in memory of Io, who swam across the strait, whereby the world refers to the strait by this name based on this intriguing mythological story. In addition to this story, a part of the famous voyage of the mythical Jason's Argonauts occurred in the fast-flowing waters of the Bosphorus as they searched for the golden fleeces. Although it is difficult to base these impressive mythological sagas on scientific proof, the formation of the strait is as impressive as these myths. 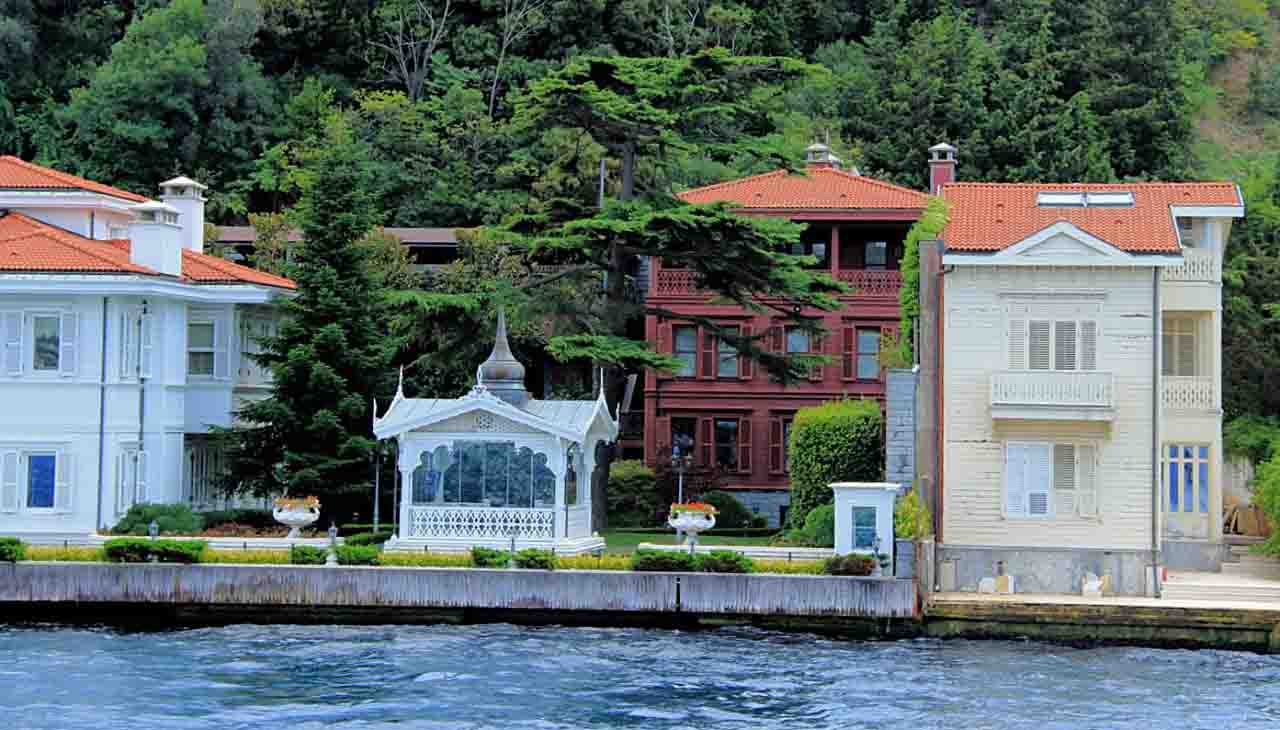 The Istanbul Strait was formed when water flooded a deep valley during the 3rd Geologic Epoch. Thus, while connecting the Black and Marmara Seas. it also became the only waterway that merged Mediterranean and Black Sea cultures. Roughly described as the waterway flowing between Tophane-Salacak to the south and Rumeli and Anatolia Feneri to the north, the Istanbul Strait is 31 kilometers long as the crow flies and 55 kilometers long as ships sail; mariners need to execute 12 maneuvers through the bays and around the promontories. The strait is 1,675 m. wide at the mouth of the Marmara Sea; it twists Overleaf The combination of the twisty contusions of the Bosphorus formed with several bays and promontories, along with powerful currents that change from place to place render this region one of the toughest waterways in the world to navigate. While the Istanbul Bosphorus strait divides the European and Asian continents, it is also an important waterway that connects the Black Sea with the Marmara Sea. 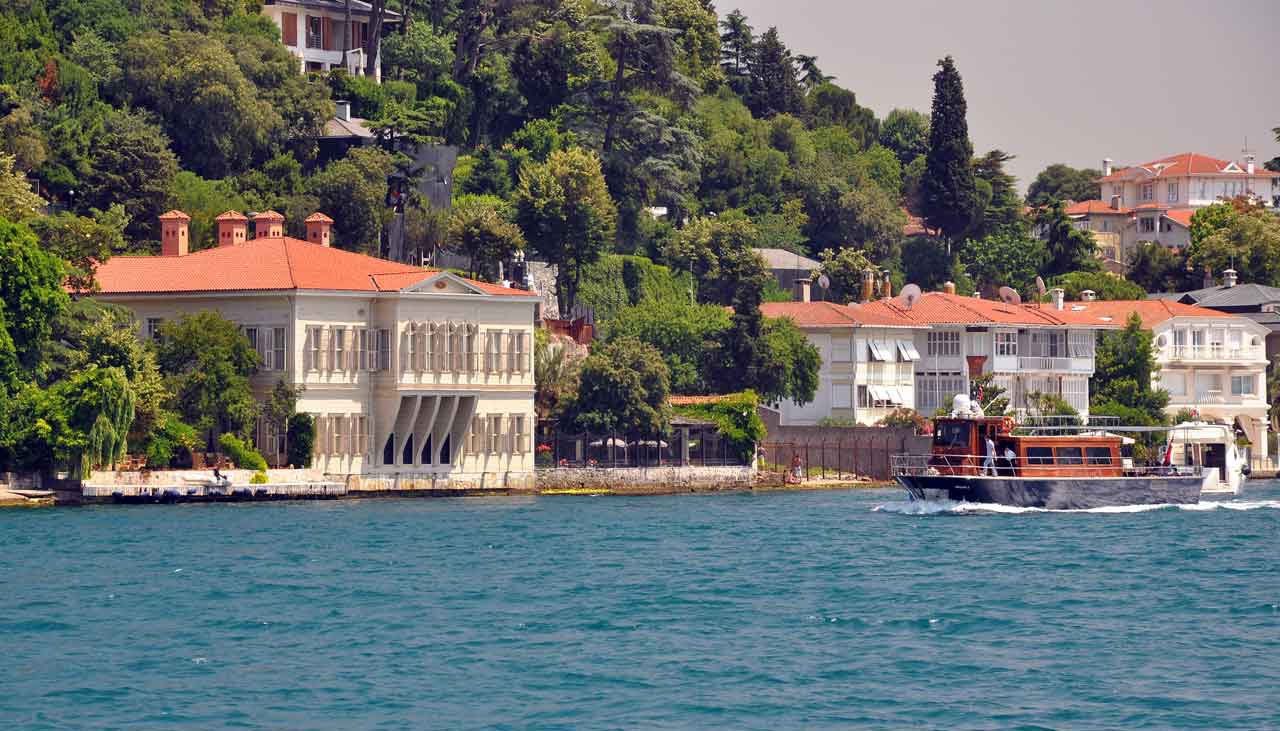 Its way northward and opens into the Black Sea at a width of 3,600 meters. Its narrowest point is between Rumeli Hisar and Anadolu Hisar (698 meters). Constituting of several bays and promontories, the twisty makeup of the Bosphorus are turned into one of the world's toughest navigable waterways as mariners are forced to factor in its powerful, shifting currents. The most important reason for the currents is that the Istanbul Straits are at a lower elevation than the Black Sea and higher than the Marmara Sea. As there is a 40-cm. difference in levels between the start and finish points of the strait, the surface current constant flowing from the Black Sea to the Marmara Sea is most powerful in the middle portion of the strait. Particularly, surface currents start offshore from Kandilli and flow southward at three-four knots, reaching river speed of seven knots whenever northerlies blow fiercely over the Black Sea. What is intriguing is that there are underlying currents flowing in the opposite direction of this powerful current, bringing water from the Marmara to the Black Sea.

Stemming from a difference in density between the two seas, currents turn into countercurrents and whirlpools in some bays and gulfs. One some days of the year, southerlies blow powerful enough to reverse the course of the main surface current. The Bosphorus features an active topography and is formed from hills and slopes extending down to the sea. Terrain reaches vertically up to the plateaus situated at an elevation of 150-200 meters. Some places feature a gradual slope from the shore while other sections of the waterway are quite steep. Located on the Asian side Camlica Tepesi and Yap Tepesi, near the Black Sea, are hills that rise over 200 meters; the Beykoz slopes have the steepest cliffs along the Bosphorus. We can see examples of hills of the same height on the European side around Rumeli Kavagi and Salver. Hills on either side of the waterway are adorned with woods, some dating back 500 years. Sheltering all types of pine, oak, cedar trees, gum, cypress, laurel, redbud and acacias, these outstanding woods compliment the incredible panoramic view of the Bosphorus. Some of these woods have pavilions that are still intact, providing a picturesque background for historical pills at several points. The Cubuklu Hills on the Asian side feature the green Khedive Ismail Pasha Woods. While the vast Fethi Pasha wooded area is situated behind the Fethi Pasha WI, there is another such area comprised of historical trees on the hill and vicinity of Adile Sultan Palace in Kandilli. 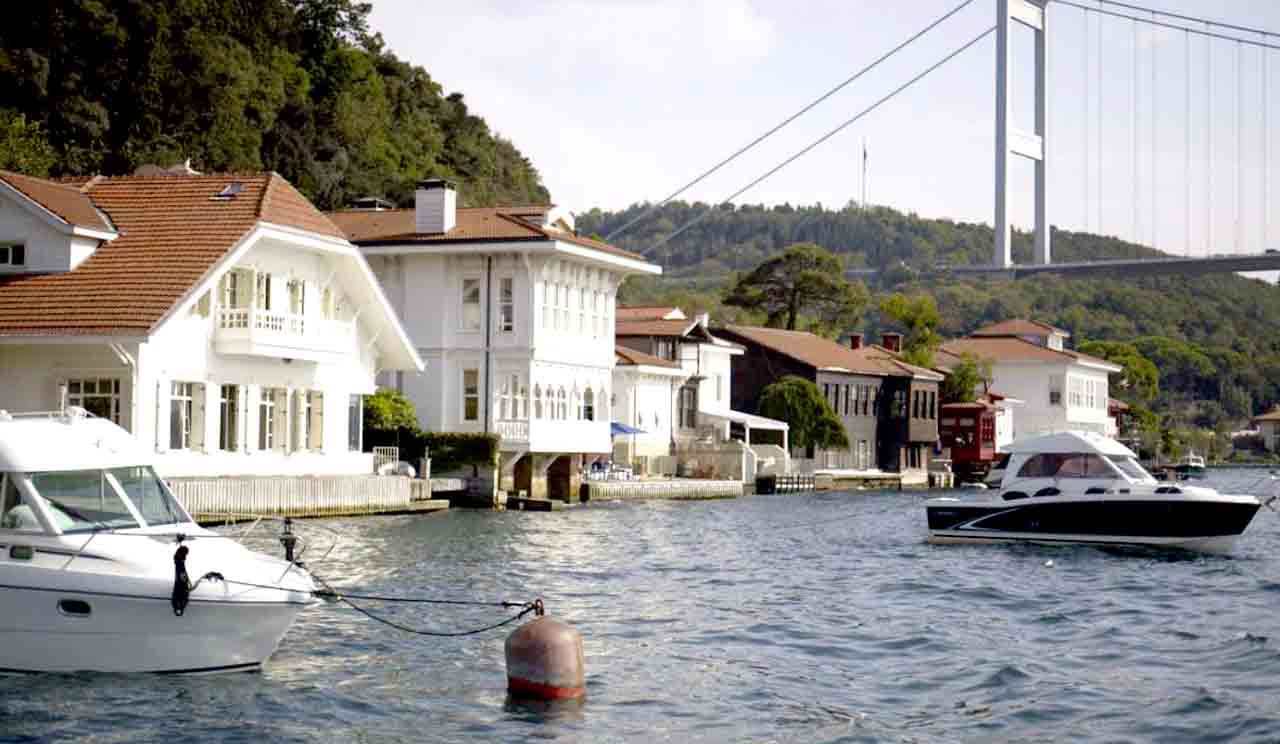 Besides the 200-acre Mihrabat Woods atop of a hill at Kanlica overlooking the Bosphorus, there is another giant wooded area on this side, the 69-acre Abraham Pasha Woods over the provincial district of Beykoz. Also, to the west of Beykoz is the incredibly beautiful Beykoz Pavilion, which is secluded amidst a 20-acre wooded area with monumental trees. Amongst several other wooded areas on the same side of the Bosphorus are the Crown Prince Yusuf Izzeddin Woods, the Kucuk Camlica Woods, as well as the Demirag Woods over Uskudar Pasha Limani. The European side is no different from the Asian side when it comes to wooded areas. Situated over the Ciragan Palace, Yildiz Park features more than 120 different flora species; the 12-acre Naile Sultan Woods between Kurucesme Ortakoy; the Naciye Sultan Woods, which is found on the steep cliff that rises towards the west from Defterdar Promontory between Kurucesme Ortakoy, the Emirgan Woods where tulips in a myriad of colors are nestled next to century-old trees amidst pavilions in Emirgan, The Spanish Embassy Woods between Sariyer Yenikoy, the Huber Woods, the German Embassy Woods, the British Embassy Woods, the French Embassy Woods and Austrian Embassy Woods are a few wooded areas embellishing this side of the straits. 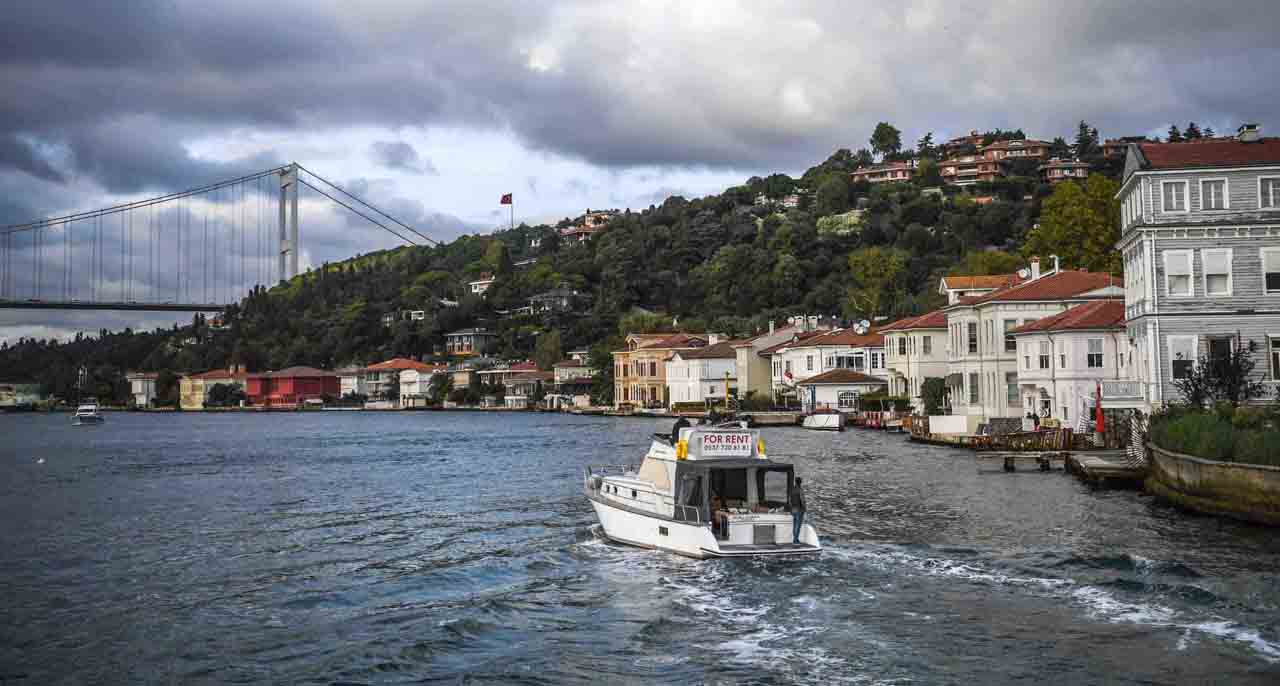 Continuing northwards from the European banks, the green hills bid us farewell from the provincial district of Sariyer near the exit of the strait at Rumeli Feneri. This is one of the exit landmarks into the Black Sea, with the other on the opposite shore at Anatolia Feneri with its myriad of greens. Arousing interest for its geographic features, green wood's wrapping both sides and its intriguing mythological sagas, without a doubt the most precious treasures of the Bosphorus are its historical yalis. These fine structures hold a distinctive place in Turkish architecture. Synonymous with the Istanbul Bosphorus with their sea views in front and greenery to the rear, these yalis have shone light on our recent history as well as helped us to better understand the final era of the Ottoman Empire in a more detailed manner. Some of these structures suspended over the sea are called `yali, which means 'building that laps at the water'. As with old Turkish homes and guesthouses, these structures are also comprised of harem. and selamlik sections, some of which were gathered under a single roof, while others were built independent from each other, with a common garden, Generally comprised of three-story buildings with a marble-clad courtyard with a boathouse, the floor above some of them extends over the sea supported with buttresses.

Several of the them have identical layout characteristics. Most of them have wide, staircases ascending from the lower floor hill to the second floor, which features wide halls, bedrooms, a reception room and library; the ceilings of these are embellished with engravings crafted by master artisans. Priceless carpets laid over Egyptian reeds decorate floors beneath these lavish ceilings. Plenty of large windows were preferred on the facades overlooking the sea and garden, exposing the structures to ample sunlight. The needs of those residing in the yalis would be met by peddlers who sold their wares from caiques. Moreover, other needs of the yalis would be met by house stewards, who plied the waters with caiques that berthed in the boathouses seen in many of the yalis.

Structures would be painted according to the status of their owners; primer red was the choice for yalis belonging to sultans and prominent statesmen. Another determining characteristic regarding these yalis was color; white indicated the owner was a Moslem Turks; gray or green paint jobs indicated the yalis belonged to non-Moslems. Groupings of these fine structures were made not only from a color aspect but from their Bosphorus location as well. While sultans, crown princes and other dynasty members commissioned the construction of pavilions, summer palaces and yalis wherever they liked along the Bosphorus, grand viziers, viziers and council members preferred the district of Bebek. While the intelligentsia resided in Rumeli Hisari, Christians and Jews lived in Arnavutkoy and Kuzguncuk, while rich Greeks and Armenians concentrated in Yenikoy, Buyukdere and. Tarabya. Men of the cloth and scientists preferred the district of Beylerbeyi. Responsible for the city's law and order, the Commanding Officer of the Sultan's bodyguards knew who lived in every yali and recorded this information in his registry. Whenever the sultan wanted to take a cruise on the Bosphorus, his bodyguard would take the helm of the sultanate caique, informing the sultan of the owners of the yalis by referring to his registry as they passed in front of them.

Abdullah Aga was one such bodyguard who earned the appreciation of Sultan Mahmud II. Known to have commissioned a yali and a mosque in Cengelkoy, bodyguard Abdullah Aga's registry held the records of no less than 405 Bosphorus yalis. Many of these beautiful structures of the straits have unfortunately disappeared in a city that has gone through many unforeseen dangers. The total number of structures has since fallen to 366; 193 of these are found on the Asian side and another 173 continue to ornate the European side of the Bosphorus straits today. Although we will try to introduce the architectural and historical importance of these yalis in the following chapter, a boat trip up the Bosphorus shall remind us just how pleasant and precious the yalis are as they recede into the distance behind us. Amongst these fine structures that look as though they are sprinkled along the shores are the lemon-walled, twin-towered, oddly asymmetrical Kuleli Military School, clearly visible as you cruise along the Bosphorus; the Hisar, encountered suddenly after a consecutive row of pi's; elegant palaces as well as the Byzantine-era Yoros Fortress waving farewell to the Black Sea, thus complimenting the yalis in an expansive and panoramic view of the straits.