The Castle at Rumeli

The Rumeli Castle, or Fortress, on a 30000 square meter of land on the European side. It is directly across the Anatolian Castle of the Bosphorus. 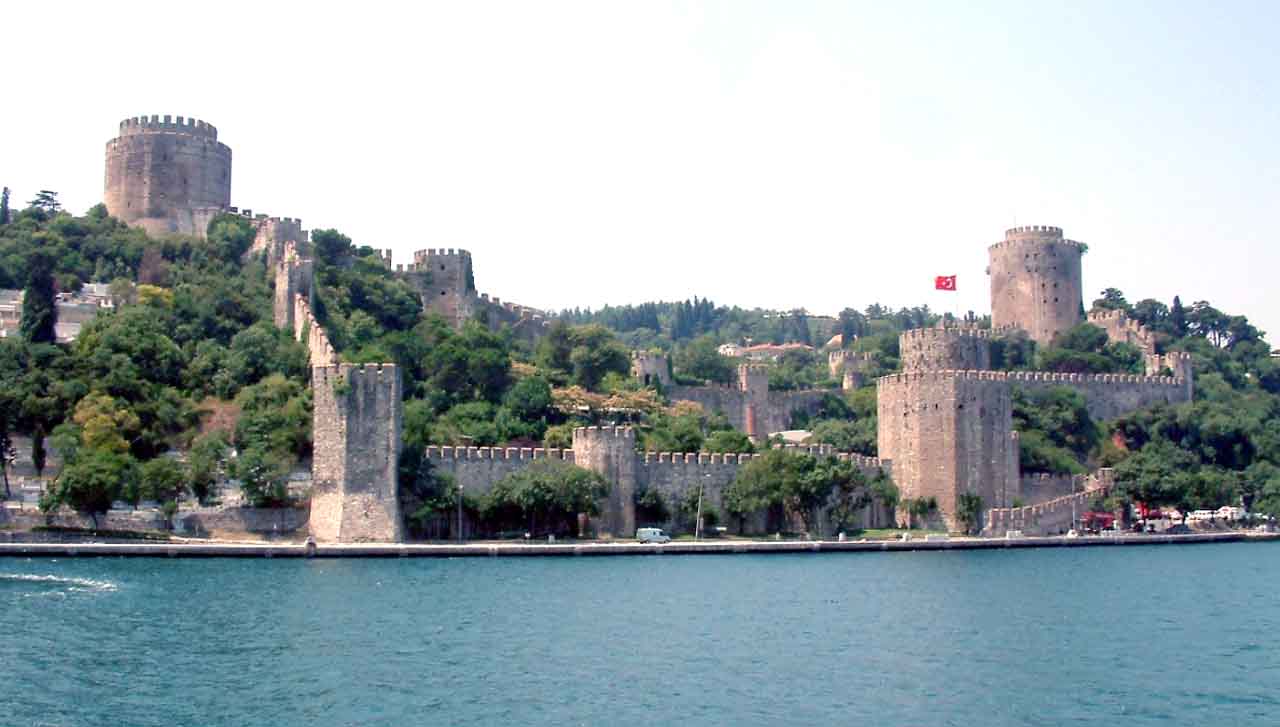 At this point the Bosphorus is at its narrowest (600 meters) location. The castle was constructed to resemble from a distance the ancient letters spelling out Mohammed's name. The three large towers of the castle, the largest in the world was completed in 139 days. The castle has had many names over the years: "Kulle-i Cedide," "Yenice Castle," "The Castle that Cut the Bosphorus." The construction of the castle began on April 15, 1452. Its supervision was delegated to different pashas. Mehmet the Conqueror himself took over the side facing the sea. 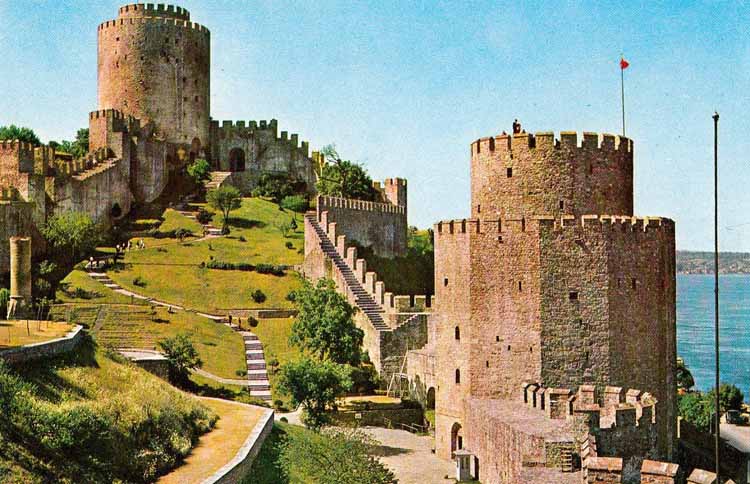 The tower to the right was given to Saruca Pasha; the one to the left was given to Zaganos Pasha, and the one by the shore to Halil Pasha. Therefore, the towers are named after the pashas. The castle was completed on August 31, 1452. The lumber for the construction came from Iznik and Karadeniz Eregli, the stones and lime from various places in Anatolia, and the rubble stone was gathered from Byzantine ruins in the area. There are three large towers--Saruca Pasha, Halil Pasha, and Zaganos Pasha--one small tower--"Little Zaganos Pasha--and 13 wide, small bastions. Counting the basement floor, the Saruca Pasha and Haiti Pasha towers have 9 floors, the Zaganos Pasha tower has 8. The diameter of the Sanwa pasha tower is 23.3 meters, the walls are 7 meters thick and the height is 28 meters. The Zaganos Pasha tower has a diameter of 26.7 meters, the wall thickness is 5.7 meters and it is 21 meters high. 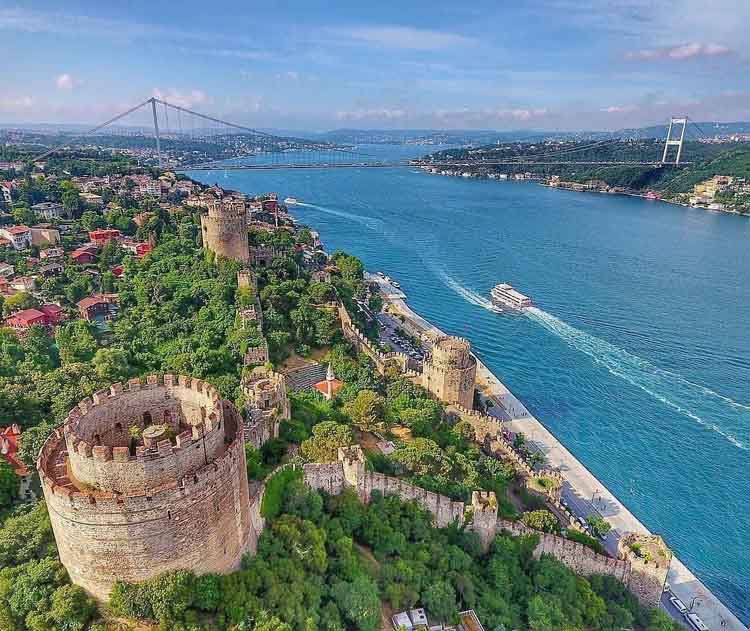 The Halil Pasha tower's diameter is 23.3 meters, the wall thickness is 6.4 meters and the height is 22 meters. The surrounding wall which unites the towers is 250 meters long to the north, east to west 125 meters. There are four main gates and one secondary gate. There are also two hidden gates at the end of the path besides the tower facing south which leads to the underground food storage room. There were two streams, one of which has dried up, and three fountains, two of which have been lost. A broken minaret is all that is left of the mosque. The castle was badly damaged in the earthquake of 1509 but was repaired swiftly. The wooden parts of the castle burned in a fire in 1746. The castle was repaired during the reign of Selim III (1789-1807). When the wooden cones fell off the towers, the inside of the castle became filled with little wooden houses. These houses were expropriated and torn down during the restoration of 1953. Today the Rumeli Castle is used as a museum and an open-air theater. It has no exhibition room. Cannons, cannonballs, and a piece of the chain which is said to have closed off the Golden Horn are exhibited in the garden. Open-air concerts are held within the castle in summer. 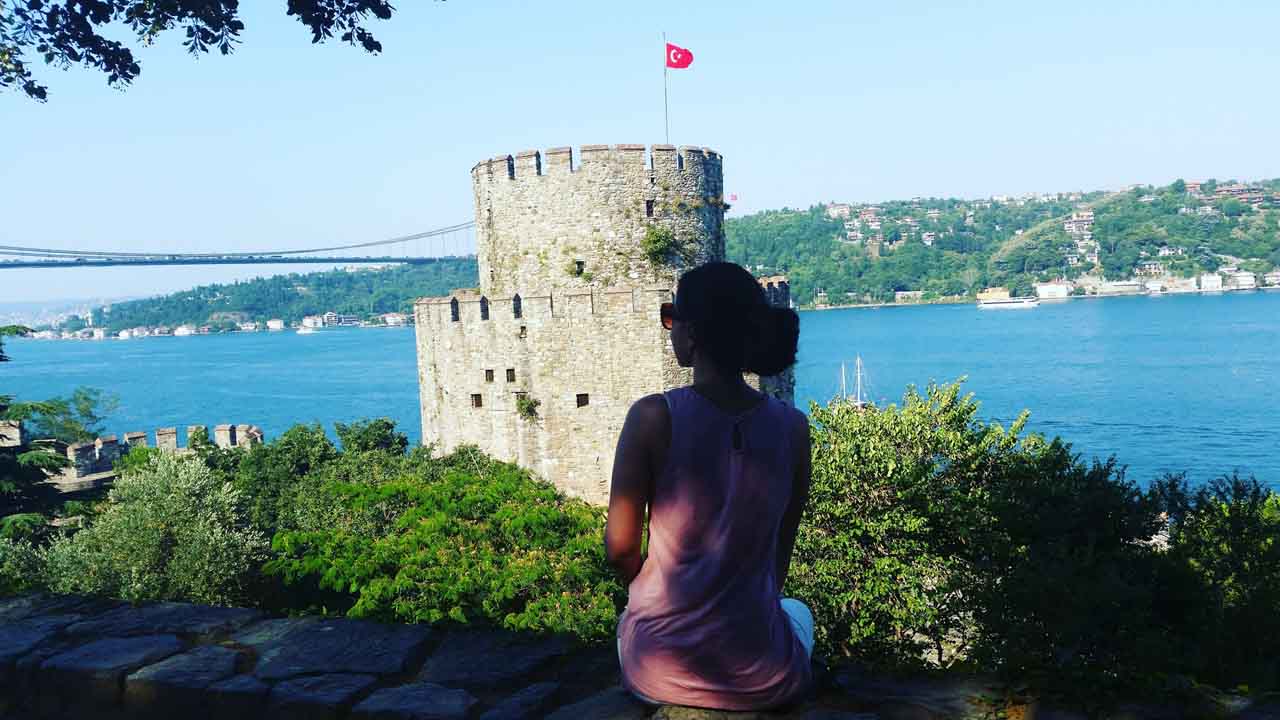