The Hippodrome And Ancient Columns

The Hippodrome is between the mosque od Sultanahmet and the Palace of Justice.

THE OBELISK, THE SERPENTINE COLUMN AND OTHERS

The Hippodrome is between the mosque od Sultanahmet and the Palace of Justice. The Hippodrome was an important sports and entertainment arena during Roman and Byzantine era, up until the 10th century. In this stadium besides chariot (Quadriga) races driven by gladiators, there were musical performances, dancers, acrobats, and exhibitions of fierce animals.

The Hippodrome is shaped like a huge U. To the east was the Imperial Box, like a balcony, with four bronze horse statues. In the middle was the sand-covered arena divided in half by low wall around which the chariots would race.

On this wall were monuments brought to the empire from various places and statues of farnous horse racers and horses. A famous chariot driver was inundated with all kinds of material possibilities. The racers were separated into teams based on political power with colors--green, blue, yellow, red. As the races became politicized, the competition became more vicious and turned into terrible massacres. In short, the Hippodrome was not only an entertainment center, but also a political center. 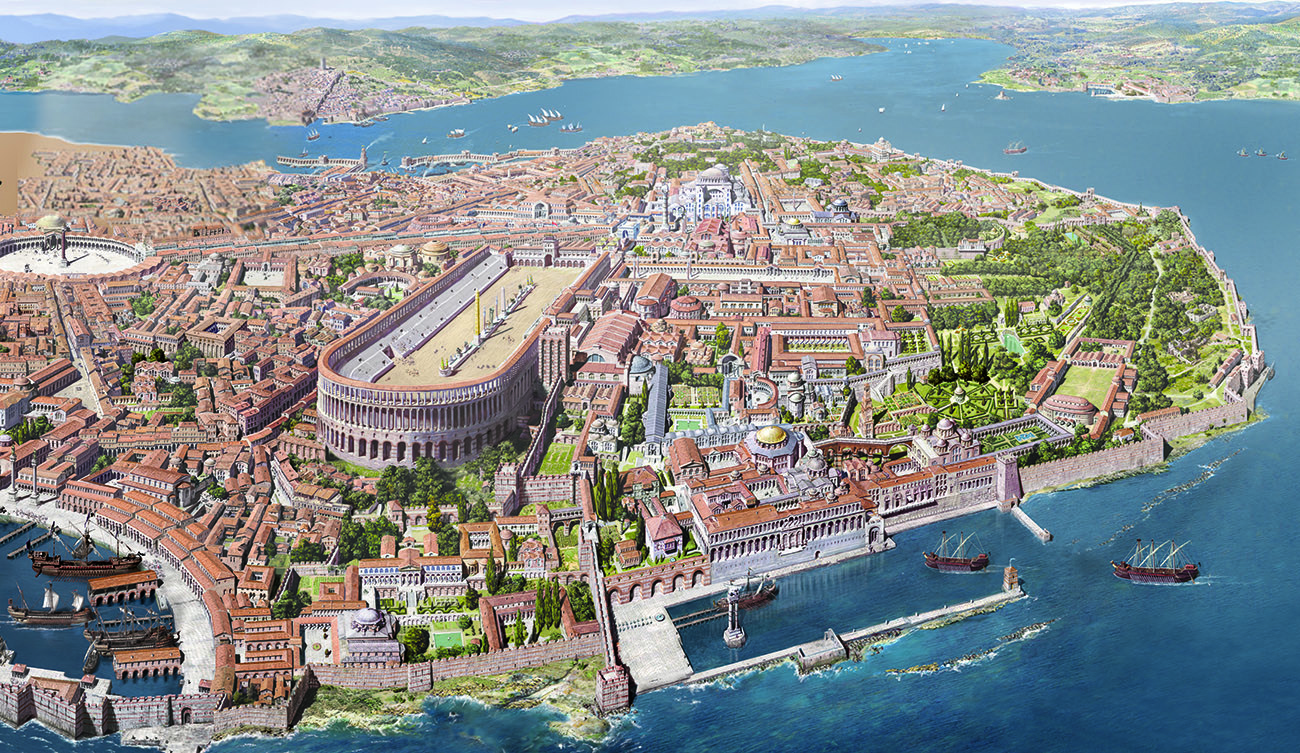 The Hippodrome today takes its appearance from the three remaining columns which have been raised 4-5 meters from the ground. The monuments are arranged in a line on a central axis called "Spina. " The Obelisk located here has become the symbol of the Hippodrome area. It is actually Egyptian, having been erected in 1600 B.C. by the Pharaoh Tutmosis at the temple of Karnak. Made from a single piece of pink granite, the Obelisk was brought to Istanbul in 390 and erected at the Hippodrome. It rests on a marble base on four bronze pedestals. The four sides of the base are embossed. The raised designs depict Theodosius I, his sons, his wife, his assistants in Hippodrome scenes, including the erecting of the monument. There are two inscriptions on the base of the monument--one in Latin, one in ancient Greek. The Latin inscription pretends the voice of the monument itself and describes the reasons for its erection and how long it took to be erected. It tells thus:

"At first I resisted, but I obeyed the order of my great leader. It was necessary to carry the wreath of victory over defeated tyrants, who bowed their necks to Theodosius and his unending line of descendents. They were victorious over me as well, and under supervision of Proklos I was forced to be erected in thirty days."

The Greek inscription is simpler; the stone doesn't speak here, Only the Great Emperor Theodosius could dare to erect four stones lying for eternity in the earth. He called upon his assistant Proklos and thus in 30 days the stone was erected.

The purpose of such obelisks was purely psychological: to increase the power and glory of the emperor in the eyes of the populace.

The Obelisk is 3735 years old, even older than 2700 years Istanbul itself! When Rome conquered Egypt, the Great Emperor Theodosius loaded old Obelisk, made in 1736 B.C. by the Pharoah Tutmosis, on ships to istanbul, to its present location. According to these calculations the Obelisk of which the Pharaoh was so proud of, was constructed 437 years before Abraham went to Egypt!

Serpentine column is another of the monuments in the Hippodrome, brought to Istanbul in the 4th century. This column was made from melted booty taken when the Greek army defeated the Persians. It had a golden cauldron at its top. This cauldron was attached by coils, each in the shape of a serpent. In the last century the head of one of these snakes was found in an archeological dig and was placed in the Istanbul Archeological Museum.

The column of Constantine Porphyrogenetus, the Braided Obelisk, is also found in the Hippodrome. At one time this column was overlaid with bronze tablets.

In addition to those in the Sultanahmet district, there are various other monuments in other districts of Istanbul, usually named either for their locations or for whoever erected them. One of these is the Goth's Obelisk located in Gulhane Park. Although its exact date is not known, it is believed to be fronm the 4th century, Its monolithic body is set on a base; of a tall colutnn whith a capital in the Corinthian style.