Located within the borders of the today's provincial district of Beþiktaþ, the Ihlamur Mansions are situated in Ihlamur Valley, an important excursion site which was covered with linden and plane trees once upon a time. 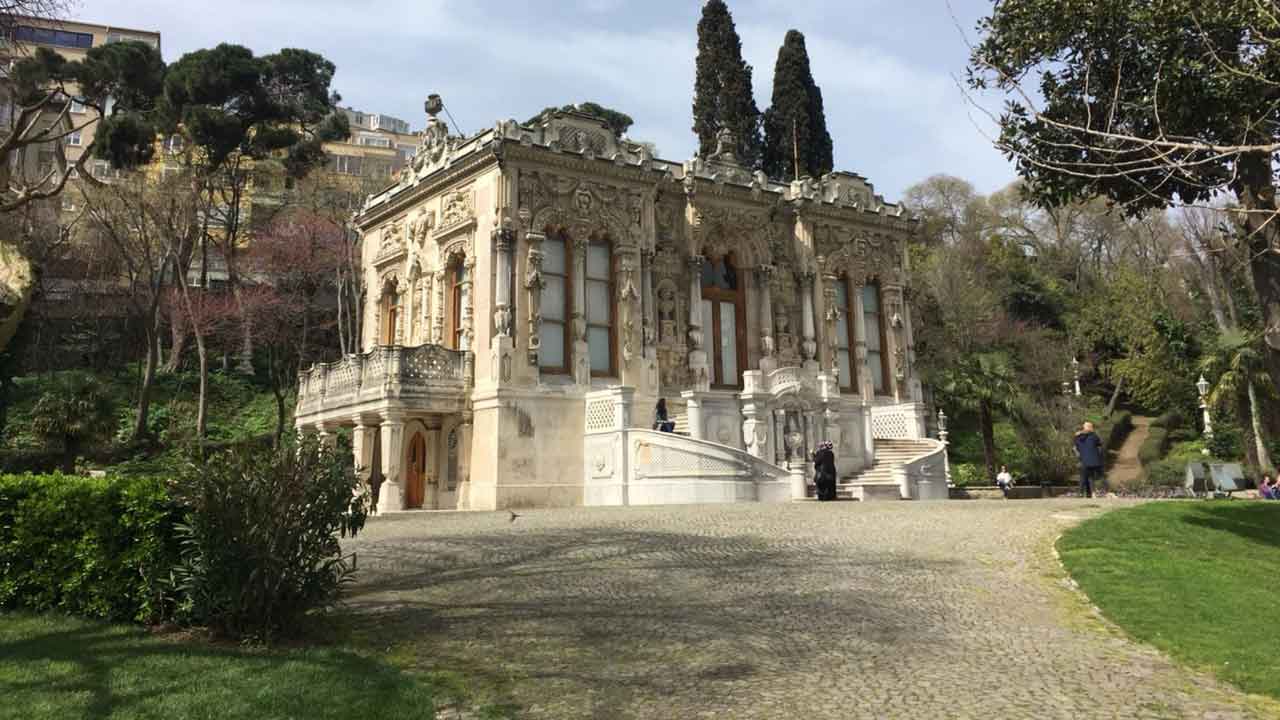 According to title deed records from the early-18th century, though the portion of the valley that once belonged to Hacý Hüseyin Aða, who was the shipyard financial manager during the reign of Sultan Ahmed III was subsequently appropriated by the state, it continued to be known as 'Hacý Hüseyin Baðlarý' until the late-19th century. 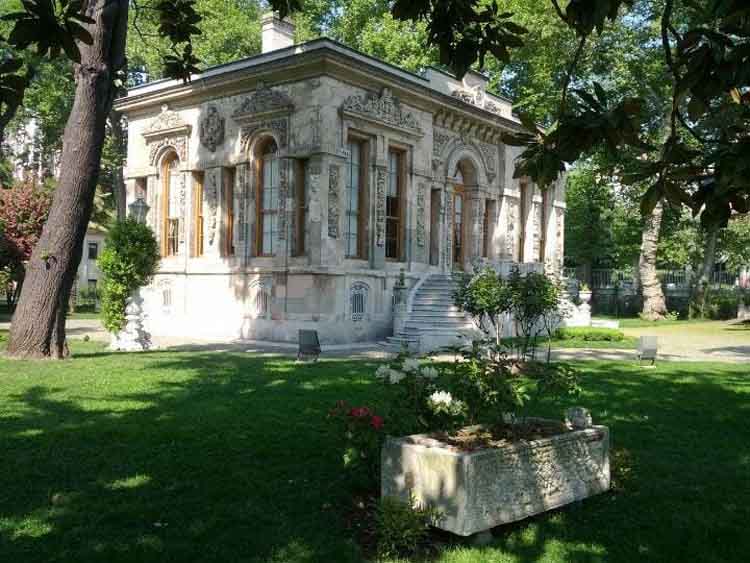 Encompassing Fulya Creek, this splendid wooded area became one of the favorite excursion sites of the public, which had shifted its interest from the Golden Horn to the Bosphorus during this century.

There wasn't much development in the valley in the 19th century. The famous vizier, Seyyid Mehmed Pasha during the reign of Sultan Abdülhamid I (1774-89) commissioned the construction of a small mosque here while he was the sultan's personal bodyguard. A portion of the valley was set aside as the sultan's archery range. One of the target stones remaining amongst those that were positioned at certain distances on the embanked terrain stretching upwards belonged to Selim III. An imperial monogram and a 115-line inscribed work by the famous calligrapher Yesarizâde Mehmed Esad Efendi is found on the stone. From another existing stone, it is understood that Mahmud II also conducted archery sports on this range. 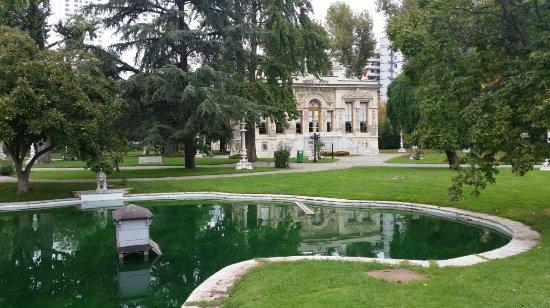 The region was transformed into an excursion site during the reign of Sultan Abdülmecid. In the year 1855, the sultan commissioned a fountain on land covered in linden trees. While the state-appropriated Hacý Hüseyin Vineyards became a favorite recreation spot of Abdülmecid, the Beþiktaþ district also experienced a noticeable increase of activity when the sultan abandoned Topkapý Palace and moved into Dolmabahçe Palace, which he had constructed in an European style. Sultan Abdülmecid hosted the French poet Alphonse de Lamartine at the mansion situated in Ihlamur Valley in 1846. In his notes regarding this visit, Lamartine mentioned that it was a modest structure in a field in the midst of linden trees where he only heard the sounds of chirping! birds and the water of a nearby babbling brook. It's quite possible this structure was a mansion used by the sultan, who was fond of this "Commissioned by Sultan Abdülmecid between 1849-56, the Eclectic exterior of Ihlamur Mansion is ornamented with elegant stone masonry. A view of the Ihlamur Mansion Study."

"Two different views of the reception salon. The cradle vault ceiling is heavily embellished in gold-leaf. here is a porcelain clad fireplace adorned with floral motifs in the middle of the north wall of the room. A high mirror was positioned over the fireplace."

Region, and his entourage on daily excursions. During the subsequent period, Abdülmecid replaced the former structure with two mansions. Known as "Nüzhetiye', meaning 'spaciousness', 'freshness', 'joy' and 'endearment', the sultan frequently visited this place to rest during his reign. 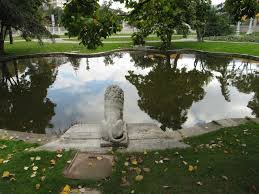 The two mansions constructed in the Hacý Hüseyin Vineyards between 1849-56 are known as the 'Merasim Mansion' and 'Maiyet Mansion'. Of these, the latter was allocated for the sultan's entourage, and occasionally the harem, and is a more sedate structure. As ornate as a small-scale palace, the Merasim Mansion was constructed for official use and is also mentioned in archives with names such as "Mabeyn Mansion', 'Zat-ý Padiþahiye Mahsus Daire' and 'Hünkar Dairesi'.

Arranged as a single floor over a raised basement floor, the Merasim Mansion features a rectangular plan and was constructed from blocks of stone. The exaggerated façade embellishments added movement with garlands, clam shells, vases, bunches of grapes and mini-columns. Fashioned in high-relief form, the decorations make the structure larger than it is. The basement floor is of flat stone, and there are four columns on the side that support a balcony. There is a double-branch Baroque-like marble staircase on the front facade. The structure is entered from the terrace that is accessed via the staircase braches. There are two narrow and long windows found on either side of the vertical door. The two windows on both sides allow plenty of light into the mansion. The marble embellishments also continue in the upper portions of the structure.

Countering the eclectic appearance in the mansion's façade design, the front façade in particular features traces of the neo-Baroque style. The covering system shows diversity such as mirrored and cradle vaults. Upon entering the vertical door, there are two rooms on either side of the entry hall and a foyer providing a connection to the roof. The interior portion of the structure is much plainer than the decorative exterior façades. Engravings of flowers and fruit are seen in the lavish ceiling embellished with gold-leaf over plaster-of-Paris.

The cornices and curtains which harmonize with the ceiling embellishments are complimented with Copeland-brand vases. The piano found here was purchased for Franz Liszt and other famous Western museums during the era of Sultan Abdülmecid.

There are lion statues and an ornate pool in the immediately vicinity of this fine mansion. The second structure on these premises, Maiyet Mansion is situated just beyond the pool. Replete with a plainer appearance, there are still some Eclectic influences in this mansion. A double-branched staircase is situated in the entrance facade of the structure, which has a single floor over a basement. There is a hall and four rooms in the middle of the entrance.

According to Law No. 431 ratified in 1924, palaces, mansions and mansions that belonged to the sultan and his family were regarded as the property of the people. Left relatively neglected for 25 years after 1924, the Ihlamur Mansions were handed over to the use of Istanbul Municipality by the Grand National Assembly in 1951. This was when the Maiyet Mansion was arranged as the Tanzimat Museum whereas the other structure together with its furnishings was opened to the public. These historical structures were put under the aegis of the Directorate of National Palaces in 1966. After an extended restoration period (1976-85), the Ihlamur Mansions were reopened to the public as a museum-palace.