Situated in the midst of the giant 42.5-acre Hidiv Ismail Pasha Woods that stretch from the shores of Çubuklu up to the summit of the hills, the villa dazzles in all its splendor at the top of the woods. 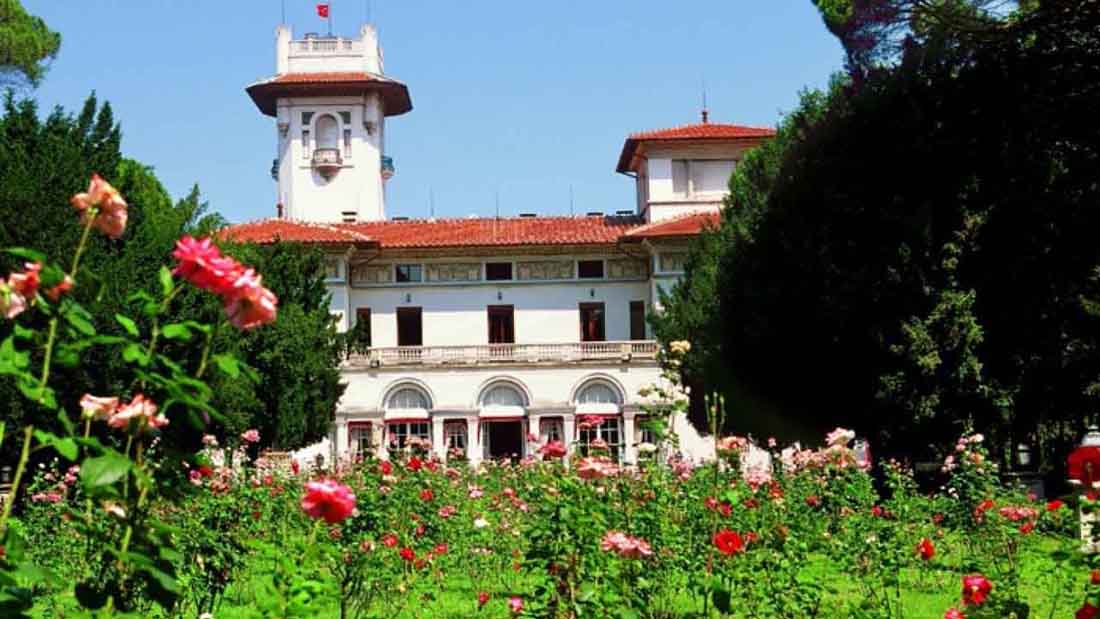 Besides its fine architecture, this beautiful villa is renown for its woods featuring a diverse range of vegetation and trees. In addition to arboreal diversity such as pistachio pine, pinkbud, London plane and Mediterranean laurels, the manicured gardens offer a rainbow of colorful tulips of incomparable beauty. 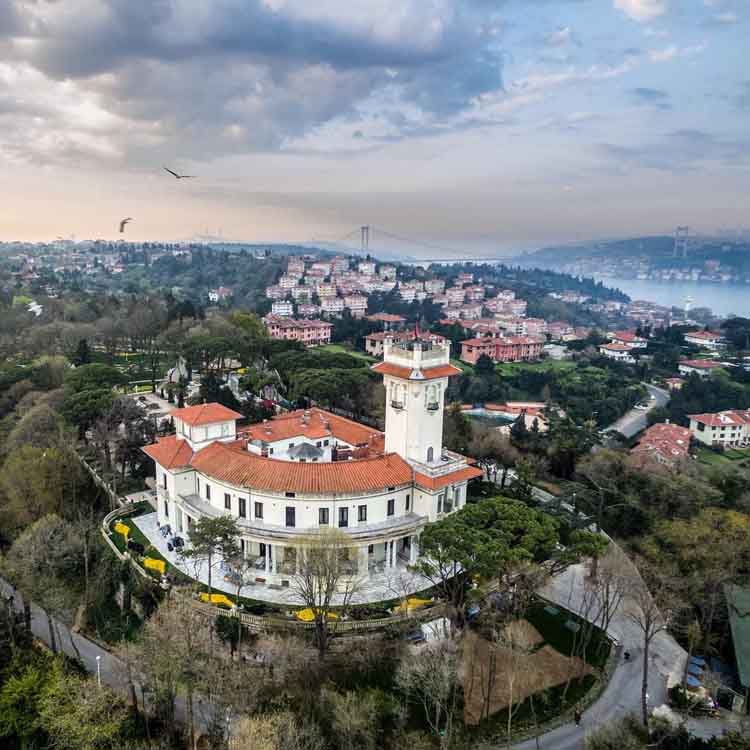 This region where the woods and villa are found was also used during the Byzantine-era. Ancient sources mention that there was a monastery established by St.Alexander where monks known as "The Wakefuls' because they took turns worshipping in the monastery night and day. The monastery's founder, St.Alexander was buried in his region after his death in 430. There are also Byzantine-era aqueducts and cisterns found inside the wooded area.

What was once state land during the Ottoman period, this area eventually became an important excursion spot of the city. The vegetable gardens planted in the suitable portions of the woods met the needs of the palace. Later on, the terrain on which the woods were situated were acquired by the Egyptian Khedive Abbas Hilmi Pasha, who had the splendid white villa, which from the Bosphorus appeared to be just like a seagull on the hill. 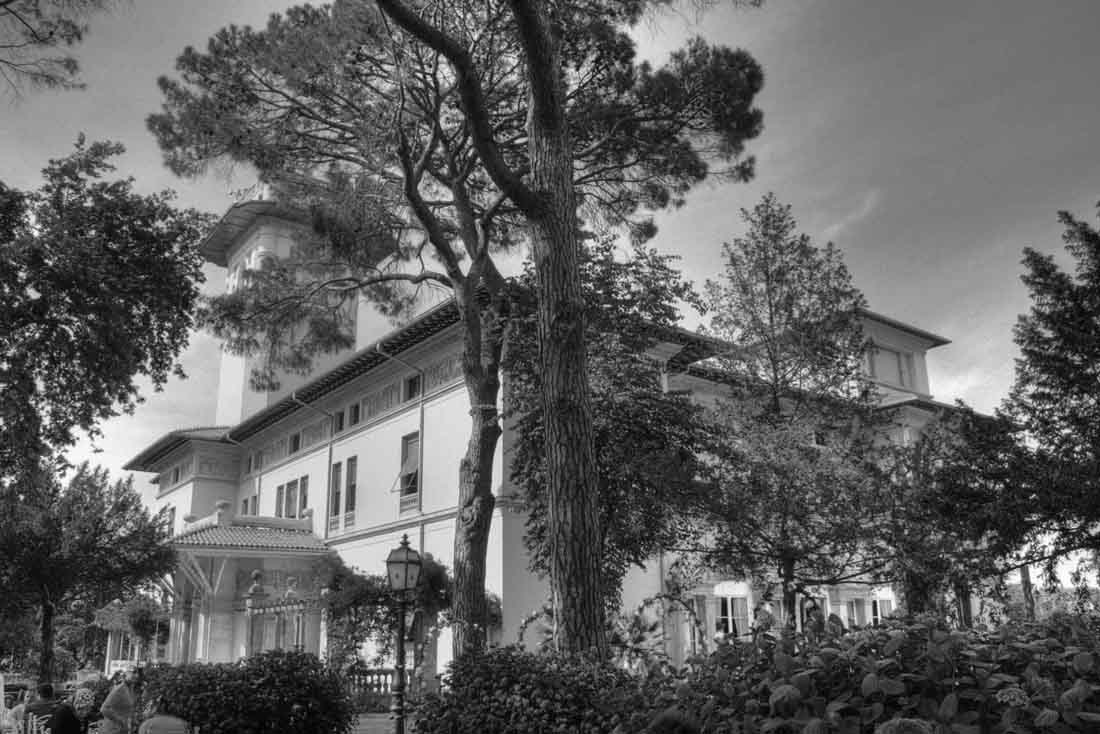 Born in Alexandria in 1874, the villa's builder, Abbas Hilmi Pasha was the last khedive (Ottoman governor) of Egypt. His father was Khedive Tevfik Pasha and his mother was Emine Valide Pasha, who was bequeathed the rank 'pasha' by Abdülhamid II. After studying at the imperial school in Egypt, Hilmi Pasha was trained at the Vienna War Academy. He was brought to the Egyptian Khediviate at the age of 18 with a decree of the Ottoman State upon the death of his father in 1892.

Around the time the young Khedive. Abbas Hilmi Pasha arrived in Istanbul to muster the aid of the Ottomans to counter the political chaos in his country, he acquired two wooden yalis on the shores of Çubuklu in 1903. After residing here for some time, Hilmi Pasha "The last Egyptian Khedive, Abbas Hilmi Pasha commissioned the construction of the Khedive's Villa within the huge woods situated at the top of the hills of Çubuklu. The monumental fountain found in the mansion's middle hall. A spout is in the center of the fountain, which is surrounded by 16 massive marble columns"

Bought the slope behind them and began work on a property that was calle the Çubuklu Summer Palace. Planting linden, horse chestnut, yew and pine nut trees around the mansion, Hilmi Pasha erected an electric power plant to generate his own energy, providing the local community with surplus electricity. This accomplishment of the pasha can be considered a rather interesting enterprise at a time when the palaces had yet to be hooked up to the city's electrical grid.

Constructed just like a baby palace on a piece of property of one square kilometer, it is the handiwork of the Italian architect, Delfo Seminati. Its most striking feature is the lofty flat-roofed tower, which offers panoramic views across the Bosphorus. The Khedive's coat of arms can be seen in the elaborate metalwork over the main entrance Inside, Art Nouveau glass doors open onto a circular lobby ringed with paired marble columns with a 1.80-cm tall monumental fountain playing in the center, encircled by eight pairs of massive marble columns. Gold gilded floral figures are engraved into the outer door entry, which is reached via a marble staircase.

Water flowing from this fountain pours into a shallow pool on the floor. While it is open over this section, there is a rich stained glass window featuring 8-10 shades at the top point reaching the roof. This part is covered with a glass lighthouse with the intention of protecting it from outside influences. While the kitchen is found on the left side of the hall, there is a living room clad entirely in marble on the right side. There are corridors on two sides of the entry of the living room. While passing through the right corridor into two intertwining rooms, one passes from the left corridor into a corner living room with a mirrored ceiling and crystal lighting. This living room overlooks a marble chamber with a large window. The mahogany planks covering the ceiling of the concave chamber situated on the lower side gives the building a fancier appearance. The 24 marble columns found on the chamber's marble terrace overlooking the Bosphorus props up the bedroom found on the upper floor.

There are six rooms on the upper floor accessed via a marble staircase. Three of these rooms overlook the inner garden. There are two living rooms which have their own inner bathrooms, toilets and bathing rooms. One of these rooms covered with nail-free wooden clad ceilings belonged to the khedive. The mirrored cover of one of the wardrobes found inside was also the door of a secret passage which led to the middle hall.

Surrounded by marble terraces, the building features an adjacent observation tower, which has an elevator, as well as a flight of steps leading topside. Accessed from the side corridor remaining on the left side of the first floor hall, the original elevator which belongs to the observation tower is still in working condition. The tower has a balconied middle floor and an outdoor terrace.

The Khedive used the villa in summer right until the 1930's during which time Pierre Loti visited it and expressed a preference for the original waterside palace. The Egyptian sold his retreat to the Istanbul Municipality on February 3rd, 1937 and departed for Switzerland where he died in Geneva in 1944. The beautiful building was left to molder until 1984, when the Turkish Touring and Automobile Association under the farsighted leadership of Çelik Gülersoy took it over and restored it. The Istanbul Municipality organization, Beltur currently offers a restaurant and garden café.