Topkapi Palace was both an administrative palace and the royal residence. It was completed by Mehmet the Conqueror in 1473, shortly after his conquest of Istanbul.

It was used by the Ottoman dynasty until the 19th century when they moved to palaces along the Bosphorus. After the Republic was declared, Ataturk established a decree on April 3, 1924 stated that the palace become a museum. In different eras, under various sultans, with additions and restorations, the palace became a magnificent place, in shape, size, and function. It became a reflection of the Ottoman State itself. The architecture also reflects the unity of protocol and hierarchy of the Ottoman period. The rise and fall of the Empire are artistically related in the palace. Once the palace became a museum, Divan-I Humayun section was reserved for ail exhibition of weapons from the Early Islamic Era to the beginning of the 20th century. 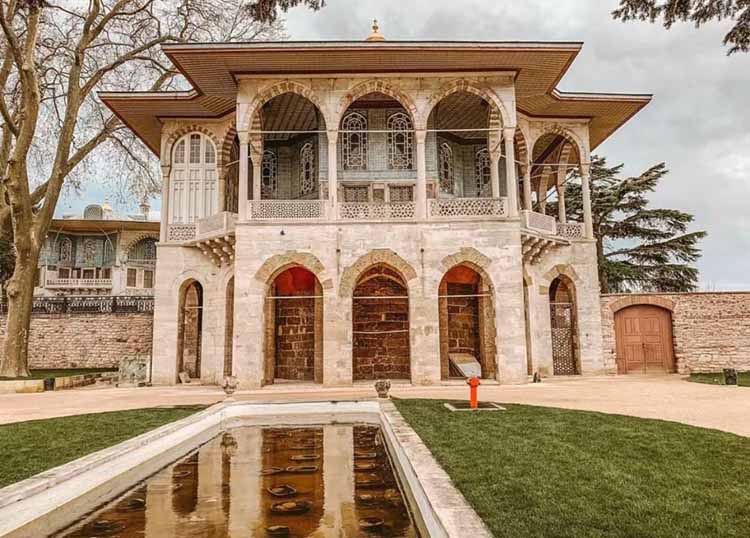 Facing the Golden Horn, the room where the Grand Vizier met with the Council of State is connected to the secluded Harem apartments through a small, barely perceptible door, the "Carriage Gate." The Council o State is connected to the Royal Stable from which the sultan would leave the palace, through the royal garden on the Golden Horn side. The Royal Stable was one of the first buildings to be built. It is in a separate lower courtyard, on the border of the palace grounds. Only a few of the sultan's favorite horses were kept here. In palace life this area was supervised by an "Imrahor." The "harness treasury" in it was a real treasury of horse racing equipment. This equipment was used particularly in parades and as gifts to be sent to rules of countries. Of the palace's more than 12,000 pieces of Chinese and Japanese porcelain ,2500 are displayed in the kitchen. In this section more than 1000 cooks and assistants prepared food and sent it off to various sections of the palace. The display of porcelain, which selected pieces of the world's richest collection, is arranged chronologically.

One part of the kitchen has been preserved as it was in the past; the other part displays porcelain and glass items made in Istanbul. A separate section holds silver pieces and a collection of European porcelain. The incomparable Chinese celadon pieces are in the salon to the right at the entrance. The display includes blue and white pieces, monochrome acid polychrome pieces, ending in the Japanese porcelain. In the "helvahane" section copper pots and pans, coffee making utensils and tombac used in daily life are displayed. Very valuable wall and table clocks rind pocket watches date from the 16th-19th centuries. Clocks from many different makers were given as presents to the palace. The largest among them is the English clock with an organ inside, which is 3.5 meters high and one meter wide. Among the interesting pocket watches are those containing the portraits of Sultans Abdulmecit and Abdul Aziz. 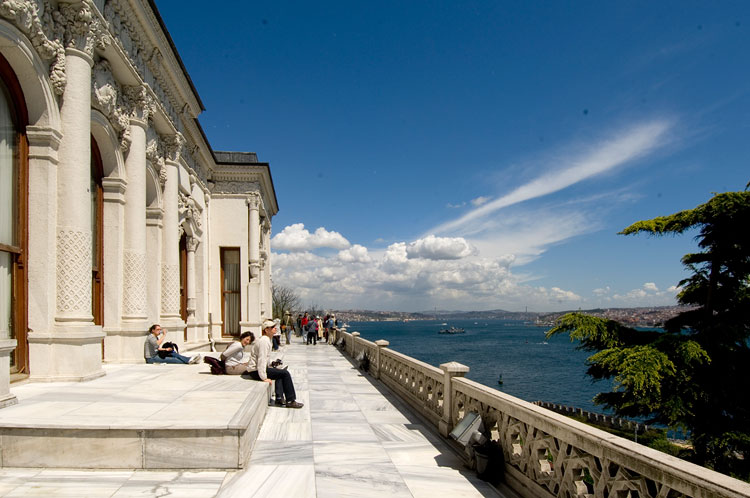 The bottom of the birdcage which hangs from the dome is an enameled clock room once used as the Throw Room with a domed roof and tiled walls contains the sword of the Prophet Mohammed as well as his bow and, preserved in a valuable box, his mantle. This room has a " large decorative, domed silver cage. in the other cabinets in this room the Prophet's seal, hair 44 from ins beard, an autographed letter and his footprints are displayed. One of the first handwritten Korans, the keys to the Kaaba, and the swords of some important people are also exhibited here. In the large hall exhibitions are changed periodically, including the rich variety of documents, books, miniatures, writing sets, and other valuable items. Portraits of the sultans are displayed. The double-headed sword of Holy Ali is also in this section. 7there are several kiosks in the Topkapi Palace which are like the jewel boxes. Faith Kiosk, (The Treasury) the Only wooden pavilion of the palace, the 17th century richly decorated Baghdad and Revan Kiosks, and the Mecidiye Kiosk. The Lower floor of the Mecidiye Kiosk leading to a terrace is used as a restaurant. The terrace of the Baghdad Kiosk is the best place to view the incomparable beauty of the Golden Horn, the domes and minarets of Old Istanbul. The gently sloping palace gardens are open to public as a large city park. 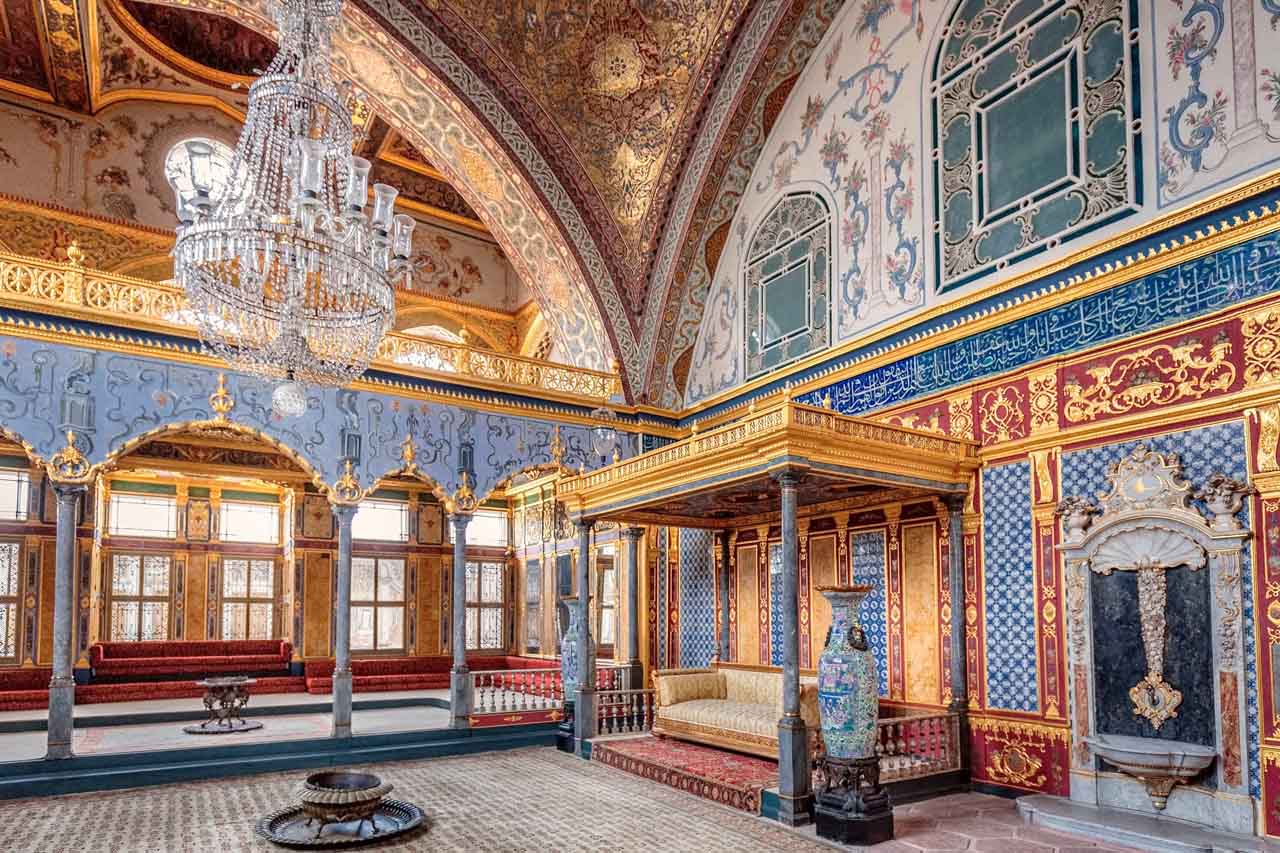 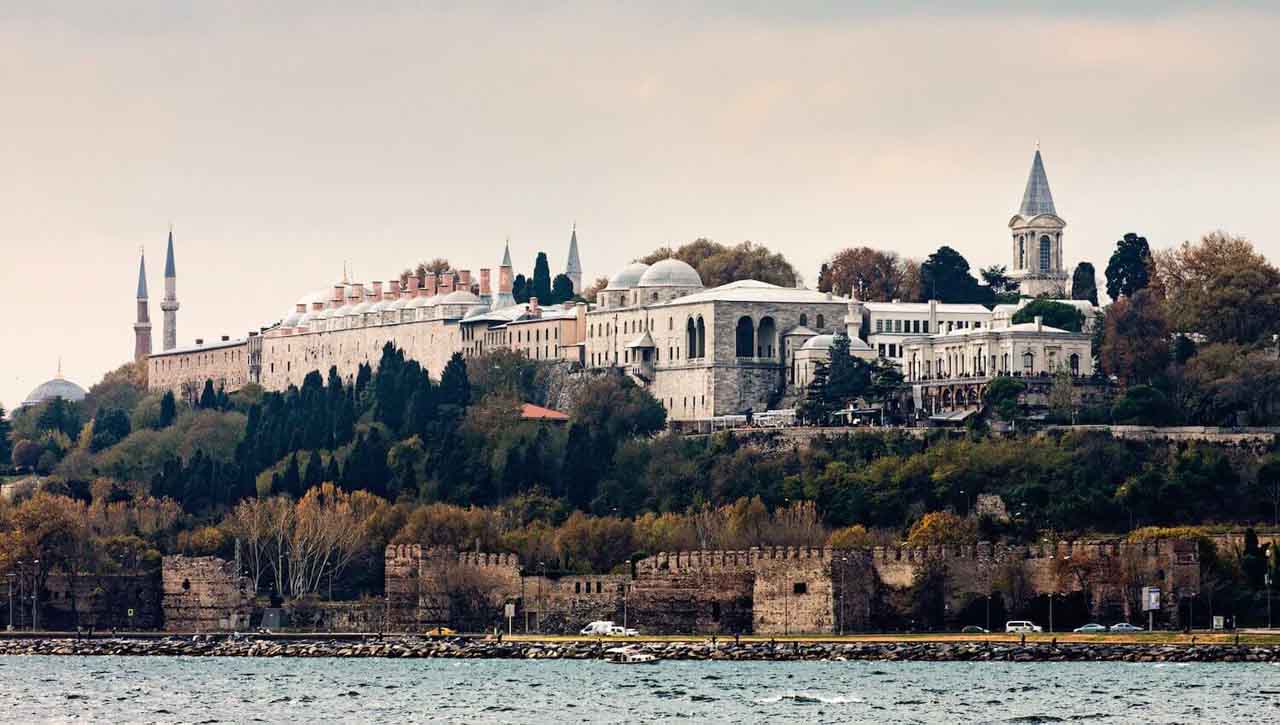