The wooded area in which Ciragan Palace is located extends from Beþiktaþ to Ortaköy. These woods are one of the largest found in the city and have quite a long history. 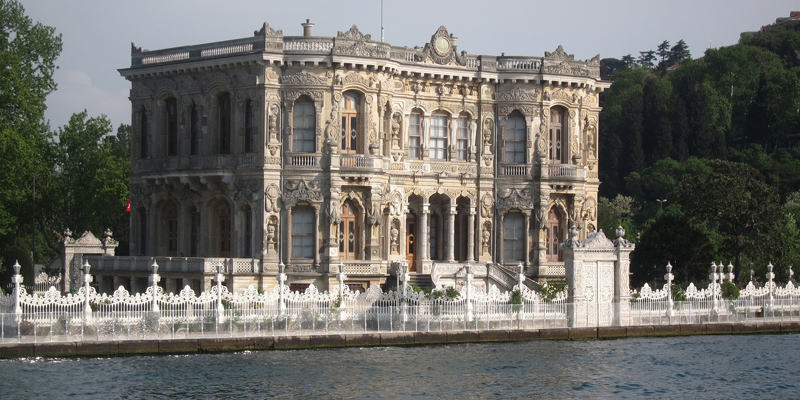 While the historian, Hammer recorded that the name of the woods was mentioned in Byzantine sources, he also wrote that the mythological hero Pan played his flute at this place, which was covered with laurel trees. 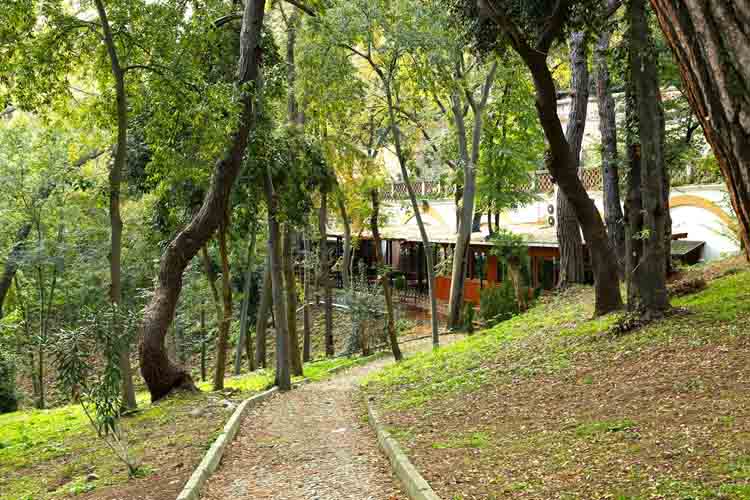 Ottoman records pertaining to the woods began with the reign of Sultan Suleyman the Lawgiver (1520-66). Known as the 'Kazancýoglu Gardens' during the late 16th century, the woods became state property during the subsequent period. It is known the first buildup occurred during the reign of Sultan Ahmed I (1603-17) when he had a hunting lodge built here. This beautiful wooded area was one the favorite sites of Murad IV for hunting and recreation; he presented the small pavilion situated here to his daughter, Kaya Sultan. A half-century later, Ahmet III allocated the woods to Mehmed Pasha, who was the brother of the grand vizier and son-in-law Ýbrahim Pasha. The wooded area where the Ciragan entertainment was held during the Tulip Era in Ottoman history became one of the most popular spots in the city. The region where the woods are found maintained its importance during the subsequent period. Ascending to the throne in 1789, Sultan Selim III frequently visited this region he was quite fond of, constructing a pavilion amidst the woods for his mother Mihrisah Sultan. Also known as Beþiktaþ Hill, this region began to be referred to as 'Yildiz', after the sultan named the pavilion 'Yildiz'. Ascending to the throne in 1808, Sultan Selim III's successor, Sultan Mahmud II continued the interest in the woods when he had a small pavilion built here and arranged the landscaping as well. Later on, Sultan Abdul Aziz, who had Ciragan Palace constructed along the shore, commissioned a bridge to link the woods to the palace. The woods were known during this period as the 'Mabeyn Gardens' of Ciragan Palace. 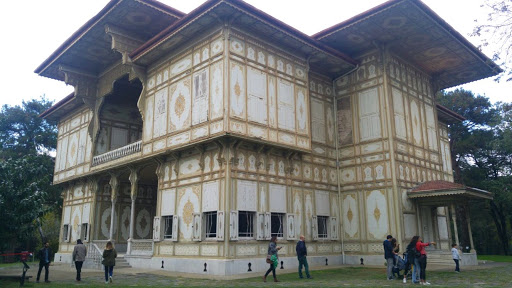 Not only is this beautiful region famous for being a popular excursion and entertainment spot at various times of the city's history, it was also where the grim Yildiz Trials were held. Sultan Abdulhamit II had Grand Vizier Mithad Pasha and his associates were accused of complicity and tortured in the Cadýr Pavilion (Çadýr Köþkü); only home to several tree species, the Yildiz Park Woods is one of the city's largest woods and dates back as far as the Byzantine era. Amongst the pavilions found nestled in the woods is Çadýr Pavilion, which was commissioned by Sultan Abdul Aziz. Constructed for daily excursions and as a lookout, the pavilion features one of the park's two large ponds in front. "foreign intervention saved his life. During his long reign the Ottoman Empire, Abdul Hamid II hired specialists to carry out repairs and had high walls built to surround the park decked out with new trees.

The park and its pavilions remained unkempt for a long time after he was deposed from the throne. Several years after the proclamation of the Republic, the park and the structures on the premises were dispersed under the management of three separate administrative bodies comprised of the Ministry of Culture, the National Assembly and the Istanbul Municipality.

Of these structures, Malta Pavilion is found in the lower part of the park and is currently operated by the Istanbul Greater Municipality. Fitting in with the natural surroundings, the pavilion is one of two that Sultan Abdul Aziz (1861-76) commissioned the Balyan Brothers to build after the Ciragan Palace for daily excursions in the woods. The source of the name of the pavilion has not been determined exactly. The two-story structure has a wide terrace. The lack of a bathroom inside or a toilet on the upper floor is indicative it was used for daily excursions. Columns supporting the upper floor balcony are seen at the entrance of the pavilion. Corinthian-order capitals decorate the tops of these round columns that have rectangular pedestals. There are two decorative columns between the windows which repeat on the lower and upper floors. The symmetric layout of the structure features a central hall with a pool on the lower floor. The rooms on either side of the hall, as well as two wall fountains on the wall of the staircase entrance at the upper floor have achieved a rich appearance. There is also a middle hall on the upper floor with rooms lined up around it.

Malta Pavilion remained abandoned for 40 years after Sultan AbdulHamid II was dethroned. Although it was opened for a while after 1950, the pavilion sustained major damage due to the additions made at that time as well as the dodgy renovation work. After an agreement made with the Turkish Touring and Automobile Association in 1979, the pavilion underwent a thorough renovation and was refurnished with the furniture, mirrors, chandeliers and oil paintings acquired from the marketplace. Amongst the paintings that decorate the walls is a portrait of Sultan AbdulAziz, who had the pavilion built. The pavilion is currently open to the public.

Another structure Sultan "Interior and exterior views of Malta Pavilion, in the lower quadrant of the park. The favorite architects of the era, the Balyan Brothers were commissioned by Sultan AbdulAziz to build this two-story pavilion. Featuring a wide terrace, this structure's outer facade is adorned with Corinthian-order columns. The burgeoning engraved embellishments in the interior are also quite striking."

"The bedroom inside the Yildiz Chalet, in the upper quadrant of the Yildiz Woods. As part of the palace, this pavilion accommodated important guests such as Kaiser Wilhelm II and his wife."

AbdulAziz commissioned the Balyan Family to build in the same region was Çadýr Pavilion (Çadýr Köþkü). Situated in front of one of the park's two pools, this pavilion and Malta Pavilion were built for daily excursions and viewing the surroundings. Constructed as a single-story over a basement with a low ceiling, the pavilion has a rectangular plan. Entry into this rather sedate structure is via a double-branch staircase. The ground floor door is found between the two stairway branches. The entry of the floor over the ground floor is arched in the shape of a semi-circle and features a rectangular window on either side. The facade of the pavilion overlooking the Bosphorus is in three sections and has a balcony bolstered by four buttresses. The ornate balcony door has a round arch. There are two pairs of rectangular windows on either side. This floor is comprised of three rooms, a large living room, a bathroom as well as a small hall with a connection to the ground floor, which has two large rooms, a chamber, a hall and a bathroom. The pavilion was embellished with fine examples of the decorative arts, including oil paintings of suspended flowers, branches and animal figures. Remaining in a state of disrepair for many years after Abdelhamid's dethronement, the pavilion was operated as the Tanzimat Museum for a while during the Republic era; it was renovated by the Turkish Touring and Automobile Association in 1979 and in later years. As with the Malta Pavilion, it was furnished with suitable furniture and paintings upon the completion of the renovation work. Today, Çadýr Pavilion is open to the public within the aegis of the Istanbul Greater Municipality. Situated in a section of the upper part of the woods blanketing the entire slope, Yildiz Palace is comprised of a group of pavilions found within a gigantic wooded area and gardens more reminiscent of the layout of Topkapi Palace than Dolmabahce Palace. After his coronation, Sultan AbdulHamid considered living on the seashore too dangerous and moved from Dolmabahce Palace to Yildiz Palace, adding some sections to this palace which belonged to Ciragan Palace. One of the structures connected with the palace is Yildiz Chalet (Yildiz Sale), which is also found in the upper quadrant of the woods. Situated in the part of the palace known as the third courtyard, the name of the structure comes from the French word 'chalet', meaning 'mountain home'.

Constructed "A panoramic view of the chalet's Grand Salon. The two marble fireplaces and the Pompadour-style mirror found to the side attract attention in the salon embellished with scenery paintings in the ceiling which is divided into three gold-gilded sections." from a combination of stone blocks and timber and surrounded by high walls, it is the most preserved structure of the palace.

The two-story Yildiz Chalet is comprised of three sections constructed at various times. The harem and selamlik sections incorporated in the Ottoman housing tradition are not visible in this structure despite the fact these sections fit in from a plan and façade standpoint. From a document dated 1880, it is believed the chalet's first section was built that year. Sultan Abdelhamid commissioned Sarkis Balyan to build the second section to accommodate Kaiser Wilhelm II and his wife in 1889. The third section was added by the architect, d'Aronco for Kaiser Wilhelm II's second visit to Istanbul in 1898.

This chalet is comprised of 60 rooms, three on the upper floor and the remaining rooms, including a large living room on the lower floor. A link between the floors is provided with a staircase designed by, d'Aronco and two other wooden staircases. The most striking section of the structure is the 30x15 m. Ceremonial Hall and is home to the largest Hereke carpet ever woven. 60 weavers worked on this single piece of floor covering that spreads out over 400 meters. Cassettes dividing the hall ceiling are embellished with gold gilding. Also known as the "Mother-of-Pearl Room (Sedefli Salon) the Banquet Hall, a grand dining room with Moorish ceilings and doors inlaid with mother-of-pearl that were brought from Ciragan Palace. The original furnishings of the hall, which is illuminated by three chandeliers, are at Beylerbeyi Palace; the space is embellished with a set of Louis XV-style furnishings. In addition to this hall, other important sections of the pavilion are halls such as the Grand Bedroom Hall, which is striking for its fabric-covered walls, and the Sirmali Hall', which used gold-and silver-thread for the original curtains and furniture. Administered by the Directorate of National Palaces, this chalet is currently open to the public. With its vast history stretching from the Byzantine to the Ottoman eras and into the Republic period, this fine wooded area still blankets the slopes of the Bosphorus with several tree species, it bears the quality of a museum conveying the former lifestyle of the Ottoman dynasty with pavilions and other historical structures it hosts on its terrain " A view of the splendid Banquet Salon of the Chalet Pavilion Famous for its inlaid mother-of-pearl door and cabinet covers brought from the Ciragan, this salon is also called the 'Sedefli Salon! The ceiling of this hall, which was once used to host banquets, is embellished with interconnecting star motifs. Of the three chandeliers that illuminate the hall, the one in the center is gold-gilded and enameled."