ISTANBUL, THE CITY OF SULTANS AND TWO CONTINENTS

Movies, songs, poems and novels... Istanbul, which has such a fascinating beauty that it will inspire all kinds of works of art you can think of, is one of the few cities not only in Turkey but also in the world. Located at the intersection of quite different cultures with its centuries-old history, the city fascinates with its unique texture as well as its natural beauties. Considered by some to be the "capital of the world", the city with seven hills is also a favorite of travelers from all over the world in terms of tourism. Here is the Istanbul city guide that will allow you to get to know this unique city with a texture oozing history from all sides.

What You Need to Know About Istanbul

One of the most emphasized features when describing Istanbul is, of course, the geographical location of the city. The city, which is located at the junction of Asia and Europe, is thus separated from many cities of the world. Being one of the rare cities spread over more than one continent, Istanbul also gains the title of intercontinental city with this feature. The lands of the city on the European continent are called the European Side, while the part on the Asian continent is called the Anatolian Side.

Located in the northwest of Turkey, on the coast of the Marmara Sea, the city is adjacent to only two provinces in terms of land borders. Tekirdag in the east and Kocaeli in the west is the neighbor of Istanbul.

When to go to Istanbul?

It is worth noting that the city with seven hills has a different beauty in every season. For this reason, you can plan your Istanbul trip at any time of the year. However, if you aim to enjoy the city streets without being affected by precipitation or cold, spring months are the ideal period for a trip to Istanbul.

Istanbul is the city where the heart of culture and art activities beats in Turkey, as in many other areas. It is possible to attend various festivals or cultural events in many venues throughout the year in the city. Events organized in many areas from cinema to music, from shopping to sports ensure that the city exhibits a very active structure in every period of the year. 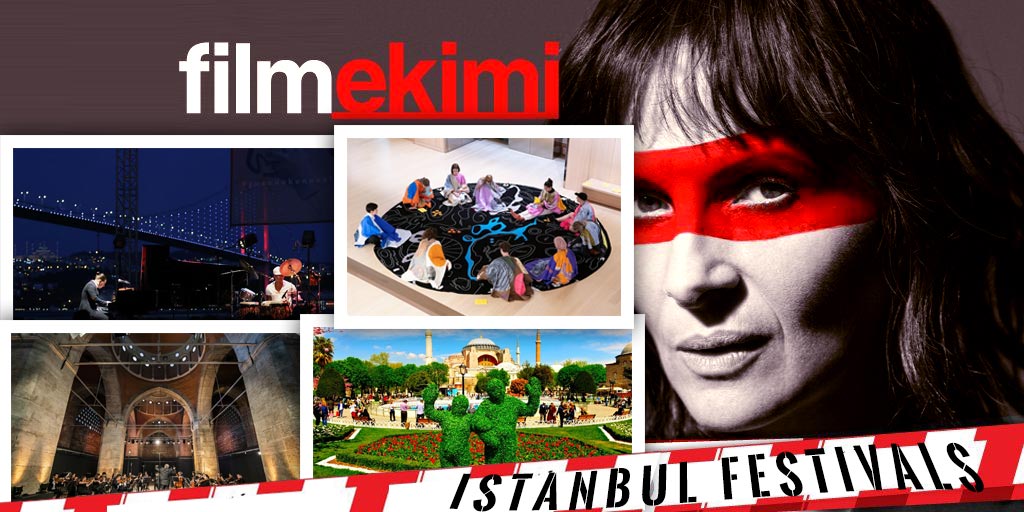 Here are the most important festivals of Istanbul:

How Many Days Do You Need To Stay To Visit Istanbul?

Even living in Istanbul may not be enough to fully tour Istanbul, which is a very rich city in every field. However, in order to see the most important places of the city, it will be enough to spare at least 1 week for your Istanbul trip.

How Many Days Do You Need To Stay To Visit Istanbul?

Even living in Istanbul may not be enough to fully tour Istanbul, which is a very rich city in every field. However, in order to see the most important places of the city, it will be enough to spare at least 1 week for your Istanbul trip.

How to go to Istanbul?

Istanbul, Turkey's most developed city in terms of socio-cultural terms, is also the center of air transportation. It is possible to reach Istanbul by direct flight from all cities in Turkey that have an airport. There are also direct flights to the city from many important cities of the world. If you want to reach Istanbul from the capital Ankara, you can travel the 350 km distance between the two cities in just 45 minutes with a direct flight. Flights from Izmir, another big city in Turkey, to Istanbul take approximately 1 hour.

Although Istanbul is a city famous for its traffic, it is one of the most developed cities in Turkey in terms of public transportation opportunities. There are 6 metro lines that provide transportation to many different areas in the city. In addition, the services called Metrobus serve on both sides of the city. Another public transportation vehicle that can be used to cross from the European side to Anatolia is Marmaray. The train line, which passes under the sea and reaches the opposite side, covers 42 stops.

IETT buses are also an important part of public transportation in Istanbul. It is possible to reach almost every point of the city with IETT buses. In addition, minibuses and minibuses serve in some areas of the city.

Transportation from Istanbul Airport to the City Center

Istanbul Airport, which was put into service in 2018, is located on the European side of the city. The airport, located on the Black Sea coast, can be reached by buses. Bus services called HAVAIST (Havas) provide service 24 hours a day, 7 days a week for Istanbul Airport transportation. You can reach 46 different points of the city with HAVAIST flights, where payment by IstanbulKart or credit card is accepted. There are also IETT flights to Istanbul Airport from 8 different points. If you wish, you can also choose IETT buses for transportation.

Transportation from Sabiha Gokcen International Airport to the City Center

Located on the Anatolian side, Istanbul Sabiha Gokcen Airport is located within the borders of Pendik district. Considered one of the fastest developing airports in Europe, Sabiha Gokcen is 50 km from Taksim and 40 km from Kadikoy. The area can be reached by bus services called HAVABUS as well as IETT buses departing from various regions. HAVABUS services departing every half hour depart for Taksim and Kadikoy routes. In addition, buses drop passengers at some central places on the route.

Places to Visit in Istanbul

Istanbul is one of the richest cities in the world in terms of places to visit. The city, which has hosted many civilizations throughout history, bears the traces of many different cultures. There are countless historical buildings in the city, which gives full justice to being a cosmopolitan city. In addition to its historical texture, the city, where you can see the most special works of modern architecture, offers a rich variety to travelers from all walks of life. 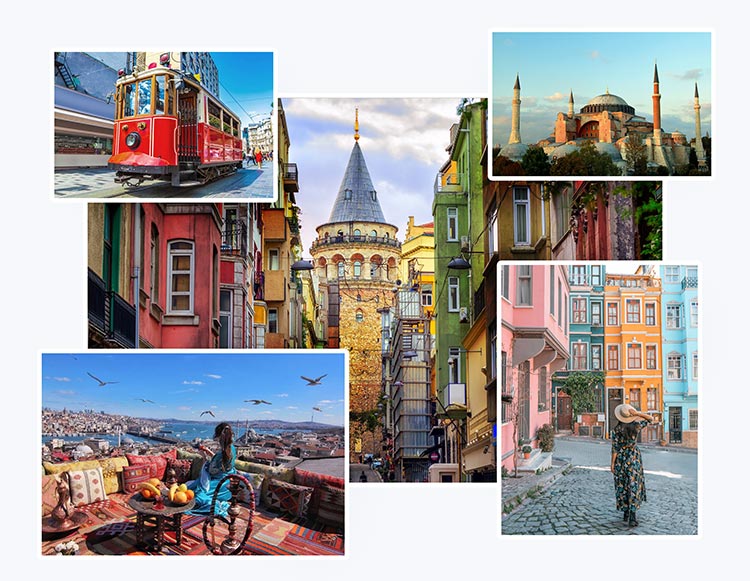 The region, known as the Historic Peninsula or Surici, is considered the historical center of the city of Istanbul. The region is strategically important with its geographical location as well as being the place where the city was first established. It is estimated that the first settlement in the Historic Peninsula dates back to 685 BC. The peninsula, surrounded by the Golden Horn, the Bosphorus and the Sea of Marmara, is also a frequent destination for travelers traveling to Istanbul. Eminonu and Sirkeci are among the most popular travel routes in the region. You should definitely see places such as the Spice Bazaar, Sirkeci Train Station, Yeni Mosque and Eminonu Square on your trip to the region.

Another important center of the Historic Peninsula is, of course, Sultanahmet. The area, which also hosts the Hagia Sophia Museum, one of the most important structures in the world, also includes the Blue Mosque and Sultanahmet Square. A little ahead of the Sultanahmet area, Beyazit with its world-famous Grand Bazaar is located. Beyazit region is also among the places you should definitely see, as it is home to numerous historical places. Topkapi Palace, which was the scene of the most glorious years of the Ottoman Period, is one of the most important stops of the Historical Peninsula tour. If you want to visit the palace, which is located in the area called Cankurtaran, you need to spend at least one day for this activity.

Considered by some to be the center of Istanbul, Taksim is located in the Beyoglu district of Istanbul. Istiklal Avenue is undoubtedly the most important street of the region, where the heart of shopping beats as well as many branches of art. There are also countless shops, cafes and restaurants on the street that starts from Taksim Square and extends to the Tunel area. Starting your tour from the Ataturk Monument in Taksim Square, you can discover the unique texture of Istiklal Street and find the opportunity to get to know this region, which is of vital importance for Istanbul.

Where to Stay in Istanbul?

In many parts of Istanbul, there are many hotel options that appeal to all kinds of budgets. Especially the Taksim region is extremely rich in terms of hotels. The hotels located around Taksim Square and in the Talimhane region are preferred because they are in a very central location and provide quality service. In addition, Sultanahmet, another touristic center, has many hotels and pensions. If you prefer to stay on the Anatolian side, you can head towards central areas such as Kadikoy or uskudar.

What to Eat in Istanbul?

From a historical perspective, Istanbul cuisine actually means palace cuisine. The unique traditional dishes of the city, which is home to Topkapi Palace, are naturally preferred in the palace. Today, however, it is possible to experience a wide variety of flavors from both Turkey and the world in Istanbul. But if you want to taste the special flavors of the city on your Istanbul trip, you can try Vefa Bozacisi's boza, Sultanahmet's unique taste, Sultanahmet meatballs, Kanlica's yoghurt beyond its borders, or Ortakoy's baked potato.

Other famous tastes that you should not leave without tasting in Istanbul are as follows:

What Gift to Buy from Istanbul? Where to Shop?

For shopping lovers, Istanbul is literally a shopping paradise. Almost every district of the city has several large shopping centers. Many places such as Cevahir AVM, Zorlu AVM, Kanyon and Emaar AVM are among the frequent destinations of shopping enthusiasts visiting Istanbul. In addition, places such as the Grand Bazaar and Spice Bazaar in the Historic Peninsula offer a rich variety to those who enjoy authentic products. If you do not want to return from your Istanbul trip without buying gifts for your loved ones, you can evaluate the woven products or traditional jewelry in these bazaars. In addition, Galata and Ortakoy regions are among the ideal addresses for those who are looking for souvenirs.

Istanbul is undoubtedly the city with the most active nightlife in Turkey. As in all major metropolises, life in Istanbul continues 24 hours a day, 7 days a week. Nightlife in the city is concentrated in certain areas. Districts such as Taksim, Besiktas and Ortakoy on the European side and Kadikoy on the Asian side are the scene of the most active moments of Istanbul nightlife. Places such as restaurants, cafes, bars and nightclubs in all these regions serve until late at night.

What You Need to Know Before Going to Istanbul

You should not forget to take into account the traffic in Istanbul while planning your urban journey.

You can buy IstanbulKart to benefit from public transportation vehicles in Istanbul at more affordable prices.

Some metro lines in the city operate 24 hours on Friday and Saturday.