The New Mosque was the last of the great mosques built by Ottoman sultans. Its foundation was laid in 1597; however, for various reasons it was not completed for 66 years. 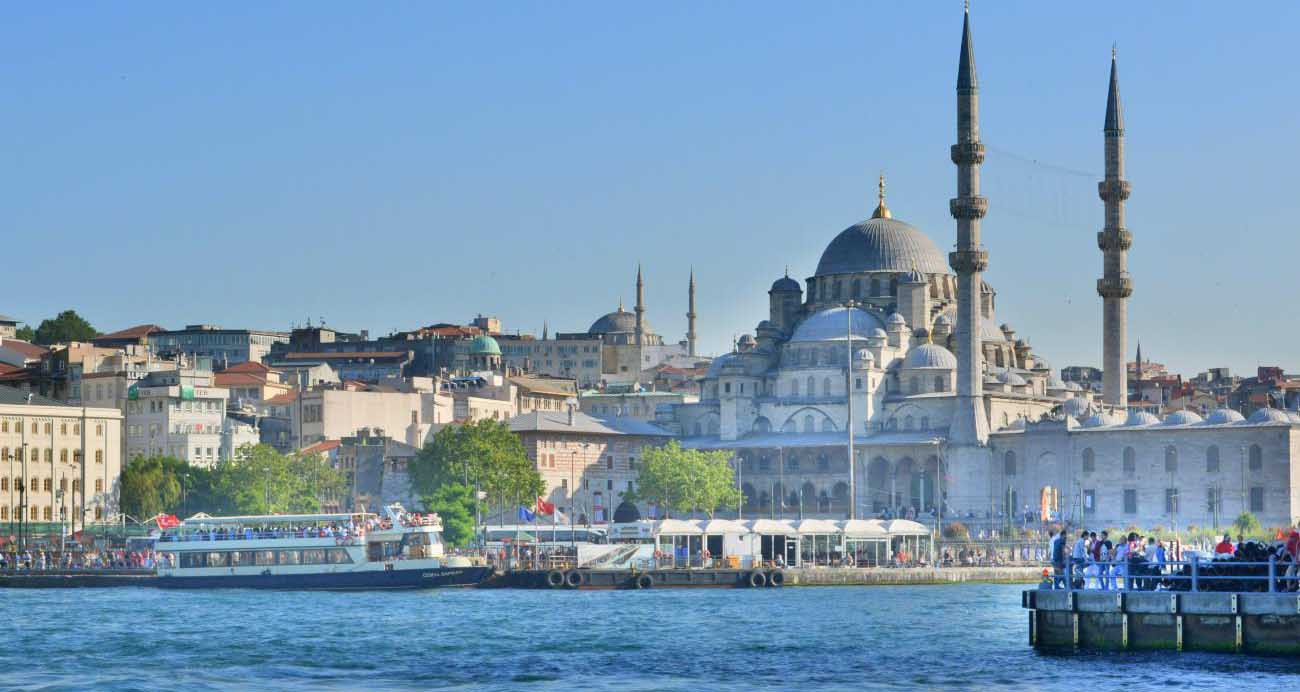 Three architects worked separately on the construction. Safiye Sultan, the Venetian wife of Sultan Murat II and mother of Sultan Mehmet wanted a mosque built in her name. This duty was given to the architect Davut Aka, a student of the great architect Mimar Sinan. Davut Aka determined the site for the mosque and drew up plan, Thisivas to be Istanbul's first large mosque along the seashore. In August of 1597 a ceremony was held, with top state officials present, to lay the foundation. 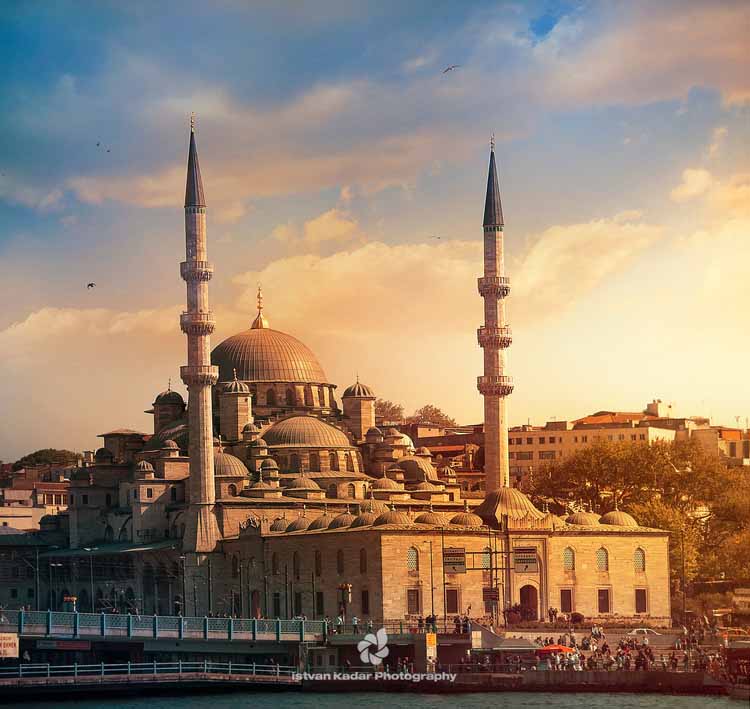 However, there was a major problem: wherever they dug, water poured out. They worked to empty the water with pumps and mill wheels. Davut Aga was determined to overcome this obstacle. After the water was dried out, the construction began. The stones for the building were brought from Rhodes. In the midst of this painful construction, Mehmet III died, and, according to tradition, the Mother. Sultan was sent to the old palace. The construction of the mosque was stopped in the middle, and for almost 57 years the mosque was abandoned to its fate. 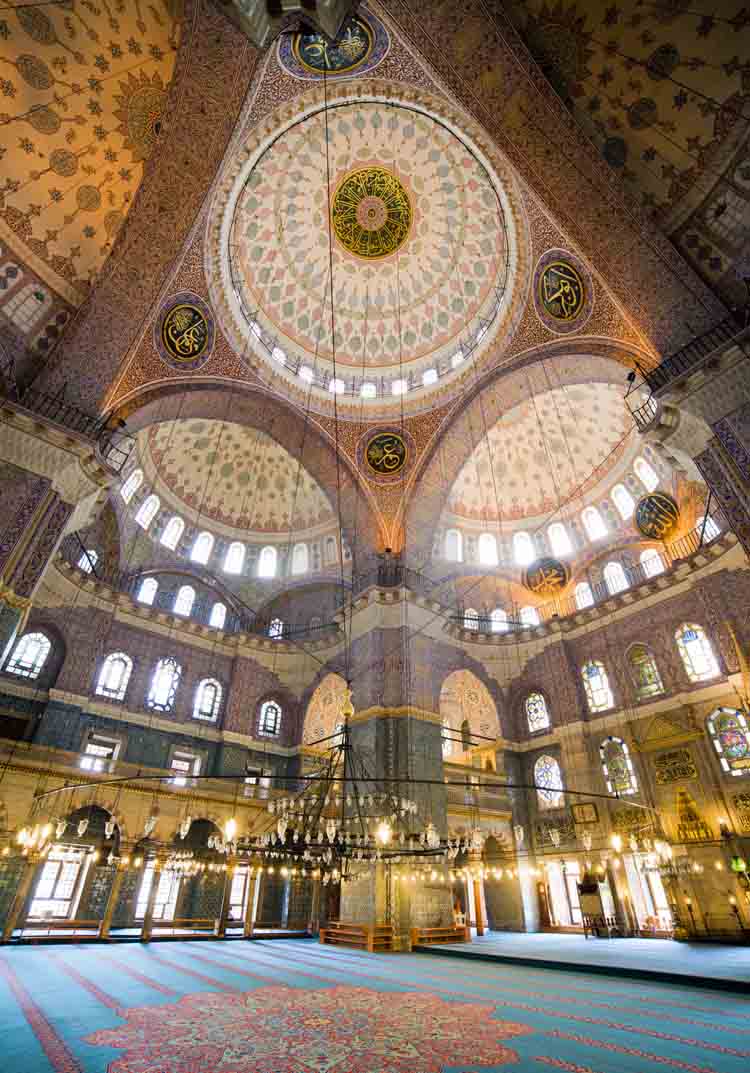 Tinze took its toll, and a fire left it greatly damaged. During the reign of grand vizier Koprtilii Mehmet Pasha, the mother of Sultan Mehtnet IV, Hatice Turban Sultan, was touring the city after a fire Upon seeing the unfinished mosque in such a state of ruin, she determined to complete the building. Tice head architect of the time, Mustafa Aga, began the construction, using Davin Aga's plans. The mosque was completed in three years. On February 8, 1663, it was ceremonially opened to worship. The architecture of the Now Mosque has no Sekuk influence. It uses the domed plan of Mimar Sinan's Sehtzade Mosque. However, with its dome rising like a pyramid, it has its own unique appearance. The main dome of the rests on 4 elephanet feet. The minber is of hollowed out marble, a delicate work of art.

Fountain in courtyard is one of the jewels of Turkish Art. Encircled by four half-domes, the tnain dome--36m high, 17 tn in diameter with 24 windows-is set on a white base. The mosque's white marble,' minber and window covers of pearl inlay are delicate works of art. Above the windows are suralts and vers. from the Koran written by Mustafa Celebi. A marketplace (she Egyptian, or Spice Bazaar), kiosk for dispensing drinking water, a university, and a school were built along with the mosque. The L-shaped Spice Bomar is second in attraction to the Covered Bazaar among historical markets.

What makes the New Mosque so special is the Sultan (or Mother Sultan) Kasri (pleasure palace) on essarch connected to the mosque. It is a beautiful example of 17th century Turkish architecture. In the years of its construction the Mother Sultan, later sultans themselves, would come here to rest fees bit before prayers and religious ceremonies. The woodsvork of the entrance door, the tiled stoves, the tile panels of the walls, the colorful glass windows are worukrful. The tiles were made in Iznik, some specially ornamented for this palace. Their designs are found nowhere else. The panels are decorated with carnations, roses, peonies, various branches and leaves. Just as the New Mosque is the last example Of mosques built by Sultans, so the tiles decorating the SULTAN KASRI are the last and best example Turkish tiles. 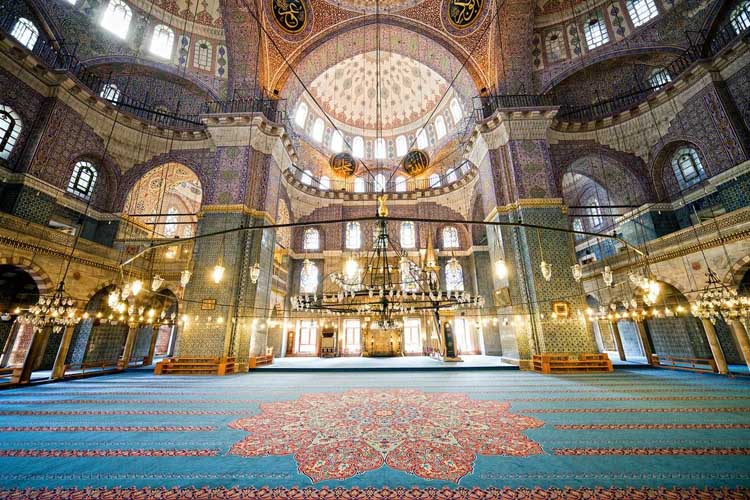 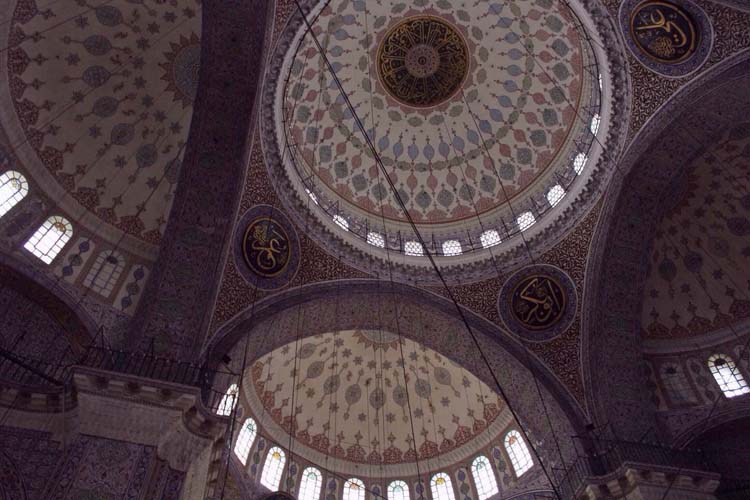 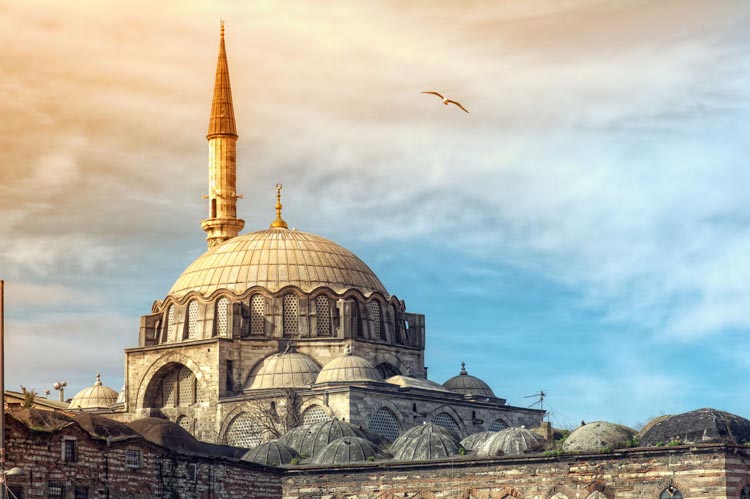